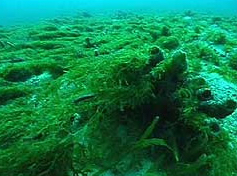 Species Description: Caularpa brachypus is a chlorophyte (green) macroalga with green leafy blade-like fronds attached by stem-like rhizoids to horizontal runner-like stolons. The thallus (leaf-like portion) is green sometimes with a yellowish margin, and is ribbon-like or tongue-like in appearance (ANSTF 2004).

Potentially Misidentified Species: At least 30 distinct Caulerpa species and strains are found in coastal waters of the U.S. and its territories (ANSTF 2004), so misidentification of co-occurring congeners is common. Potentially confounding identification further is the fact that members of the genus exhibit a considerable degree of phenotypic plasticity, meaning that details of their physical appearance can be modified based on local environmental conditions.

Regional Occurrence: C. brachypus is a Pacific species whose natural range extends throughout the Indo-Pacific tropics and subtropics, including East and Southeast Asia, the Pacific Islands, East Africa, the Indian Subcontinent and Indian Ocean, Australia and New Zealand.

C. brachypus was reportedly first encountered in Florida in 1999 (but see below), occurring on reefs off of the southern coast of the state (ANSTF 2004).

IRL Distribution: Scientists first detected Caulerpa brachypus in the southern IRL in 2003. Initial concerns that the alga would gain a foothold and quickly spread through the IRL have been partially allayed with the finding that it is largely intolerant of the high-light conditions characteristic of the shallow IRL system (Brian LaPointe, personal communication).

Abundance: Caulerpa brachypus can grow so dense as to completely cover the nearshore Florida reefs on which they occur.

Temperature: Caulerpa brachypus is a warm-temperate to tropical species as indicated by its expansive native range. Off of south Florida, the alga has been collected at depths ranging from 25-47 m, corresponding to temperatures ranging from 24-28°C (ANSTF 2004).

Notwithstanding the above, tolerance of low water temperature is one of the traits of the highly invasive congener Caulerpa taxifolia, and this may apply to C. brachypus as well (Silva 2003, ANSTF 2004).

Light: This species grows best under low light conditions as indicated by its deep (> 30 m) abundance maximum. Lapointe and Yentsch (2003) report a high photosynthetic yield and low respiration rate that is characteristic of a shade-tolerant alga. The authors suggest that shade tolerance is a trait that likely contributes to the species' ability to thrive in dense mats (> 60-90% cover) on the deep reefs they are overgrowing.

Salinity: Salinity tolerance limits for Caulerpa brachypus appear as yet undetermined, although C. racemosa has been demonstrated to cease growing if salinity is reduced to 20 ppt and C. taxifolia is killed outright when salinity is reduced below 10 ppt (Carruthers et al. 1993, ANSTF 2004).

Associated Species: In Florida there are few if any herbivores that readily consume this alga, though the reasons for this are not entirely clear. Preliminary evidence from studies on the coast of Florida suggests that the defensive compound caulerpenyne may not be present in sufficient quantities in Caulerpa brachypus to deter grazing by generalist herbivores (e.g., parrotfish), but that the chemical may still be important as an activated defense compound (Lapointe and Yentsch 2003).

Invasion History: Caulerpa brachypus was conclusively identified in Florida waters in mid-2001, although reports exist suggesting that south Florida divers may have first encountered the alga in 1999. The alga was most likely accidentally released to Florida waters from a saltwater aquarium environment or in ballast water by the shipping industry.

Lack of natural herbivore predators and able competitors, combined with the elevated nutrient status of Florida coastal waters helped set the stage for explosive growth and spread of this species. By early 2003, C. brachypus had become so thick on reefs off of Palm Beach County that it was causing fish and lobsters to leave the area. By this time, the alga had been observed as far north as Fort Pierce (St. Lucie County).

In 2004 hurricanes Francis and Jeanne removed nearly all of the invading C. brachypus from coastal sampling sites. The following year, small pioneering populations reappeared at these sites but they appeared at first to have difficulty becoming established. By the summer of 2006, however, reef-smothering quantities of C. brachypus were again encountered on deepwater coastal reefs. Natural reefs at depths ranging from 20-30 m in Martin and Palm Beach counties were reported to be from 70% to 90% carpeted by dense mats of C. brachypus (Brian LaPointe, personal communication).

Potential to Compete With Natives: Caulerpa brachypus can become so thick on reef sites it may kill corals, sponges, and other sessile organisms outright, while forcing mobile species like fish and lobsters to abandon the area (ANSTF 2004).

Possible Economic Consequences of Invasion: There is little information available about how far-reaching the coastal Caulerpa brachypus infestation is or how fast it is spreading.
Excess nutrients in coastal waters are believed to be a primary cause of excessive algal blooms that can be harmful to nearshore and inshore ecosystems. Human sources of nutrient enrichment in Florida include surface and groundwater discharge to coastal waters, and possibly also seepage from deep injection wells. In southeast Florida, offshore ocean sewage outfalls are also significant contributors of excess nutrients; cumulatively, these outfalls discharge about 400 million gallons of sewage (post-secondary treatment) per day (Dr. Brian LaPointe, personal communication).

Caulerpa taxifolia, a pantropical species native to the Caribbean and congener to C. brachypus, is the now infamous "killer algae". C. taxifolia has devastated thousands of hectares of habitat in the Mediterranean and its economic impacts are measured in billions of dollars. This species has also been introduced to southern California coastal waters, and extraordinary measures are being taken to ensure that the alga does not establish itself as it did in the Mediterranean. Caulerpa brachypus now infesting Florida may not be quite as pernicious as Mediterranean C. taxifolia, but current indications are that the threat should not be taken lightly (Glardon et al. 2005). 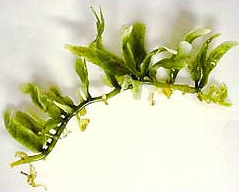