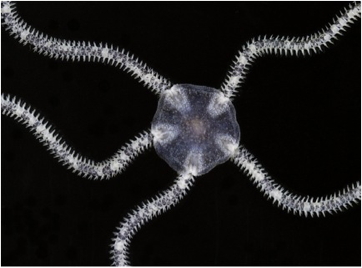 Species Description: Amphioplus thrombodes is one of several small brittle stars occurring in the Indian River Lagoon. The bumps on the edge of the dorsal scales give the disk a rough, papillate texture (Thomas 1962, Hendler et al. 1995). The five arms have three spines each. The middle spine is thickest and slightly compressed. The disk is pale gray and speckled with brownish scales. The radial shields are joined distally, are tipped in white, and are twice as long as they are wide (Thomas 1962). The arms are pale tan and blotched with dark gray (Hendler et al. 1995).

Potentially Misidentified Species: A. thrombodes resembles A. sepultus, except for the presence of bumps on the edge of the dorsal scales in the former species (Hendler et al. 1995). A. thrombodes also exhibits only a single pair of tentacle scales on most arm joints, and a narrower tip on the middle arm spine.

IRL Distribution: This brittle star is found from Fort Pierce to the southern tip of the IRL.

Abundance: The sex ratio in populations of A. thrombodes at Cedar Key, Florida has been documented as 1 male to every 0.79 females (Stancyk 1970).

Associated Species: A. thrombodes has been collected with other burrowing brittle stars such as A. sepultus (Hendler et al. 1995).