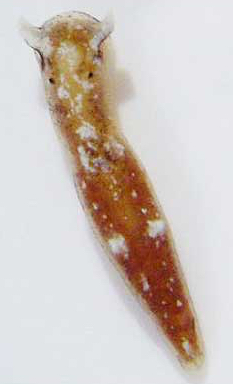 Species Description: The seagrass elysia, Elysia serca, is a small opisthobranch mollusc of the Order Sacoglossa. The body color is variable, ranging from green to dark brown. A characteristic pattern of dorsal whitish patches is also usually present, with one patch on the body at about the heart and two more located midway along the free edge of the parapodia. Other smaller white spots may be present as well. Relative to other elysiids, the head is proportionally larger and the parapodia are somewhat reduced (Rudman 2004a).

Jensen (1983a) notes that the shape of the radular teeth of E. serca is indistinguishable from that of another seagrass-feeding ascoglossan, Elysia catulus. The author suggests that E. serca may be an ecotype or subspecies of E. catulus. In light of this, relevant information from the literature pertaining to E. catulus is included here along with that for E. serca.

The distinctive physical appearance of E. tuca (see above) combined with the strong association of all members of the genus with their respective preferred food sources (seagrass in the case of E. serca), should be sufficient to allow differentiation of the seagrass elysia from co-occurring Elysia species.

Regional Occurrence: Elysia serca is a subtropical to tropical species, occurring in the western Atlantic from Florida to Brazil (Rudman 2004a). Elysia catulus, a possible northern morph with older synonymy, is distributed along the Atlantic coast of North America from Nova Scotia to South Carolina (Rudman 2004b). Clark (1975) notes that the larvae of most nudibranchiate molluscs from southern New England waters, including E. catulus, are allochthonously produced, not the result of endemic reproduction.

IRL Distribution: Although cryptic in its occurrence, Elysia serca may well be found throughout the seagrass beds of the Indian River Lagoon system.

Information on the lifespan of Elysia serca in Florida is lacking. The lifespan of Connecticut Elysia catulus individuals appears to be just under one year. Newly settled individuals arriving in late August and early September, growing to maturity over the next several months, producing eggs in June and July, and disappearing (apparently due to mortality) by late July just prior to the next juvenile settlement event (Clark 1975).

Abundance: Clark (1975) reports Elysia catulus is one of very few nudibranchiate molluscs present in abundance in the Mystic River Estuary, CT, throughout all or most of the year. For all months except late summer, the author was able to collect more than 50 individuals per hour and noted its presence virtually wherever Zostera marina occurred. As with most nudibranchiate molluscs, the sudden appearance of large E. catulus populations is due to the arrival of large numbers of settling larvae followed by the rapid growth of newly settled individuals to visible size.

Reproduction: Sacoglossans are simultaneous hermaphrodites that cross-fertilize by means of copulation and internal fertilization (Fox 2001).

In Connecticut E. catulus populations, individuals that settled out of the plankton as juveniles in late summer begin producing eggs the following June. Mean animal length decreases throughout the egg production period, apparently due to tissue resorption to offset the energetic cost of reproduction. Spiral E. catulus egg masses, containing as many as 1,000 eggs, are typically attached to the top 1/3 of a Zostera seagrass blade. All adults disappear in late July after the period of egg production has ended (Clark 1975).

Temperature: The subtropical/tropical Elysia serca is restricted to warm waters from Florida to Brazil. Low water temperature is likely the key factor restricting the northern distributional limits of the species.

Elysia catulus exhibits significantly more thermal tolerance. Animals in Connecticut's Mystic River Estuary persist in habitats that exceed 27°C in the summer and are susceptible to ice formation in winter (Clark 1975). Clark (1975) reports a behavioral response of E. catulus to the onset of cold temperatures in which individuals seek the shelter of the crevice within the fascicle binding adjacent seagrass leaves.

Salinity: While a review of the relevant literature suggests a lack of extraordinary tolerance to salinity fluctuation, the presence of Elysia serca in habitats of seasonally varying salinity suggest the species is at least somewhat euryhaline.

Trophic Mode: Elysia serca from Florida have been reported feeding on several species of seagrass, including Halophila engelmanni, Halodule beaudettei, (formerly Halodule wrightii), Syringodium filiforme, and Thalassia testudinum (Jensen 1983b). Young plants with fully developed blades and no epiphytes or epifauna are preferentially consumed, and animals collected from Halophila engelmanni were larger than those collected from Thalassia testudinum (Jensen 1983a).

The feeding strategy is typical of sacoglossans, with plant cell walls punctured by means of the radular tooth and liquid cell contents withdrawn via suction and ingested (Clark 1975). Plant cells which have been pierced and sucked dry are visible as darker areas on leaf surfaces.

Food preference and growth experiments conducted by Jensen (1983b) suggest that Halophila engelmanni is a preferred food source and also the Florida seagrass species that allowed maximal growth. The author postulates that the preference for and marked growth on H. engelmanni is the result of the large epidermal cells of this seagrass that allow exploitation of this food type by the size and shape of the leading radular tooth in E. serca. Preference for H. engelmanni may also be due to the absence of tannins, which are present in some other seagrasses and offer a degree of chemical defense against herbivores.

Clark (1975) confirms that Mystic River Estuary E. catulus populations lived on and consumed the seagrass Zostera marina. The author notes that this is the first-ever report of a sacoglossan which feeds on a spermatophyte plant.

Competitors: Despite the co-occurrence of several Elysia congeners in the IRL and elsewhere in Florida, the dietary specializations particular to each species very likely preclude severe interspecific competition for food resources. The persistence of the species at relatively low overall density relative to the availablility of seagrass suggests that food availability is not a likely limiting resource.

Predators: No major predators on seagrass elysia are reported in the literature.

Habitats: Elysia serca is strictly associated with subtropical to tropical seagrass habitats. The seagrasses act as both living space/refuge and food source for this animal.

Activity Time: Detailed information is lacking, but an abundance of daytime encounters by investigators suggests much of the foraging activity of the species is carried out during the day (Rudman 2004a).

Economic/Ecological Importance: Clark (1975) suggests that the feeding strategy (cell piercing) of Elysia catulus may have allowed the animal to serve as a vector in the transmission of the Zostera wasting disease that decimated Zostera seagrass populations in the early 1930s. The author notes, however, that the actual act of feeding causes negligible damage to seagrasses, due to the relatively small size of E. catulus populations.

Clark KB. 1975 Nudibranch life cycles in the northwest Atlantic and their relationship to the ecology of fouling communities. Helgolander wiss. Meeresuntersuchungen 27:28-69.

Jensen KR. 1982. Occurrence of Elysia serca Marcus in Florida, with notes on the synonymy and biology of the species. Journal of Conchology 31:87-94.