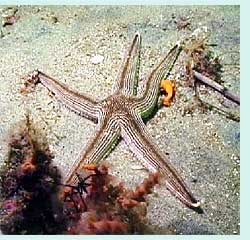 Species Description: Luidia clathrata is a member in the family Luiidae. This sea star has a small central disc surrounded by five long, flat arms. The arms contain tube feet which are used for locomotion (Pomory and Lares 2000). The arms of the gray sea star are 2 - 3 times the size of the disc diameter. The surface of the body is covered in plates. The upper surface of the body ranges from gray to light brown, rose or salmon color, although most living specimens are gray. This species differs from other Luidia species by the dark gray or black stripe on the dorsal midline of each arm (Hendler et. al. 1995). Behavioral studies of L. clathrata have shown that this species displays negative phototaxis and will burrow in the sand to avoid light (Hendler et. al. 1995).

Regional Occurrence: Luidia clathrata occurs from the Virginia coast to Brazil in the Atlantic Ocean and as far west as Alabama in the Gulf of Mexico (McClintock and Lawrence 1985, Miller and Lawrence 1999). The gray sea star is found at depths from 0-100 m but usually encountered in shallow-waters less than 40 m, on soft bottom habitats (Hendler et. al. 1995, Pomory and Lares 2000).

IRL Distribution: The gray sea star is common in the IRL and other Florida waters (Miller and Lawrence 1999).

Regeneration: The arms of Luidia clathrata can be lost as a result of predation. This process can affect the ability of an individual to survive because the arms are important for locomotion, feeding, energy storage, and reproduction (Lawrence et al. 1986, Pomory and Lares 2000). Regeneration of the exposed end of the damaged arm begins by immediately sealing the damaged area. A new tip appears in approximately one week (Lawrence et al. 1986). The average rate of regeneration in field collected specimens has been reported to be approximately 3.7 mm per month. Arms appear to regenerate at a quicker rate until they reached 40-50% of the total length (Pomory and Lares 2000). In laboratory experiments, although the rate of regeneration was shown to be a function of food availability, regeneration did occur even when the animal was starved (Lawrence et al. 1986).

Embryology: The gray sea star has one larval stage before metamorphosis, a large bipinnaria larva (2 mm long) that is competent (ready for metamorphosis) within one month.

Temperature: There are no studies specifically addressing the temperature tolerance of the gray sea star.

Trophic Mode: The gray sea star is a forager that can feed on a variety of different taxa including foraminiferans, nematodes, ostracods, gastropods, bivalves, crustaceans, as well as sediment and detritus. In Tampa Bay, Florida, Luidia clathrata prefers the bivalve Mulinia lateralis (McClintock and Lawrence 1985). This sea star obtains its food by ingesting sand and mud and then straining this material through oral spines (Hendler et al. 1995). When it is buried, it will evert its stomach to feed on detritus (Hendler et al. 1995).

Pomory CM and MT Lares. 2000. Rate of regeneration of two arms in the field and its effect on body components in Luidia clathrata . Journal of Experimental Marine Biology and Ecology 254:211-230.

Watts SA and JM Lawrence. 1990. The effect of temperature and salinity interactions on righting, feeding and growth in the sea star Luidia clathrata. Marine Behavior and Physiology 17:159-165.