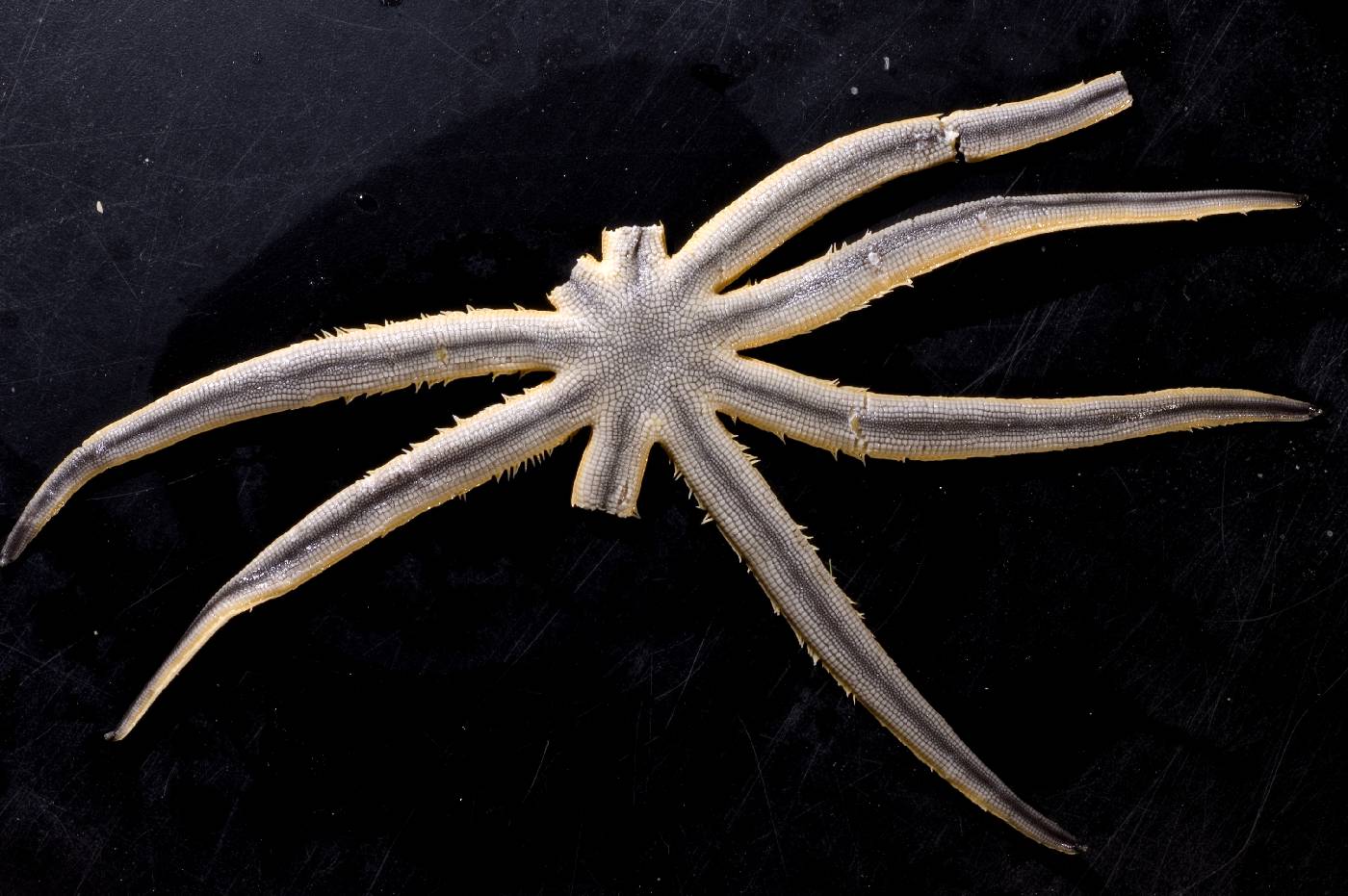 Species Description: Luidia senegalensis is an unusual member of the Asteroidea in that it possesses nine arms, which are long and thin. Members of this genus lack tube feet suckers and an anus (Brusca and Brusca 1990). The dorsal surface (back) of the nine-armed sea star is covered by close-set plates from square to irregular shape and fringed with spines. Plates that carry the spines are yellow and the spines are white. The square plates on the margin are cream-colored and the irregular plates along the mid-line are dark grey. Museum specimens are characterized by the dark midline. Ventrally the plates and spines are both white and the tube feet are transparent. The disk appears circular in outline in living individuals (Hendler et al. 1995).

Regional Occurrence: Luidia senegalensis occurs in subtropical and tropical east and west coasts of Florida as well as the Keys, the Greater and Lesser Antilles, and the coast of South America to southern Brazil (Hendler et al. 1995, Miller and Lawrence 1999). It occurs from the low tide line to 46 meters. The nine-armed sea star is found in calm lagoons in sandy or muddy sediments. In Southwest Florida, it can be found on quartz sand and hard shells (Hendler et al. 1995).

IRL Distribution: Luidia senegalensis is found sporadically in the Sebastian Inlet to the southern points of the Indian River Lagoon (Hendler et al. 1995).

Abundance: The nine-arm sea star is reported to be more abundant in the coastal waters of southeastern Brazil (Pires 1992).

Reproduction: Luidia senegalensis reproduces annually with considerable seasonal variation among different populations. For example, in a population off of Naples, Florida, gonadal development was reported to begin in the winter, with the gonads reaching full size just before spawning in the late summer-early fall, while a population in Tampa began gonadal development in the fall followed by a spring spawning cycle (Miller and Lawrence 1999).

Embryology: Within 48 hours, the fertilized eggs of the nine-armed sea star develop into a feeding form called a bipinnaria larva. At 25 days the largest bipinnaria is approximately 1000 µm long and 350 µm wide and ready for metamorphosis. At this stage, it has two well developed ciliary bands and five pairs of binpinnaria arms. These larval structures are reabsorbed into the animal after metamorphosis (Komatsu et al. 1991).

Temperature: There are no specific studies addressing the temperature tolerances of larval or adult stages of Luidia senegalensis.

Salinity: There are no specific studies addressing the salinity tolerances of larval or adult stages of Luidia senegalensis.

Trophic Mode: Luidia senegalensis is a mobile soft bottom predator and scavenger, feeding on infauna and detritus. It will ingest sand and mud, straining the soft sediment through oral spines that retain prey such as small mollusks, crustaceans and brittle stars. When L. senegalensis is buried, it will evert its stomach to feed on detritus (Hendler et al. 1995).

Associated Species: Specimens of the nine-arm sea star collected from the Fort Pierce Inlet in the Indian River Lagoon have a dark brown, commensal polychaete worm, Podarke obscura Verrill, living in the ambulacral groove. Several worms can be found on one adult L. senegalensis (Miller and Lawrence 1999). 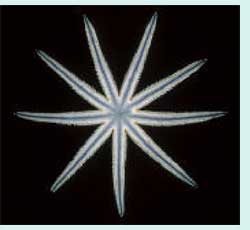