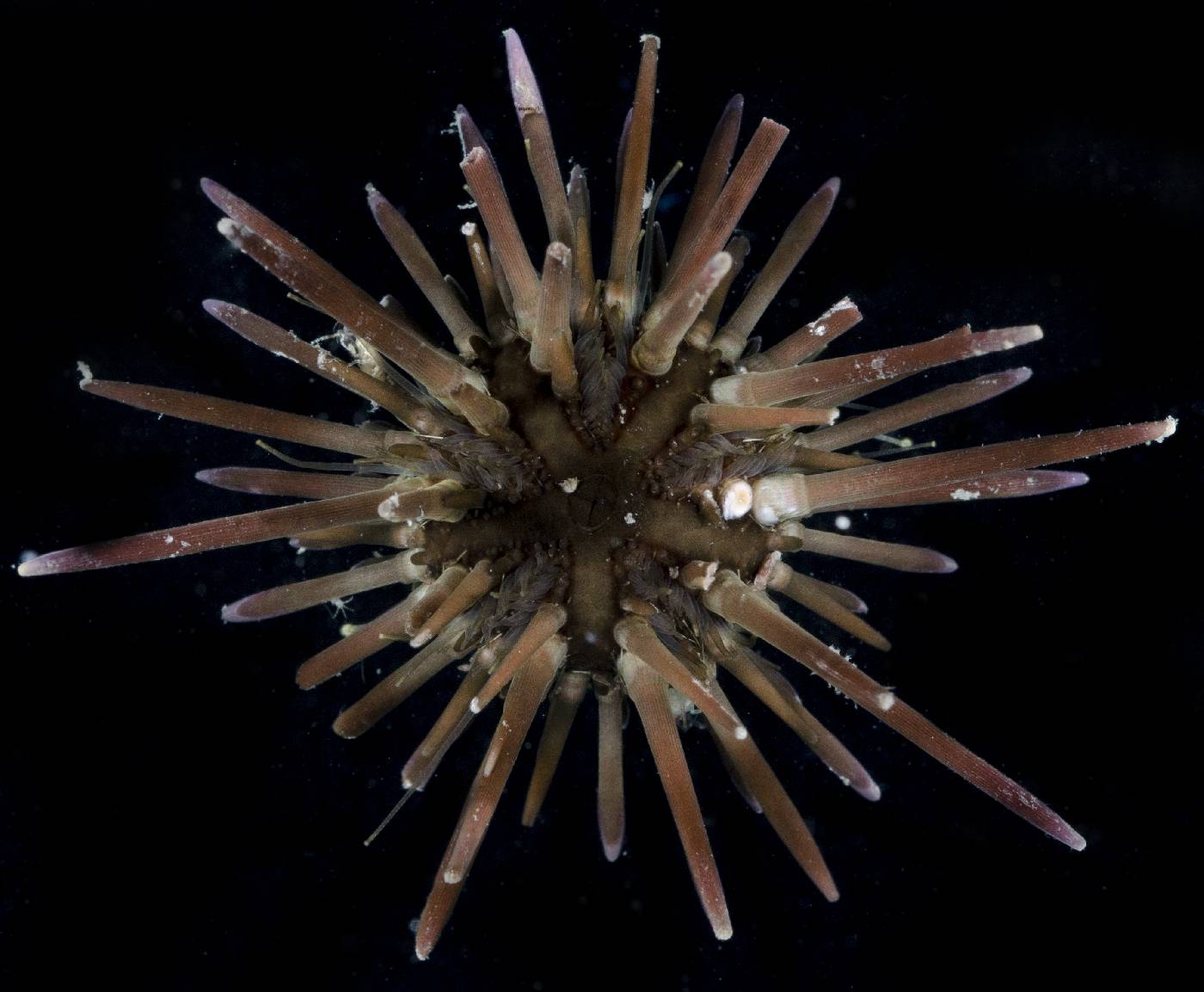 Species Description: The purple-spined sea urchin, Arbacia punctulata, is named for its long slender spines, which are often purple to brown in color. However, spines of some individuals can also vary in color from reddish or reddish gray to almost black (Harvey 1956). The spines are generally the same color as the fused plates of the outer skeleton, or test, and the muscle bases are whitish with several brown to purple spots (Hendler et al. 1995). Tube feet are olive in color and inconspicuous aborally. Stalks of the aboral pedicellariae share the same color as the muscle bases. The oral side of the test is light brown to light purple, with a white peristome area, and silvery white circumoral feet with white terminal disks. The oral primaries are lighter than the aboral primaries, and sometimes appear with white and pink bands.

The area of the apical system is naked, as are the interambulacral areas on the upper surface of the test (Hendler et al. 1995). Four prominent plates cover the periproct. Pore pairs are arranged in a vertical series, and the interambulacral tubercles are equal in size. While most urchins possess both long primary and short secondary spines, A. punctulata possesses only the long type (Ruppert & Barnes 1994).

Habitat & Regional Occurrence: A. punculata occurs in beds of the turtle grass, Thalassia testudinum, under coral rubble, and on rock, sandy or shelly bottoms (Hendler et al. 1995). Most individuals reside in shallow waters less than 50 m deep, although A. punctulata has been found down to 225 m (Serafy 1979).

The range of A. punctulata extends from Maine to Cuba, the Yucatán Peninsula, Florida to Texas in the Gulf of Mexico, Panama to French Guiana and north to Barbados (Serafy 1979, Kaplan 1988).

IRL Distribution: The distribution of A. punctulata in the IRL is undocumented. However, they tend to be concentrated around rock jetties and other hard structures near inlets (Ruppert & Fox 1988; LH Sweat, personal observation).

Size: A. punctulata reaches a total diameter, including spines, of about 100 mm. The test alone reaches a diameter of about 50 mm (Hendler et al. 1995).

The sex ratio of A. punctulata has been reported to be 1.03 males to every female (Shapiro 1935). Detailed abundance data remain unreported for the IRL, but both solitary individuals and aggregated urchins can be found in the lagoon.

Shapiro (1935) reported an incidence of hermaphrodism in 1 of every 2,350 A. punctulata. The reproductive season of this urchin is long in the warm waters of Florida, but discrete spawns are more evident in spring and summer near the northern part of its range (Harvey 1956, Serafy 1979). A. pulchella is a popular species for biological research, especially embryological and larval studies.

Movement & Behavior: Locomotion in A. punctulata is achieved primarily via the spines, and not the tube feet (Agassiz 1873). When a shadow is cast on the urchin, as might occur in the case of an approaching predator, the protective spines are pointed in the direction of the object (Ruppert & Fox 1988).

Associated Species: Commensal relationships have been described between A. pulchella and up to 145 other species, especially copepods (Bell & McClintock 1982).

Agassiz A. 1873. Revision of the Echini. Illustrated Catalogue of the Museum of Comparative Zoology at Harvard College. University Press. Cambridge, MA.

Renaud PE, Hay ME & TM Schmitt. 1990. Interactions of plant stress and herbivory: Intraspecific variation in the susceptibility of a palatable versus an unpalatable seaweed to sea urchin grazing. Oecologia (Berlin) 82: 217-226. 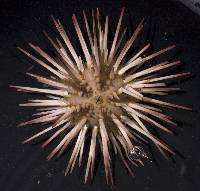 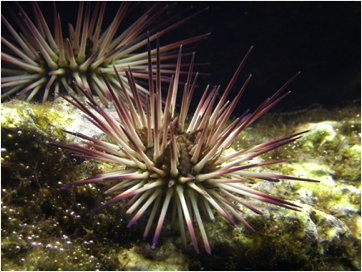