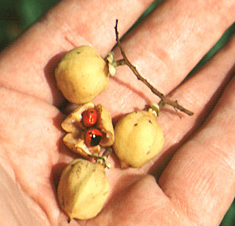 Species Description: Carrotwood, Cupaniopsis anacardioides, is an evergreen tree native to Australia, Indonesia, and New Guinea. It is a slender tree, usually with a single trunk that has dark gray outer bark covering inner bark that is often orange in color. It is this unusual feature that gives C. anacardioides its common name. The compound leaves are comprised of 4-12 leathery, shiny, yellowish green leaflets with the last two leaflets of each forming a pair. Leaflets are up to 20 cm long and 7.5 cm wide, with smooth margins and rounded to slightly indented leaf tips. Small white to greenish yellow flowers in branched clusters occur at leaf axils. The fruits are defining diagnostic features, consisting of short-stalked, three-segmented woody capsules up to 0.9 inches across that are yellow-orange when ripen and then dry to brown before splitting open to reveal three black seeds each covered by a yellow-red crust (Oliver 1992, Langeland and Burks 1998).

Regional Occurrence: Within its native range, Cupaniopsis anacardioides is found along rocky beaches and in sand dunes, and in hilly scrub and forested wetlands (Reynolds 1985). Carrotwood has escaped cultivation to become established in Florida. It is also grown as an ornamental plant in California, but there is no indication that it is a pest plant there.

IRL Distribution: Carrotwood can be found in all six IRL watershed counties and is considered to be naturalized from at least Brevard County southward. Brevard and Martin counties were the first on the east coast to contain reproductive populations (Langeland and Burks 1998, FLEPPC EDD Maps).

Age, Size, Lifespan: This fast-growing tree can reach a height of 10 m (Langeland and Burks 1998).

Reproduction: Carrotwood is monoecious, with both male and female flowers occurring on the same plant (Lockhart 2006). Sexual reproduction and propagation by means of seeds is the chief means of reproduction in Cupaniopsis anacardioides, a species that is recognized as a prolific seed producer (Lockhart et al. 1999). In Florida, carrotwood flowers from January to March and its fruit ripens in May and June. Bees are likely to be the main pollinators of carrotwood in Florida, as they are within the plant's native range (Hawkeswood 1983, ISSG).

Embryology: When the fruits ripen, they split open to release seeds to the environment. Seed dispersal by birds and small mammals is important, and transport via water may be important as well. The germination rate of carrotwood reportedly remains unknown (Lockhart et al. 1999).

Temperature: Temperature is likely the key factor limiting the spread of Cupaniopsis anacardioides into north Florida. A temperature of -6°C has been published as a lethal lower limit for the species, although test specimens maintained in north Florida have survived winter temperatures as low or lower than this value (Lockhart 2006).

Salinity: Carrotwood is tolerant of saline soil conditions as evidenced by its tendency to invade mangrove marshes and other coastal shoreline habitats.

Hydrology: Carrotwood is tolerant of a wide range of soil moisture conditions and thrives in disturbed and undisturbed wetlands but can readily adapt to dry areas as well (Lockhart et al. 1999).

Invasion History: Cupaniopsis anacardioides was intentionally introduced to south Florida in the 1950s and 1960s as a landscape ornamental plant (Lockhart et al. 1997. 2006). The freely-seeding plant quickly escaped from cultivation such that established seedlings were present in a variety of natural and disturbed habitats on both coasts by 1990 (Menninger 1964, Oliver 1992, Langeland and Burks 1998).

As of 1997, carrotwood was found in 14 coastal Florida counties and reproducing populations were established in Brevard, Martin, and Sarasota counties and possibly elsewhere (Lockhart et al. 1997, Langeland and Burks 1998).

Once it invades a new area, Cupaniopsis anacardioides can crowd out and outcompete native vegetation to form dense monospecific stands (Randall and Marinelli 1996).

Possible Economic Consequences of Invasion: Cupaniopsis anacardioides can alter the community structure of native plant communities, e.g., mangrove marsh, and negative economic as well as ecological impacts are probable. To minimize impacts, the plant was added to the DACS Florida Noxious Weed List (5b-57.007 FAC) in 1999. Plants on the Florida Noxious Weed List, including carrotweed, may not be introduced, possessed, moved, or released without a permit (Langeland 2006). 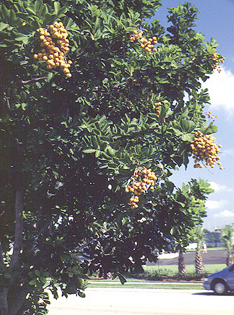