Species Description: The Cuban treefrog Osteopilus septentrionalis is a very large (up to 140 mm in Florida) treefrog that is not indigenous to the United States. It is variable in color, ranging from gray to green to brown, and individuals are capable of changing color. Cuban treefrogs also have very warty skin, a mottled color pattern, and very enlarged toe discs. The front toes are not webbed and the rear toes are only slightly webbed. (Ashton and Ashton 1988).

Internal examination reveals that the skin on top of the head of adult is fused with the bones of the skull, which is a trait not shared by native species.

O. septentrionalis tadpoles are black above and lighter below, with a wide-finned tail flecked with dark spots (Ashton and Ashton 1988).

Potentially Misidentified Species: The enlarged climbing toe disks aid in identifying Osteopilus septentrionalis as a member of the treefrog (Hylidae) family. In Florida the large size and general appearance also allow O. septentrionalis to be distinguished from co-occurring treefrogs. The largest native treefrog, the barking treefrog (Hyla gratiosa) is less than 75mm in length, and the statewide common green treefrog (H. cinerea) only grows to around 60mm (NSiS).

Regional Occurrence: The native range of O. septentrionalis includes Cuba, the Isla de Pinos, the Bahamas, and the Cayman Islands (Duellman and Crombie 1970).

Cuban treefrogs now occur throughout peninsular Florida, with breeding populations found as far north as Jacksonville on the east coast and as far north as Cedar Key on the Gulf Coast. Individuals (but not breeding pairs) have been reported from the Florida panhandle and also from coastal Georgia and South Carolina (Johnson 2007). A population introduced to Hawaii has reportedly been extirpated (Banks et al. 2004).

IRL Distribution: Osteopilus septentrionalis is established in all six counties of the IRL watershed.

Age, Size, Lifespan: Osteopilus septentrionalis is the largest treefrog in Florida, with males typically growing to 90 mm in body length and females usually reaching 125 mm and possibly as much as 140 mm (Behler 1979, Ashton and Ashton 1988, Carmichael and Williams 1991, Conant and Collins 1991).

Cuban treefrogs are long-lived, with a lifespan of approximately 5-10 years (Mattison 1987).

Abundance: Osteopilus septentrionalis is abundant throughout its introduced Florida range, particularly in coastal counties and in the southern half of the state.

There is concern among Florida wildlife managers that the population will expand to the point where it will represent a serious ecological issue, and researchers are investigating a specific chemical deterrent as a future management tool (Johnson 2007).

Reproduction: The breeding season in Florida coincides with the wet season, persisting from May through October (Behler 1979). Beginning around March and lasting through the breeding season, the distinctive grating/scraping mating croak of calling males is commonly detected (Duellman and Schwartz 1958, GSMFC).

Males mature at around 40 mm length and the much larger females mature at 50 mm or larger. Mating occurs in ponds and along lake margins, in drainage ditches and other ephemeral water bodies, and in pools, cisterns, and other manmade structures. During mating, females will lay an egg mass that is externally fertilized by males. The fertilized egg mass floats in a sheet at the water's surface until hatching (Behler 1979, Ashton and Ashton 1988). The size of the egg mass varies based on the size of the female; numbers ranging from 130 to 3,000 eggs have been reported. Large females can produce more than 15,000 eggs during the course of a breeding season (Johnson 2007).

Embryology: The eggs are around 3 mm when they hatch into tadpoles one to two days after fertilization (Duellman and Schwartz 1958). At 20 hours post-hatching, tadpoles are around 2 mm from snout to vent with a tail length of about 4 mm. They reach a size of 26-32 mm at metamorphosis, occurring usually 30-60 days after hatching.

Temperature: Cuban treefrogs are reportedly limited to geographical areas where daytime temperatures typically range between 23-29°C and where temperatures usually remain above 10°C. Hiwever, the persistence of breeding populations in north Florida where seasonal freeze events occur indicate that these temperature limits are not absolute (Johnson 2007). Similar to other treefrogs, Osteopilus septentrionalis prefers areas of high humidity.

Salinity: While no amphibian has entirely successfully invaded the marine environment, Osteopilus septentrionalis is capable of reproducing in water of relatively high salinity, for example, in brackish or salt-maintained swimming pools (Ashton and Ashton 1988).

Trophic Mode: Cuban treefrogs are recognized as voracious predators that readily consume any prey items that are small enough to catch and eat. Insects and insect larvae, spiders, other invertebrates, lizards, and other frogs make up much of the diet (Carmichael and Williams 1991, Conant and Collins 1991).

Osteopilus septentrionalis is an ambush predator often observed near lights waiting to feed on insects attracted by the illumination (Johnson 2007).

Associated Species: Cuban treefrogs in Florida are important prey items in the diets of a number of aquatic and terrestrial snakes (Carmichael and Williams, 1991).

Invasion History: The first reports of the Cuban treefrog occurring in the United States date to 1931 from Key West, although the species likely existed there well before it was reported. Introduction was likely accidental, e.g., as undetected stowaways in import vegetables from Cuba (Behler 1979). By the early 1950s, Osteopilus septentrionalis was present in most of the Keys, and by 1952 specimens were turning up in mainland Florida (Miami) as well (Schwartz 1952). Northward range expansion continued such that the species was confirmed present in Broward County by 1960, and in St. Lucie and Indian River counties less than 20 years later (King 1960, Myers 1977). Range expansion continued on the Gulf coast of Florida such that the species was confirmed in Naples by 1970 and in Fort Meyers and Sanibel Island by the early 1980s (Duellman and Crombie 1970, Wilson and Porras 1983). The species is now established on the east coast of Florida as far north as Jacksonville.

Unintended introduction of O. septentrionalis to new locations in the state is no doubt still facilitated through the unintentional transportation of individuals hidden in shipping crates or on potted plants and shrubs transplanted into new locations (Behler 1979).

Potential to Compete With Natives: Cuban treefrogs will eat smaller native frogs, preying on them as they attempt to utilize the same breeding sites (Allen and Neill 1953, Carmichael and Williams 1991). The larger size of the Cuban treefrogs likely also gives them an advantage in traditional competitive interactions with native species.

Possible Economic Consequences of Invasion: Large-scale economic effects of exotic Cuban treefrogs in Florida have yet to be reported, although the species can be a nuisance animal, e.g., entering homes and getting into and possibly disrupting the function of outdoor electrical boxes (Johnson 2007). The skin secretions of this frog can be irritating, especially to highly sensitive people (Carmichael and Williams 1991). 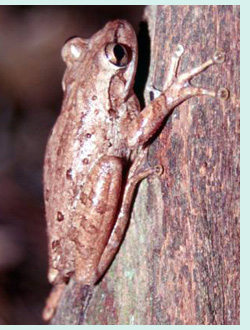