Potentially Misidentified Species: The similar looking congener Ligia oceanica, a possible European introduction, may be encountered from Rhode Island to Maine on the Atlantic coast of the United States. On the Pacific American coast another congener, L. occidentalis, occurs from Central California south to Central America. While yet another Ligia species, L. baudiniana occurs from South Florida to Brazil, Bermuda, and the Caribbean. In the IRL region of Florida, L. exotica is unlikely to be confused with any other species (Van Name 1936, Rupert et al. 2004).

Regional Occurrence: On the Atlantic coast of the US, the nonindiginous species L. exotica has been reported from New Jersey south through Florida. The species also occurs in coastal Texas and, as of 1996, has been recorded from Hawaii as well (Eldredge and Smith 2001).

IRL Distribution: Sizable numbers of L. exotica are commonly observed scurrying across the surfaces of rocks and pilings above the water line in harbors and on jetties throughout the IRL region.

Age, Size, Lifespan: The NEMESIS database indicates that adults are typically in the 2-3 cm size range but that adult males can grow to nearly 4 cm. NEMESIS indicates that although the lifespan of this species is not definitively known, the typical lifespan averaged among several congeners is approximately 2 years.

Abundance: L. exotica is commonly encountered in sizable numbers in intertidal/supratidal habitats where they resiide. Annectdotal information from local marine ecology and invertebrate zoology instructors indicates that 50 or more individuals can easily be collected at sampling sites they frequented.

Reproduction: Lopes et al. (2006) report the reproductive season of L exotica at two localities in Brazil to extend from approximately September or October to approximately May or June. These authors note that over a breeding season clutches from Ligia populations in Brazil contained between 25 and 142 eggs/embryos, with a mean ranging from around 73 to 88 eggs/embryos.

Females can reproduce multiple times a year and they exhibit a trait called ovigery, which means they carry their fertilized eggs outside their body, holding onto them with specialized egg-bearing appendages (Chesapeake Bay Introduced Species Database).

Embryology: Fox (2006) indicates that direct development within eggs is typical, but that some members of the genus Ligia may also hatch out as free-swimming larvae. Juveniles molt through a series of instar stages until they become mature.

Dissolved oxygen: Although L. exotica is considered a supralittoral coastal organism, this represents only a partial reinvasion of the marine environment by a species belonging to the same terrestrial isopod suborder (Oniscoidea) as pillbugs and wood lice (Rupert et al. 2004).

Trophic Mode: Some authors (e.g., Schultz 1977) describe L. exotica as an herbovore primarily grazing on algal crusts and diatoms growing on hard substrates of the high intertidal. Eldredge and Smith (2001) consider it to be a scavenger, feeding mostly on detritus and plant debris.

Invasion History: Ligia exotica is a good example of a cryptogenic species, i.e., a widely distributed species whose original native range is in dispute or not entirely known.

Although some sources (e.g., Eldredge and Smith 2001) cite the native range of L. exotica as encompassing the northeastern Atlantic and Mediterranean, other sources cast doubt on this assertion. The initial description of the species by Roux in 1828 was based on organisms collected from Marseilles on the French Mediterranean coast. The species name ('exotica') given by Roux, suggests it was not then considered to be native to the region (Roman 1977, NEMESIS).

Ligia exotica has been widely and unintentionally spread through shipping probably since the days of the first wooden sailing vessels. L. exotica could have survived transport via early wooden sailing vessels both within damp cargo and dry ballast, and also in moist cracks and crevices occurring above the waterline (Lippson and Lippson 1984, Schultz 1977).

The complete original native range is not known with certainty, but the species is likely to be native to the Pacific from Japan and China south to Madagascar and South Africa in the Indian Ocean. L. exotica is also found on the West African coast and in the Azores, likely a consequence of introduction (Roman 1977, NEMESIS).

In the United States collected specimens date back to 1880 from North Carolina, and to the same decade from Florida (Key West, Cedar Key), Brazil, and Uruguay (Van Name 1936). The widespread occurrence of this non-native invertebrate suggests early and, most likely, repeated accidental introduction. In subsequent decades throughout the first half of the 20th century, L. exotica was reported from Texas and Mississippi along the Gulf of Mexico, throughout much of coastal Florida, and up the east coast of the United States to New Jersey.

Potential to Compete With Natives: Ligia exotica is often a numerically dominant high intertidal/supratidal invertebrate, but competitive impacts on co-occurring natives remain largely unstudied. Where L. exotica occurs in abundance some effects of grazing on communal dietary resources may be assumed. There is no indication as to whether or not this leads to dietary resource limitation for other community members, however.

Possible Economic Consequences of Invasion: Despite widespread introduction of Ligia exotica, no detailed economic studies have been conducted. This may be due to the difficulty in assessing a meaningful baseline condition in areas where the species has occurred for several decades. L. exotica is considered to be naturalized throughout much of its introduced range. NEMISIS suggests that, aesthetics aside, the ecological and economic impacts of non-native L. exotica are unlikely to be significant. Likewise, the ecological/economic importance of this non-native organism as either a resource consumer (i.e., through grazing) or as a prey item (e.g., for shorebirds) remain unreported.

Kensley B. and M. Schotte. 1989. Guide to the marine isopod crustaceans of the Caribbean. Smithsonian Institution Press, Washington, D.C. 336 p.

Schultz G.A. 1974. Terrestrial isopod crustaceans (Oniscoidea) mainly from the West Indies and adjacent regions. I. Tylos and Ligia., Studies on the Fauna of Curaao and Other Caribbean Islands 45: 162-173. 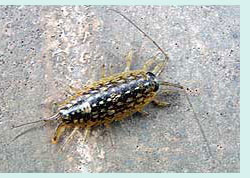