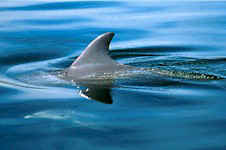 Species Description: The scientific order Cetacea includes three sub-orders: the Mysticeti, or baleen whales; the Odontoceti, or toothed whales; and the Archaeoceti, the now-extinct ancestral forms of some modern whales and dolphins. Tursiops truncatus, the bottlenose dolphin, is a toothed whale of the Family Delphinidae, which includes approximately 30 species of dolphins, pilot whales, killer whales and false killer whales.

The body color of Tursiops truncatus on the dorsal surface ranges from gray to gray-green or dark gray, fading to white on the ventral surface. Older individuals sometimes show an inconspicuous spotting pattern along the ventral surface and sides. Body form is fusiform and streamlined.

One species of bottlenose dolphin is recognized; however, biochemical evidence suggests that at least two distinct ecotypes exist. These ecotypes can be differentiated from differences in blood chemistry, skull measurement and body size. In general, the coastal ecotype has a somewhat smaller body and larger flippers than the offshore ecotype. It is suggested that the larger flippers increase maneuverability and heat exchange in the harbors, bays and lagoons frequented by these dolphins. The offshore ecotype appears to be better adapted for deep diving, and for colder, deeper waters. Its larger body aids in heat conservation, and is a defense against attack from potential predators (Hersh and Duffield 1990).

Regional Occurrence: Tursiops truncatus is a cosmopolitan species found in both tropical and temperate waters of the world's oceans (Wells and Scott 1999). In the Atlantic Ocean, bottlenose dolphins range from Nova Scotia to Patagonia, and from Norway to South Africa. In the Pacific, they are found from Japan to Australia, the Hawaiian Islands, and from southern California to Chile.

IRL Distribution: Tursiops truncatus is found throughout the Indian River Lagoon, with a resident population estimated to be between 200 and 800 individuals. This population may at times be augmented by normally coastal individuals which utilize the lagoon at certain times during the year, or even more sporadically.

A five-year study is currently being undertaken by the Harbor Branch Dolphin Research and Conservation Program in which a photographic catalog of Indian River Lagoon dolphins will be compiled. Future research will attempt to understand issues such as population size and structure, movement patterns, home range boundaries, social interactions and individual life histories of Indian River Lagoon dolphins.

Abundance: The worldwide population of Tursiops truncatus is not known. However, population sizes have been measured in some areas. The U.S. population has been estimated at approximately 79,000 individuals, of which 12,000 inhabit the waters of the western North Atlantic ocean, and 67,000 inhabit the Gulf of Mexico and Florida areas.

Locomotion: Swimming speed and duration in the bottlenose dolphin are inversely proportional; high speed bursts of swimming may last for only seconds, while low speed swimming may last for extended periods of time. Swimming speeds in the bottlenose dolphin average approximately 5-11 kph (3-7 mph). Burst speeds have been measured at 29-35 kph (18-22 mph).

Dolphins do not generally need to make deep dives in order to capture prey. However, they are capable of diving deeply for up to 10 minutes at a time. The maximum depth of a trained dive performed by a dolphin was 547 m (1,795 ft) (Ridgeway 1990).

Bottlenose dolphins may breed throughout the year, however breeding peaks have been observed. These peaks vary with geographic location, but generally coincide with the calving season. In Florida, the calving season peaks in May; however, among Indian River Lagoon dolphins there is a bimodal peak, with most births occurring in April and August.

Temperature: The fusiform body shape of this species and its reduced limb size act to decrease the amount of exposed surface area, thus conserving heat. A thick layer of blubber underlies the skin and acts as both an insulation layer and an energy reserve. The blubber layer generally accounts for 18-20% of a dolphin's body weight.

As with all whales, bottlenose dolphins utilize a countercurrent heat exchange system to regulate internal body temperature. The circulatory system is designed to conserve heat in cold temperatures and to dissipate heat in warmer temperatures. Arteries in the flippers, flukes and dorsal fin are surrounded by veins. In cold temperatures, heat from blood warmed in the core of the animal is transferred to venous blood rather than to the external environment, thus conserving body heat. Another mechanism used to conserve body heat occurs during deep diving, when blood from the extremities and body surface is shunted to tissues underlying the blubber layer.

In warm temperatures, dolphins sometimes need to dissipate excess body heat generated by burst swimming or other strenuous activities. In these cases, blood flow to the veins of the extremities is increased, while circulation to the veins of the body core is decreased. In this manner, excess heat is released from the body to the external environment.

Trophic Mode: The diet of Tursiops truncatus is primarily composed of fish, however squid and shrimp are also taken. Over 45 fish species are utilized as prey by bottlenose dolphins, with sciaenid fish (croakers) being most abundant in the diets of Indian River Lagoon dolphins. As most prey species do not school and are associated closely with seagrasses, it has been proposed that bottlenose dolphins may locate prey by passive listening.

A single dolphin may eat 4 - 5% of its body weight daily, with nursing mothers consuming approximately 8% of their body weights daily. Feeding behaviors are highly flexible and adapted to particular habitats and food resources. Dolphins feed by swallowing prey species whole, or by breaking larger prey items into more manageable sizes by shaking or scraping them.

Dolphins are often cooperative hunters in open waters. Pods may surround large schools of fish, herding them into tight masses and often stunning them by use of the tail flukes. When the school is dense enough, the dolphins take turns swimming through the school to feed. Dolphins also have been observed to herd schools of fishes against shorelines in order to trap them in shallow water where they may be easily fed upon.

Bottlenose dolphins have also been known to feed in association with commercial fishing operations, feeding on the incidental catch of shrimp trawls.

Competitors: It is as yet unclear whether bottlenose dolphins face competition from other apex predators in the Indian River Lagoon. Possible candidates for competitors include the bull shark (Carcarhinus leucas) and the American alligator (Alligator mississippiensis) which, along with the dolphin, have been implicated in damage caused to fishing gear in the Indian River Lagoon. It must be stressed, however, that there is no clear evidence that the diets of these species overlap. Large sharks such as tiger sharks, dusky sharks and bull sharks are predators of bottlenose dolphins. Dolphins respond to the presence of these animals with tolerance, avoidance and aggression. Tiger sharks have been observed to elicit the strongest responses in dolphins, and they have been observed attacking and killing tiger sharks in the wild. The American alligator has also been observed to prey upon stranded dolphins; however, attacks by alligators are a rare occurrence.

Activity Time: Field observations of wild dolphins indicate that daily activity cycles occur, with dolphins being active to some degree in both day and night. A major portion of a dolphin's daily activities center around social behaviors and interactions. Dolphins in a pod, or social group, establish strong bonds. Studies have suggested that individual dolphins often show preferences for some individuals within the group over others, and are able to recognize each other even after long separations. Bonds between adult male pairs are strong and may last for long periods of time, with males showing cooperation in many activities. Mother-calf bonds are also long lasting, and calves may remain with their mothers for 3 - 6 years or longer.

Associated Species: Tursiops truncatus and the West Indian manatee are the only marine mammals that inhabit the Indian River Lagoon. However, given that manatees are herbivorous and dolphins are carnivorous, it is unsurprising that they are not necessarily found in association with one another.

Bottlenose dolphins outside the Indian River Lagoon have been observed in groups of pilot whales, spinner dolphins, and spotted dolphins. They have also been observed riding the pressure waves of large whales such as humpback, gray, and right whales.

Notes on Special Status: All whales and dolphins in U.S. waters fall under the jurisdiction of the National Marine Fisheries Service (NMFS) and are protected under the Marine Mammal Protection Act of 1972. This act made it illegal to harass or hunt any marine mammal in U.S. waters, but allows certain exceptions including native subsistence hunting, and taking dolphins and whales as incidental catch in commercial fishing.

Cost in IRL: Six of the ten most important fish species to the bottlenose dolphin are also commercially important in the Indian River Lagoon. These include the spotted sea trout, striped mullet, Atlantic croaker, spot, weakfish and kingfish. Barros and Odell (1993), using a hypothetical population of 400 resident dolphins in the Indian River Lagoon, estimated the total annual consumption by dolphins of these prey species to be 598 metric tons per year. This total was compared to the 1990 total annual catch of 1,113 metric tons by the commercial fishery within the lagoon. Given the different market values of the fish species taken, the estimated impact on the fishery by dolphins was similar to the landings by commercial fisheries, and was estimated to be over 1.1 million dollars per year. 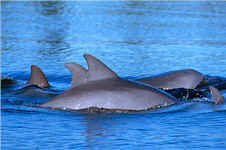