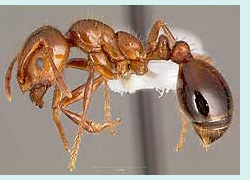 Species Description: Macroscopic identification of the mounds of red imported fire ants (RIFA, Solenopsis invicta) is typically made by lay residents of Florida while in the midst of a hasty retreat once the mounds are accidentally disturbed and large numbers of irritated stinging red ants emerge to attack the source of the disturbance.

S. invicta soil mounds tend to be 46 cm or less in diameter (Cohen 1992). Red fire ant stings usually result in the formation of a white pustule within 24 hours.

Positive identification of individual RIFA is aided by confirmation of a red to brown body color, a two-segmented body pedicel ("waist"), a four-toothed mandible, a sting at the tip of the gaster (terminal abdominal segment), and 10-segmented antennae ending in two-segmented clubs (Hedges 1997).

There are more than 280 species of Solenopsis worldwide.

Regional Occurrence: S. invicta is a southern South American species native to Brazil. It was likely introduced to the United States in the 1920s and 1930s and to parts of Australia in the 1970s. The species has also become established in New Zealand, Puerto Rico, and the Virgin Islands. S. invicta now infests more than 320 million acres in 12 states in the southeastern U.S. and Puerto Rico. The species has also recently been reported from California and New Mexico (Holway et al. 2002, ARS 2003).

IRL Distribution: S. invicta occurs throughout the entire state of Florida, including all six counties within the IRL watershed.

Abundance: Vinson & Sorenson (1986) report that a mature S. invicta colony can have nearly one-quarter million workers, while typical colonies have about a third as many. These authors also estimate that in the southern U.S. where S. invicta occurs, nearly 100,000 new queens per year can be produced in every acre of infested land.

Reproduction: Winged reproductive males called alates are produced once a colony is a year old. As many as 4,500 alates join winged reproductive female alates (the new queens) to take part in a mating flight during which the females are fertilized in the air. The males die shortly thereafter and the fertilized females establish new colonies. From six and eight mating flights in the spring and fall months are typical for mature colonies (Vinson and Sorenson 1986, Collins and Scheffrahn, 2005).

Newly mated queens will often cluster together in sheltered areas after mating and may cooperate to establish a new colony. Vinson and Sorenson (1986) indicate that multiple-queen S. invicta colonies do occur in some cases, while in other cases all but one queen will die off as the colony matures (Collins and Scheffrahn, 2005).

Embryology: After mating, a female alate will lose its wings and locate a suitable spot for a new colony. After burrowing into the soil and sealing herself into a self-excavated chamber, the young queen will lay an initial clutch of usually 10-15 eggs. These will hatch into the first cohort of sterile female workers in 8-10 days, during which time the queen will have produced on the order of 100 more eggs (Holldobler and Wilson 1990, Collins and Scheffrahn 2005).

As with most insects, S. invicta early life history includes both a larval and a pupal stage. Larvae are the immature, wormlike first feeding forms that emerge from the eggs and pupae are subsequent quiescent stage prior to metamorphosis. In S. invicta each of these stages persists for approximately 1-2 weeks, and the initial cohort of worker ants becomes mature 2-4 weeks after hatching. Until this first clutch grows to maturity, the young queen will refrain from laying more eggs. The queen provides nutrition to the first batch of developing young in a number of ways, including the production of non-developmental trophic eggs, regurgitation of energy-rich oil, salivary secretions, and via breakdown of the now-unneeded wing muscles. All of these sources of nutrition are used to provide nutrients to larvae and pupae of this initial clutch (Vinson & Sorenson 1986, Collins and Scheffrahn 2005). Because the young queen can provide only limited nutrition these initial workers are notably smaller when they emerge than are successive cohorts. On emerging, however, this group of workers sets to work foraging for food for the queen and the next generation of larvae.

Temperature: Low temperatures appear to be key to limiting northward expansion of the range of Solenopsis invicta in the United States. Ecological models predict that the species will fail to become established in regions where the soil persists at near-freezing temperatures for more than a couple of weeks (ARS 2003).

Trophic Mode: Solenopsis invicta is a predatory ant species whose diet consists primarily of small invertebrates such as insects and spiders, centipedes and millipedes, earthworms, and other similarly sized prey. S. invicta also regularly consumes carrion and are attracted to sugary substances. Food is collected by foraging worker ants who use pheromone trails to direct one another to food sources once they have been located (USDA 1993).

In the absence of their natural predators, competitors and parasites to keep the species in check, RIFA have become five times as abundant in North America as they are in South America. Since the initial introduction of the species, Solenopsis invicta has expanded its range to include a significant portion of the southeastern United States.

Potential to Compete with Natives: Fire ants are capable of causing dramatic reductions in the numbers of native ant populations and a variety of ground-nesting animals (ARS 2003). Allen et al. (1995) report negative impacts of S. invicta on populations of northern bobwhite (Colinus virginianus).

Possible Economic Consequences of Invasion: RIFA are responsible for extensive crop damage as well as damage to electrical and other equipment. The Agricultural Research Service has estimated the annual costs in terms of damage and population management control at more than $6.5 billion (ARS 2003).

S. invicta has been nominated by the Invasive Species Specialist Group (ISSG) as among "100 of the World's Worst" invasive alien species. 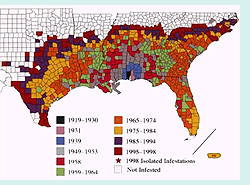 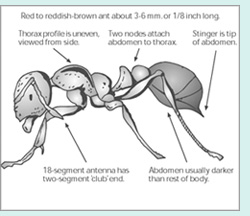