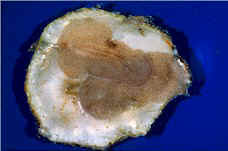 Species Description: Stylochus sp. are generally oval in shape, with greatly flattened bodies. Color is tan to darker brown. They are common inhabitants of oyster reefs and reach 2.5 - 3.2 cm (approximately 1 inch) in length.

IRL Distribution: Stylochus sp. is found throughout the Indian River Lagoon, and is most abundant in areas where oysters occur.

Notes on Endemism: The invasion status of Stylochus sp. is unknown but its larvae have been found in bilge water.

Economic Importance: Stylochus sp. can be considered to have an adverse economic impact in the Indian River Lagoon because it preys on oysters.