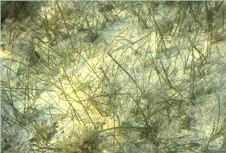 Regional Occurrence: Ruppia maritima is distributed worldwide, occurring in both temperate and subtropical estuaries, bays and lagoons (Eiseman 1980). Ruppia maritima occurs in brackish waters along the U.S. Atlantic coast as well as in alkaline lakes, ponds and streams in the western U.S. (Phillips 1960). R. maritima has also been reported from Newfoundland (Fernald and Wiegand 1914 as cited in Phillips 1960). Phillips (1960) reported the occurrence of Ruppia at several brackish water sites along the west coast of Florida. Thorne (1954) (as cited in Phillips 1960) reported Ruppia maritima occurring from Bay County, Florida to Aransas County, Texas. Phillips (1960) concludes that it is probable that Ruppia occurs from Newfoundland to Texas.

IRL Distribution: Ruppia maritima grows patchily throughout the Indian River Lagoon in very shallow water, often mixed with Halodule wrightii, and becomes less common in the south (Virnstein 1995). Eiseman (1980) described the occurrence of Ruppia maritima throughout the Indian River Lagoon as being sparse, mixed with Halodule beaudettei, and occurring just below the intertidal zone. Early reports of Ruppia occurring in the Indian River Lagoon, included several locations in Brevard County, including Sebastian Inlet, as well as from the St. Lucie River near St. Lucie Inlet (Woodburn and Ingle 1959).

Seven species of seagrass occur in the IRL, including all 6 species occurring throughout the tropical western hemisphere, as well as Halophila johnsonii, known only from coastal lagoons of eastern Florida:

Halodule wrightii is the most common.

Ruppia maritima is the least common and is found in the most shallow areas of the lagoon.

Thalassia testudinum occurs in the southern portion of the IRL (Sebastian Inlet and south).

Halophila decipiens, Halophila engelmannii and Halophila johnsonii can form mixed or monotypic beds with other species. Because of their abundance in deeper water and high productivity, the distribution and ecological significance of the 3 Halophila species may have previously been underestimated (Dawes et al 1995).

The northern area of the Indian River Lagoon supports the most developed seagrass beds, presumably because of relatively low levels of urbanization and fresh water inputs. Four species of seagrass - Halodule wrightii, Syringodium filiforme, Halophila engelmannii and Ruppia maritima - can be found north of Sebastian Inlet, while all 7 species occur to the south (Dawes et al 1995).

Depth: When occurring in a mixed seagrass flat, Ruppia maritima occurs in slightly deeper water, while Halodule wrightii occurs closest to shore. Thalassia testudinum, although probably preferring continuous submersion, is limited by neap tide low water mark, whereas Syringodium is limited by spring tide low water mark and is found in the deepest parts of the mixed flat (Phillips 1960).

Distributional Changes: Changes in seagrass distribution and diversity pattern in the Indian River Lagoon (1940 - 1992) are discussed by Fletcher and Fletcher (1995).

It was estimated that seagrass abundance is 11% less in 1992 than in the 1970s, and 16% less than in 1986 for the entire Indian River Lagoon complex (Ponce to Jupiter Inlet). Decreases in abundance occurred particularly north of Vero Beach. In this area of the lagoon, it was also estimated that maximum depth of seagrass distribution has decreased by as much as 50% from 1943 to 1992.

Alteration of such factors as water clarity, salinity and temperature could affect the diversity and balance of seagrasses in the Indian River Lagoon system and should be considered when developing management strategies for this resource (Fletcher & Fletcher 1995).

Reproduction: Seasonality of both growth and biomass is exhibited by all species of seagrass in the Indian River Lagoon, being maximum during April to May and June to July respectively.

Ruppia maritima is the only seagrass in the southeastern U. S. that exhibits hydroanemophilous pollination, i.e., hydrophobic pollen grains float on the water surface. This allows for either self-fertilization or outcross fertilization (Moffler & Durako 1987). Both sexual and vegetative reproduction can account for new plant production in Ruppia maritima.

Dense mats of flowering Ruppia plants, 2 & 1/2 to 3 feet long, with most plants bearing flowers, have been observed (Phillips 1960). Muenscher (1944 as cited in Phillips 1960) described the flowers of Ruppia maritima. Phillips (1960) reported no correlation between salinity and flowering in Ruppia, although he reported observing Ruppia before, during and after flowering at salinities above 31.4 ppt.

Temperatures averaging 22.0 - 24.0 °C induced both flowering and fruiting in Ruppia maritima. It was concluded that a temperature of 15.0 - 20.0 °C was required for germination and seed maturation, while a range of 20.0 - 25.0 °C was necessary for vegetative growth and reproduction. Ruppia seeds might remain dormant throughout the autumn and winter and germinate the following spring (Setchell 1924 as cited in Phillips 1960).

It appears that vegetative growth and sexual reproduction (flowering and fruiting) commence with warm water temperatures in the spring and end when high summer temperatures persist (Phillips 1960). Because R. maritima flowers so profusely, its geographical distribution is probably due to sexual reproductive activity (Phillips 1960, McMillan & Moseley 1967) with fruits/seeds being dispersed by currents. Seed dispersal could also be accomplished by migratory waterfowl that use Ruppia as a food source.

Vegetative growth as well as sexual reproductive activity probably serve to maintain and enlarge established beds of Ruppia. Growth of Ruppia maritima, Halodule wrightii, Halophila engelmannii, Syringodium filiforme and Thalassia testudinum was investigated at various light intensities in the laboratory. Optimum growth for all five species was obtained at light intensities of 200 - 450 foot-candles. At light intensities above or below this range, growth was much slower for all species (Koch et al 1974).

Flowering and reproduction of five seagrasses including Ruppia maritima was compared between clones placed in laboratory culture under controlled conditions of light, salinity and temperature, with those occurring in Redfish Bay, Texas. Ruppia could not be induced to produce flowers in the laboratory, although it flowered in Redfish Bay sporadically throughout the summer. In this study, Halophila engelmannii produced flowers continuously in the laboratory (January - September), as well as in the field (April - mid-June) implying that conditions inducing flowering in Halophila do not affect Ruppia in the same manner (McMillan 1976). Ruppia maritima occurs occasionally in the intertidal zone but probably does not flower there (Phillips 1960).

Temperature: Ruppia, a eurythermal species, has been reported from the tropics to temperate regions. Ruppia maritima var. oqliqua was found near Nova Scotia and Prince Edward Island (Fernald and Wiegand 1914 as cited in Phillips 1960). Ruppia was observed to overwinter in Tampa Bay, FL where temperatures ranged from 13.0 - 35.0 °C and survived extremes of 7.0 °C in February and 39.4 °C in July. Ruppia beds increase in abundance with warm water temperatures in the spring, and are most abundant during the flowering period. Temperatures of 20 - 25 °C are probably most favorable for growth and development of Ruppia (Phillips 1960).

Salinity: Ruppia maritima has been found in water ranging from fresh to 32 ppt salinity, but is generally found in waters of 25.0 ppt or less (Phillips 1960).

In vitro rhizome growth and rooting of Ruppia maritima occurred at various salinities using artificial seawater. Rhizome production was most rapid at 0 & 5 ppt as opposed to 10, 15 and 20 ppt salinity. In vitro root production, although requiring an external carbon source, was greatest at 5 and 10 ppt salinity. This study also showed that ex vitro plantings were very successful, suggesting that Ruppia maritima would be a good candidate for propagation through in vitro culture (Bird et al. 1993).

Trophic Mode: The protein, carbohydrate and trace element composition, energy content and nutritive value of Ruppia maritima and Thalassia testudinum were investigated. It was found that relative to other aquatic plants, Ruppia and Thalassia contain substantial amounts of protein, carbohydrate, energy and minerals, but that nutritional value of these plants can vary seasonally (Walsh & Grow 1973).

Habitat: In the Indian River Lagoon, Ruppia maritima has been reported from sand as well as muddy, course sand substrata. Along the Gulf coast, the predominant substratum where Ruppia maritima occurred, habitat was a mixture of mud and silt with fine textured sand. All seagrasses, including Ruppia, aid in binding sediment and thereby lessen the effects of erosion (Phillips 1960).

Ruppia maritima appears to prefer brackish water less than 25.0 ppt salinity. In Florida, Ruppia was found from the intertidal to a depth of 7 feet, with densest growth at 2 to 4 feet (mean high tide). Phillips (1960) speculated that the restriction of Ruppia to shallow water is a result of its tolerance to low salinity waters, usually occurring in turbid bays and estuaries. Light penetration is compromised in these turbid waters and hence will not support plant growth below certain depths.

Associated Species: For an extensive treatment of seagrass community components and structure, including associated flora and fauna, see Zieman (1982). The significance of seagrass beds as habitat, nursery and food source for ecologically and economically important fauna and flora as well as various management strategies for IRL seagrass beds are discussed by Dawes et al (1995).

Direct grazing on Florida seagrasses is limited to a number of species, e.g., sea turtles, parrotfish, surgeonfish, sea urchins and perhaps pinfish. Other grazers e.g., the queen conch, scrape the epiphytic algae on the seagrass leaves (Zieman 1982). At least 113 epiphytes, and up to 120 macroalgal species have been identified from Florida's seagrass blades and communities respectively (Dawes 1987).

Habitat Diversity: Virnstein (1995) suggested the "overlap vs. gap hypothesis" to explain the unexpectedly high (e.g., fish) or low (e.g., amphipods) diversity of certain taxa associated with seagrass beds. In a highly variable environment such as the Indian River Lagoon, diversity of a particular taxa is related to its dispersal capabilities. For example, amphipods, lacking a planktonic phase, have limited recruitment and dispersal capabilities, whereas highly mobile taxa such as fish (which also have a planktonic phase) would tend to have overlapping species ranges and hence higher diversity (Virnstein 1995).

Broad-scale Cost/Benefit: Virnstein (1995) stressed the importance of considering both geographic scale and pattern (landscape) in devising appropriate management strategies to maintain seagrass habitat diversity in the Indian River Lagoon. It was suggested that goals be established to maintain seagrass diversity and that these goals should consider not only the preservation of seagrass acreage but more importantly, the number of species of seagrass within an appropriate area. By maintaining seagrass habitat diversity, the maintenance of the diverse assemblage of amphipods, mollusks, isopods and fish, associated with seagrass beds, will be accomplished (Virnstein 1995). 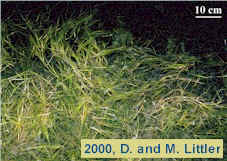