Species Description: Winston (1982) first described this new species from specimens collected in the Indian River Lagoon and along the coast. Like B. gracilis, a morphologically similar species, B. maxima colonies can be found on algae, seagrasses, hydroids, and on hard substrata such as rocks and shells. Color overall is a gray-white, with colonies developing into partially erect branches, clusters and masses of zooids. Zooids are arranged irregularly in clumps along stolons. Individual zooids are subcylindrical in shape, becoming more elongate when the polypide is expanded. Functional zooids average 1.14 X 0.30 mm. Degenerated zooids measure an average 0.575 X 0.25 mm. Orifice is round with expansion of the polypide, but square in shape when it is retracted. Polypides have large gizzards that measure approximately 0.119 X 0.139 mm in size. The lophophore is also large, measuring approximately 0.751 mm in diameter, and bears 8 tentacles that are strongly outcurved at the tips. Stolons measure 0.134 mm in width.

Etymology: This species was named from the Latin maximus (greatest).

Potentially Misidentified Species: B. maxima could be confused with B. gracilis due to overall morphological similarity. However, zooids of B. maxima are significantly larger than those of B. gracilis. In addition, living specimens of B. maxima have star-shaped, brilliantly pigmented white cells in the stolon and zooids, with white pigmentation extending into the lophophore and tentacles (Winston 1982).

Regional Occurrence: Winston first described B. maxima from the Indian River Lagoon, Florida in 1982. It has since been documented in Jamaica at both Discovery Bay and Port Royal. The distribution of this species is likely to be significantly more widespread. Winston (1982) suggested some of the variability in species descriptions for B. gracilis in other areas was perhaps due to the occurrence of both B. gracilis and B. maxima in samples.

IRL Distribution: Specimens of this new species were collected in abundance from the IRL in the Sebastian Inlet grass flats area, and coastally at Walton Rocks and Sebastian (Winston 1982, 1995).

Abundance: Winston (1995) lists B. maxima as one of the most abundant bryozoan species in the Indian River Lagoon.

Embryology: Bowerbankia species brood embryos in zooids until they develop into ovoid, ciliated, non-feeding larvae with a short planktonic life. The reproductive season of B. maxima is unknown.

Temperature: B. maxima is collected in March through September in the Indian River Lagoon. It has not been observed in the winter.

Salinity: B. maxima was typically collected from areas in the IRL where salinity was below 30‰, and is thus considered to be euryhaline (Winston 1995).

Habitats: Typical habitat for ectoprocts in the Indian River Lagoon include seagrasses, drift algae, oyster reef, dock, pilings, breakwaters, and man-made debris (Winston 1995). In the Indian River Lagoon, B. maxima was collected in association with seagrasses and algae, specifically the Rhodophyte Solieira spp., from March through November. Coastally, this species is found on shells, rocks, algae, hydroids, and other bryozoans. Colonies of this species form large masses that overgrow other organisms on beach rock ledges, or on breakwaters (Winston 1982).

Associated Species: Seagrasses as well as floating macroalgae, provide support for bryozoan colonies. In turn, bryozoans provide habitat for many species of juvenile fishes and their invertebrate prey such as polychaete worms, amphipods and copepods. (Winston 1995).

Bryozoans are also found in association with other species that act as support structures: mangrove roots, oyster beds, mussels, etc. 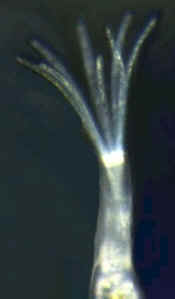 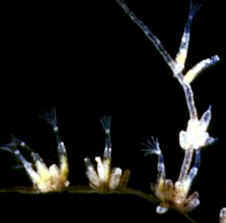