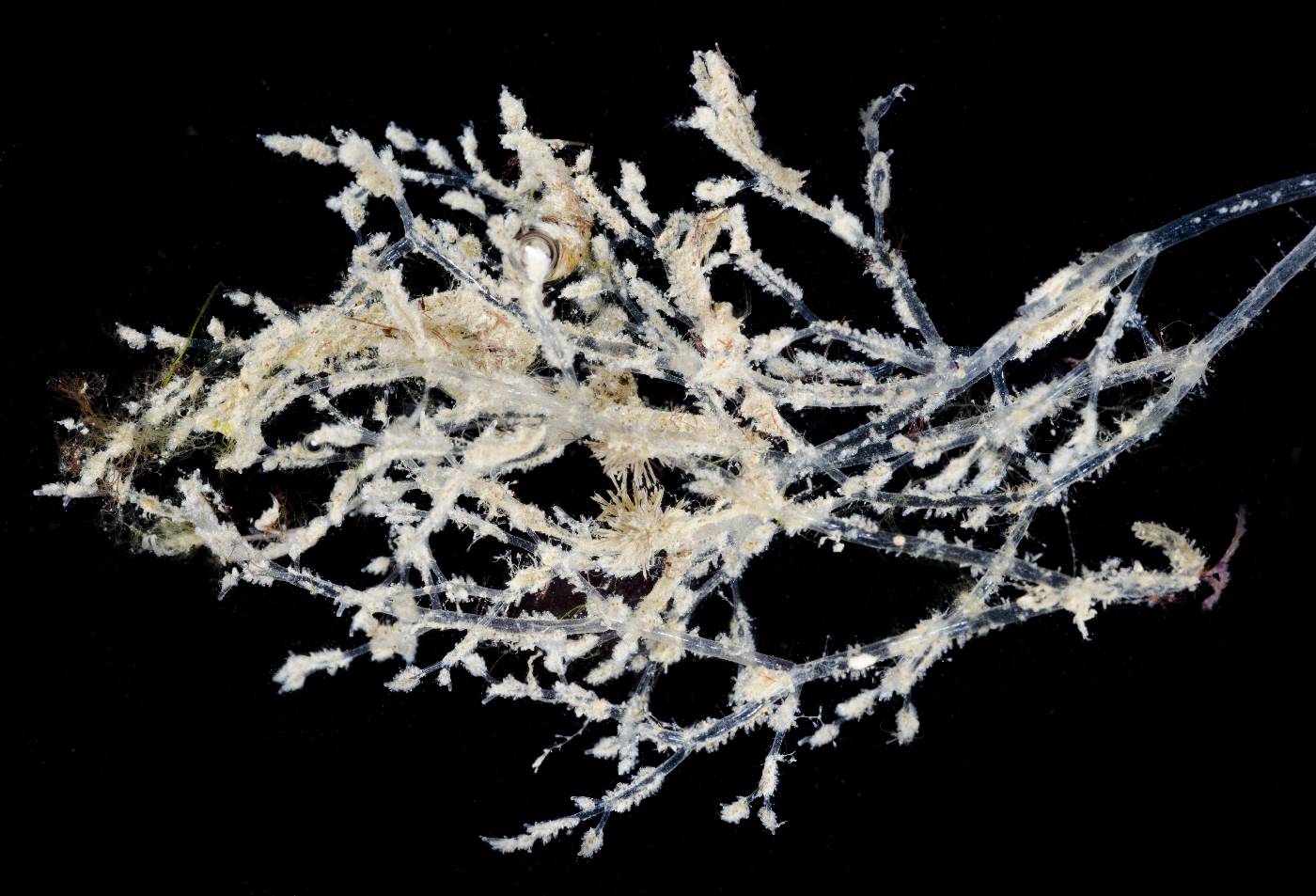 Species Description: Amathia verticillatum is a common bryozoan in the Indian River Lagoon (IRL), and may have the largest biomass of all IRL bryozoa. Its colonies are arborescent, with trifurcately branching stolons of approximately 0.5 mm in diameter. Zooids are sac-like and arranged along 2 sides in rows. Zooids measure approximately 0.4 - 0.6 mm in height. The lophophore has a diameter of approximately 0.320 mm, and bears 8 tentacles. A large gizzard is present. Young colonies have transparent stolons. Calcium carbonate is absent in exoskeletons of this species.

Regional Occurrence: A. verticillatum is widely distributed in warm temperate and tropical waters in the western Atlantic and the Caribbean.

IRL Distribution: A. verticillatum has the greatest biomass of any bryozoan species in the IRL, and develops large populations throughout the summer. It is possible that this species, due to its ability to filter particulates from large volumes of water, contributes to the overall health of the IRL ecosystem.

Age, Size, Lifespan: Colonies in the IRL can reach 1 meter or more in length within 6 - 8 months (Winston 1995). Stolons generally measure 0.5 mm in diameter, individual zooids measure 0.4 - 0.6 mm, and tentacles of individual zooids measure approximately 0.3 mm in diameter. In Florida, colonies grow well from April through late September. They die back with the onset of decreasing water temperatures in fall, but enough fragments overwinter that new growth begins in spring.

Abundance: Seasonality in the IRL plays a major role in the abundance of any bryozoan species. Typically, bryozoans are most abundant from October to May. Amathia verticillatum is highly abundant, and has the greatest biomass of any bryozoan in the IRL.

Embryology: A. verticillatum is a member of the Order Ctenostomata that broods its embryos.

Salinity: A. verticillatum is considered to be euryhaline. However, it is typically found in its greatest abundance where salinity is above 30‰.

Trophic Mode: A. verticillatum, like all bryozoans, is a suspension feeder. Each individual zooid in a colony has 8 ciliated tentacles that are extended to filter phytoplankton less than 0.045 mm in size (about 1/1800 of an inch) from the water column. Bullivant (1967; 1968) showed that the average individual zooid in a colony can clear 8.8 ml of water per day. This figure, multiplied by an approximate count of the number of individual zooids in 1 square meter (m²) of seagrass beds yields an average of 184,728 liters (48,613 gallons) of water filtered per day.

Competitors: It is highly unlikely that many organisms feed directly on A. verticillatum as colonies produce bromo-alkaloids, a class of chemical compounds related to drugs like nicotine, morphine, and cocaine (Sato and Fenical 1983). These secondary metabolites are likely to protect zooids in the colony by discouraging predation, preventing settlement of other organisms, and preventing bacteria or viruses from invading. Only a few species of nudibranch mollusks are known to feed directly on A. verticillatum.

Associated Species: Seagrasses as well as floating macroalgae, provide support for bryozoan colonies. In turn, bryozoans provide habitat for many species of juvenile fishes and their invertebrate prey such as polychaete worms, amphipods and copepods. (Winston 1995). Bryozoans are also found in association with other species that act as support structures: mangrove roots, oyster beds, mussels, etc. 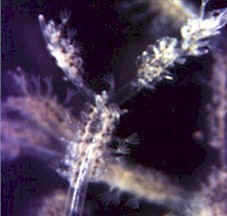 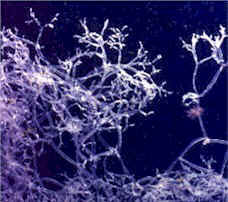