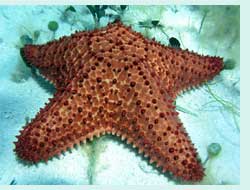 Species Description: Oreaster reticulatus is a member of the family Oreasteridae. It was once the most common seastar in the shallow waters of the Caribbean (Anderson 1978, Wulff 1995, Metaxas et al. 2002). The cushioned star is large with a central disc surrounded by five short, tapered arms. The thick body of O. reticulatus is covered by a hard shell with raised knobby spines. The color of adult cushioned stars can be brown, orange, red, or yellow. The juveniles are mottled green in color that affords them camouflage in their seagrass bed refuge (Scheibling 1980a).

Age, Size, Lifespan: The cushioned star reaches sexual maturity at approximate radius of 12 cm (Guzman and Guevara 2002). Individuals can grow up to 50 cm in diameter. The growth potential of an individual is thought to be limited by food availability, usually caused by intraspecific competition in large aggregations. During times of low food availability, O. reticulatus will reabsorb its body tissues to prevent starvation and as a result decrease in size (Scheibling 1980a).

Abundance: Adults occur in dense aggregations called 'fronts' of 200 to 4000 individuals (Guzman and Guevara 2002, Metaxas et al. 2002). The size of the fronts is dependent upon the available substratum and higher densities of the fronts are correlated with the annual reproductive cycle. Oreaster reticulatus can occur at densities of 14 individuals per m2 ensuring reproductive success (Scheibling 1980a and b, Guzman and Guevara 2002). There are mass migrations of the cushioned star to calmer offshore habitats in the winter months to avoid turbulence (Scheibling 1980a, Scheibling 1985).

Reproduction: Oreaster reticulatus have separate sexes and reproduce annually in summer in subtropical regions. In more tropical areas where water temperatures are high nine months out of the year, there is asynchronous spawning year round (Guzman and Guevara 2002).

Embryology: The planktonic larvae of the cushioned star are dispersed over long distances in water currents. Larvae will settle and metamorphose in seagrass beds. Recruitment to adult populations of Oreaster reticulatus from nursery grounds occurs when individuals enter the last juvenile stage, measuring 6-12 cm in length (Scheibling 1980a).

Salinity: There are no studies specifically addressing the salinity tolerance of Oreaster reticulates.

Trophic Mode: The cushioned star, a deposit feeder, has a complex digestive system that allows considerable variability in its feeding habits (Anderson 1978, Scheibling 1982). It is an omnivore, feeding on epiphytic microorganisms, echinoids, holothuroid juveniles and invertebrates including polychaetes, copepods, ostracods, crab larvae, and sponges (Wulff 1995, Guzman and Guevara 2002). Oreaster reticulatus uses its arms to rake piles of sediments and then everts its large cardiac stomach, enveloping the food in its folds. (Anderson 1978, Wulff 1995). O. reticulatus can turn over sediment 1.9 times within 24 hours (Scheibling 1980b).

Fishery: Fishery: The cushioned star has been overharvested for souvenirs and the aquarium trade and are no longer common in areas of high human populations (Metaxas et al. 2002, Guzman and Guevara 2002).

Anderson JM. 1978. Studies of the functional morphology in the digestive system of Oreaster reticulatus (L.) (Asteroidea). The Biological Bulletin 154:1-14.

Scheibling RE. 1982. Habitat untilization and bioturbation by Oreaster reticulatus (Asteroidea) and Meoma ventricosa (Echinoidea) in a subtidal sand patch. Bulletin of Marine Science 32:624-629.