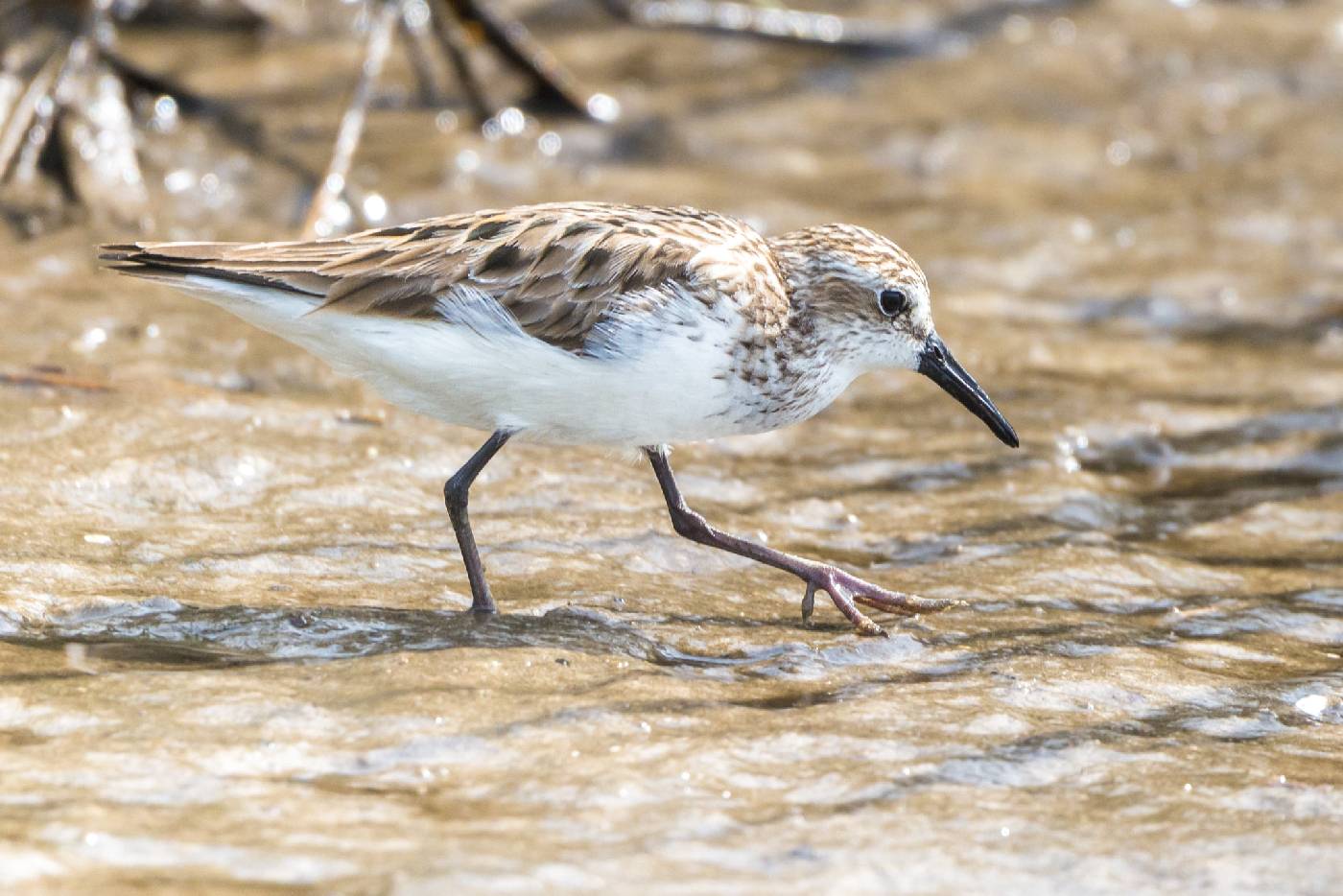 Species Description: The semipalmated sandpiper, Calidris pusilla, is a small bird named for the webbing present between its toes (Terres 1980). Despite its somewhat nondescript coloration, the species is used as a standard for identification of sandpipers. Distinguishing characteristics include a thick black bill and black legs (Paulson 2005). Both sexes are similar in appearance, differing mainly in bill size and shape. Male bills are short and blunt, while the longer bills of females have a tapered and slightly drooped form (Farrand 1983). Plumage and body coloration vary with age and season, and descriptions are divided accordingly below.

Breeding Adult
Plumage varies from grayish-brown to mottled brown and black upperparts with an occasional reddish tint (Paulson 2005). The brow feathers (supercilium) and throat are conspicuously white, and the head is marked on each side with a brown loral (between the eye and bill) stripe. The breast usually bears several brown stripes and dots, and the sides of the body are often streaked with brown.

Non-breeding Adult
Plumage is gray-brown with fine, dark streaks at the shaft of the feathers (Paulson 2005). The supercilium and loral stripes are similar to those of breeding adults.

Juvenile
Legs are olive, darkening to black during the fall migration (Paulson 2005). Plumage coloration is quite variable, but most individuals are brownish with feathers fringed in tan and tipped with white, giving the birds a scaled appearance. Breasts of the youngest individuals are tan, fading to white during the first migration.

Potentially Misidentified Species: Several species of sandpipers resemble C. pusilla at first glance. Of these, the western sandpiper, C. mauri, and the least sandpiper, C. minutilla, are most likely to overlap in range. The bill of the western sandpiper is usually longer, thinner and more drooped than that of C. pusilla (Farrand 1983; Paulson 2005). Plumage is very similar between the species, except in breeding adults where the head of the western sandpiper is reddish-brown and sides are distinctly marked with chevrons. The least sandpiper is easily distinguished from C. pusilla upon close examination, characterized by paler legs, shorter wings and browner coloration (Paulson 2005). When plumage and body coloration are similar among species, the semipalmated sandpiper can be identified with practice by its distinct call (see 'Voice' below) (Farrand 1983).

Flight Patterns & Locomotion: While in flight, semipalmated sandpipers form close flocks with a uniform twisting motion that reveals their dark backs followed by the white of their breasts. Flight speeds of some individuals have been recorded up to 50 mph (Terres 1980). Flocks settle on the ground and spread out to feed, running just above the wave line on beaches, in shallow water or on exposed tidal flats (Terres 1980; Collazo et al. 2002). While resting, flocks often huddle closely. Individuals orient into the wind with their bills buried in their back feathers, and frequently stand or lightly hop on one leg (Terres 1980).

Regional Occurrence: Like many shorebirds, C. pusilla is found throughout a large range extended by long seasonal migrations. Breeding occurs in the Arctic from Alaska to the Atlantic Ocean, while wintering and migratory populations can be seen in several locations, including the east coast of the U.S. to southern Florida, eastern Mexico and the Caribbean south to Brazil (Terres 1980; Farrand 1983; Paulson 2005).

IRL Distribution: Little information is available on the distribution of the semipalmated sandpiper in the IRL, but surveys have been conducted at sites such as the Merritt Island National Wildlife Refuge (NWR) (Collazo et al. 2002). Birds are found on tidal flats or salt marshes in the lagoon and in the swash zone of sandy beaches exposed to the coastal waters of the adjacent Atlantic Ocean (e.g. Terres 1980; Paulson 2005).

Age, Size, Lifespan: C. pusilla is a small bird, approximately 14-18 cm in length with a wingspan of 28-33 cm (Terres 1980). Lifespan varies with environmental conditions and other factors, but individuals have been documented to live up to 7 years of age (Terres 1980).

Abundance: The semipalmated sandpiper is considered the most abundant migratory ‘peep’ and one of the most numerous shorebirds in North America (Peterson 1980; Kale 1990). Detailed abundance records for sandpiper populations within the IRL are scarce. However, birds are known to stopover throughout Florida during spring and fall migrations, and some individuals may winter in Florida Bay (Kale 1990).

Reproduction: The leaf and grass-lined nests of C. pusilla are typically built on wet Arctic tundra near lakes or on grassy dunes at low elevations (Terres 1980). Eggs are yellow, tan or olive with cinnamon, hazel or chestnut colored spots (Terres 1980). Clutch size is generally four per nest, suggested by some studies as the maximum number of hatchlings that can be successfully protected by the parents (Safriel 1975). Both parents incubate the eggs until they hatch, a period of about 18-22 days, at which time the females usually vacate the nest and leave the males to brood the hatchlings (Safriel 1975; Terres 1980). Most young are capable of flight 14-19 days after hatching (Terres 1980).

Voice: Semipalmated sandpipers emit a variety of calls, depending on the circumstance. During flight, vocal communication consists of a loud cherk, chert, or chut, which may be doubled. Breeding adults produce a “motorboat” song followed by buzzing. All calls are lower and lack the ee characteristic of the least and western sandpipers (Peterson 1980; Terres 1980; Paulson 2005).

Temperature & Salinity: The natural range of the semipalmated sandpiper extends from Arctic to tropical climate zones, suggesting that the species has a broad thermal tolerance, which is regulated in part by seasonal migration (see 'Habitat & Distribution' above). Individuals may stop over and feed in freshwater and/or coastal marine ecosystems, depending on season and migratory route (e.g. Terres 1980).

Trophic Mode: The semipalmated sandpiper feeds and forages by running with its head down while snapping or probing through the sand in search of prey (Terres 1980). In coastal marine and estuarine habitats, C. pusilla feeds on a variety of benthic organisms, such as amphipods like Corophium volutator, Acanthohaustorius millsi and Protohaustorius deichmannae; polychaete worms; and small mollusks (Terres 1980; Schneider & Harrington 1981; McCurdy et al. 1999). Freshwater and terrestrial prey consists of fly larvae, beetles and other insects (Terres 1980).

Predators: Documented predators of C. pusilla include larger birds such as the snowy owl, Nyctea scandiaca, and jaegers of the genus Stercorarius (Safriel 1975).

Parasites: Like many other bird species, C. pusilla acts as a terminal or final host for several parasites acquired from a variety of prey items. One such example is the parasitic worm, Skrjabinoclava morrisoni, transmitted from the amphipod, Corophium volutator (McCurdy et al. 1999).

Associated Species: Although there are no obligate associations documented between the semipalmated sandpiper and other species, C. pusilla is commonly found alongside other organisms from the salt marshes, tidal flats and sandy beach habitats in which it resides. For more extensive information on these ecosystems and their associated species found in and around the IRL, please visit the Salt Marsh, Tidal Flat and Beach Habitat pages.

Threats & Conservation: Unlike the related red knot, Calidris canutus rufa, populations of the semipalmated sandpiper are strong and no special status has been issued for the species. However, C. pusilla is protected under the Migratory Bird Treaty Act of 1918, which prohibits the harassment, capture, kill and/or possession of listed migratory species (e.g. USFWS 2010). In addition, further conservation efforts by The Western Hemisphere Shorebird Reserve Network are ongoing through the protection of key nesting and stopover sites (Audubon 2010).

Peterson, RT. 1980. A Field Guide to the Birds: A Completely New Guide to All the Birds of Eastern and Central North America. Houghton Mifflin. Boston, MA. USA. 384 pp. 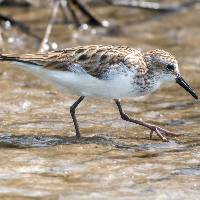