Species Description: Australian pine, Casuarina equisetifolia, is not a pine at all. It is a deciduous dicot angiosperm tree that superficially resembles a conifer (Division Pinophyta). This tall tree typically possesses a single, straight, rough-barked trunk and an open, irregular crown of branches (Snyder 1992, Swearingen 1997).

Small, round, cone-like fruits and long, wispy, grayish-green needle-like branchlets give the tree its pine-like appearance. Leaves are reduced to small scales occurring in whorls of 6-8 leaves per whorl at joints (nodes) along the length of the branchlets. The brown flowers are tiny and non-descript (Langeland and Burks 1998).

Regional Occurrence: The native range of Casuarina equisetifolia includes Malaysia, southern Asia, Australia and Oceania (the islands of the Pacific between Asia and the Americas). The worldwide introduced range includes the Caribbean, including Puerto Rico and the Bahamas, Hawaii, and coastal Florida (ITIS). In Florida, the species occurs from north-central Florida southward through the Florida Keys.

IRL Distribution: Australian pine is well established in all six counties of the IRL watershed.

Abundance: Australian pine is a Category I exotic species in Florida, a designation indicating it is a species which has become so abundant as to displace native plant species and change community structures or ecological functions (FLEPPC 2005).

Reproduction: Casuarina equisetifolia can reproduce sexually via seed, as well as vegetatively through the sprouting of new clonal trunks from existing rootstock. The species is monoecious, in contrast to its co-occurring congeners in Florida, which are dioecious.

Small, inconspicuous flowers are wind pollinated. Oval cone-like fruits (nutlets), which grow up to 3/4 inches in length, contain approximately 12 rows of seeds when mature. Australian pines are capable of flowering for extended periods (even year-round), and individual trees produce thousands of seeds a year (Morton 1980, Elfers 1988).

Embryology: Australian pine seeds possess a membranous wing and are readily dispersed by wind as well as water (Binggeli 1997). Seeds remain viable for up to a year and will germinate in 4-8 days in porous soil with adequate moisture content (Elfers 1988). The young seedlings are sensitive to drought and flood and are also fire-intolerant (Snyder 1992).

Temperature: C. equisetifolia is a cold-sensitive species and is intolerant to frost (Snyder 1992). Genus Casuarina fares poorly outside of mild temperatures ranging from 22.1 to 26.9°C (Duke 1983).

Hydrology: Although it is a shoreline and coastal tree that is very tolerant to salt spray, Australian pine fares poorly in sites prone to prolonged inundation of standing water (Elfers 1988).

Associated Species: Within its native range and in some areas where it has been introduced, Casuarina equisetifolia usually co-occurs with defined community assemblages of lowland and coastal trees, although it is often the dominant species (Whistler and Elevitch 2006). In Florida, C. equisetifolia typically competitively displaces native plant species.

Invasion History: Australian pine reportedly was intentionally introduced to Florida in 1898, as an ornamental tree and also for use as a windbreak to border agricultural groves (Morton 1980). In time, the species proved to be ill-suited for either purpose. The thick, shallow and wide-spreading roots are both disruptive to lawns and pavement and also make the tree prone to being overblown in strong winds (e.g., hurricanes). Casuarina equisetifolia grows too tall to be considered a safe ornamental tree given its tendancy to blow over.

Early on, Australian pine was also utilized in Florida as a a lumber species and in ditch and canal stabilization (Snyder 1992, Swearingen 1997). It ultimately proved to be poorly suited to this latter use, again due to its shallow root system and its tendency to be blown down.

More troubling than its poor utility as a purpose-cultivated species, C. equisetifolia revealed itself to be a highly invasive species in Florida. The species' ability to colonize disturbed and nutrient-poor sites, its high fecundity, protracted reproductive season, broadcast seed dispersal, and tendency to form monospecific stands are traits that make it a highly competent invader.

Australian pine thrives in subtropical climates within open coastal habitats such as coastal strand, sand and shell beaches, dunes and rocky shores (Snyder 1992). It is a capable colonizer of newly disturbed sites.

Australian pine is a fast grower that typically forms monospecific stands that produce a dense shading canopy and also a thick layer of dropped branchlets ('needles') and fruits that blanket the ground below. The roots of C. equisetifolia harbor nitrogen-fixing microbial assemblages that allow the host tree to colonize and thrive in low nutrient soil conditions that many other species cannot tolerate (Swearingen 1997).

Despite an ongoing statewide ban on cultivation, Australian pine is now widely distributed in central and south Florida. It is also an established exotic species in California, Arizona, and Hawaii (Snyder 1992). Worldwide, C. equisetifolia has become broadly established and Duke (1983) notes that it is one of the most common trees on the upland margins of beaches in frost-free zones.

Two established non-native congeners, Casuarina glauca and C. cunninghamiana were also introduced to Florida decades ago. In fact, Elfers (1988) reports that a total of eight nonindigenous Casuarina species were introduced into the United States prior to 1924.

Potential to Compete With Natives: Australian pine is generally the dominant species in competitive interactions with native Florida vegetation. Dense thickets of Australian pine can outcompete and displace mangroves and other native coastal vegetation in Florida. There is evidence that the fallen branchlets are allelopathic in nature, containing chemical compounds that inhibit growth, survival, or recolonization by native plant species.

A monospecific, chemically defended stand of Australian pine offers little in the way of food or habitat value to native wildlife which are likely to exhibit reduced abundance and diversity in stands of C. equisetifolia compared to unaltered stands of native vegetation. Loss of native vegetation reduces habitat quality for mammals, birds, and other native species.

One of the reasons Australian pine was introduced to Florida was, reportedly, to serve as a windbreak on exposed shorelines. However, the tree's thick, shallow roots actually make it more likely to be blown over in high winds than most coastal native trees. Wind-felled C. equisetifolia can exacerbate erosion on beaches and dunes and can also act as a physical barrier inhibiting burrowing by gopher tortoises and beach nesting by endangered sea turtles and American crocodiles where they occur (Elfers 1988, Moler 1991).

Possible Economic Consequences of Invasion: Potential positive economic uses for Casuarina equisetifolia include use as windbreaks, landscape trees, lumber, fuel wood, and several other minor uses. None of these uses are currently pursued in Florida, where a negative economic impact of the species exists.

Competitive displacement of coastal mangrove stands by C. equisetifolia can cause negative economic impacts due to loss of nursery habitat for recreational and commercial fishing, loss of nesting and roosting habitat for birds, etc. Inhaled smoke from burning peppers can cause respiratory problems in some people. 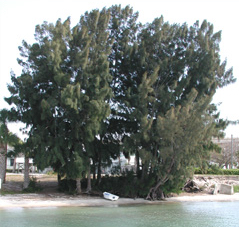