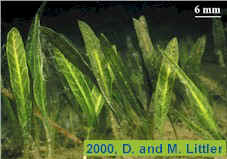 Regional Occurrence: Halophila johnsonii occurs only in the coastal lagoons of east Florida, from Sebastian Inlet to Biscayne Bay (Eiseman 1980).

IRL Distribution: Halophila johnsonii occurs in the southern half of the Indian River Lagoon, often in dense patches, in deep water and on shoals (Virnstein 1995). Eiseman reports that H. johnsonii occurs primarily in the intertidal zone, between stands of Halodule wrightii and the high tide line, but may also occur in mixed patches with H. wrightii. When H. wrightii is not present, H. johnsonii can occur below the low tide level.

Distribution, biodiversity, productivity and ecological significance of seagrasses in the Indian River Lagoon (IRL), FL, are summarized by Dawes et al (1995). Seven species of seagrass, including all 6 species occurring throughout the tropical western hemisphere, as well as Halophila johnsonii, occur in the IRL. Halodule wrightii is the most common. Ruppia maritima is the least common and is found in the most shallow areas of the lagoon. Syringodium filiforme can be locally more abundant than H. wrightii. Thalassia testudinum occurs in the southern portion of the IRL (Sebastian Inlet and south). Halophila decipiens, Halophila engelmannii and Halophila johnsonii can form mixed or monotypic beds with other species. Because of their abundance in deeper water and high productivity, the distribution and ecological significance of the 3 Halophila species may have previously been underestimated

Distributional Changes: Changes in seagrass distribution and diversity pattern in the Indian River Lagoon (1940 - 1992) are discussed by Fletcher and Fletcher (1995). It was estimated that seagrass abundance is 11% less in 1992 than in the 1970's and 16% less than in 1986 for the entire Indian River Lagoon complex (Ponce to Jupiter Inlet). Decreases in abundance occurred particularly north of Vero Beach. In this area of the lagoon, it was also estimated that maximum depth of seagrass distribution has decreased by as much as 50% from 1943 to 1992. Alteration of such factors as water clarity, salinity and temperature could affect the diversity and balance of seagrasses in the Indian River Lagoon system and should be considered when developing management strategies for this resource (Fletcher & Fletcher 1995).

Abundance: H. johnsonii can be locally abundant. It occurs in dense monospecific stands, or in mixed patches only within the confines of the Indian River Lagoon system.

Reproduction: Pistillate flowers were observed in Halophila johnsonii from April to July (Eiseman 1980). Staminate flowers were not observed. This could imply that H. johnsonii is apomictic i.e., reproduces without fertilization. However, the possibility that male flowers in H. johnsonii could be rare, was mentioned by Eiseman and McMillan (1980). An Indian River Lagoon population of H. johnsonii near Jim Island in Fort Pierce, FL was observed flowering in May and June (Dawes et al 1989). Moffler and Durako (1987) report that H. johnsonii flowers April through July and fruits in August.

Seasonality of both growth and biomass is exhibited by all species of seagrass in the IRL, being maximum during April - May and June - July respectively. The significance of seagrass beds as habitat, nursery and food source for ecologically and economically important fauna and flora, as well as various management strategies for seagrass beds of the IRL are discussed in Dawes et al. (1995).

Temperature: Water temperatures in the IRL ranged from a low of 21.0 to a high of 36.0°C, and cover the period from March through September (Phillips 1970). When Halophila johnsonii, an intertidal to shallow subtidal species, was compared with deeper water populations of H. decipiens, H. johnsonii showed greater tolerance to variations in salinity and temperature as well as higher irradiances (Dawes et al 1989).

Salinity: Salinity for Halophila johnsonii occurring in the IRL ranges from 24.3 to 38.0 ppt. The occurrence of Halophila johnsonii throughout the year at salinities as high as 43 ppt was documented (Eiseman & McMillan 1970, Eiseman 1980). H. johnsonii showed greater tolerance to variation in salinity than did a related species, H. decipiens.

Virnstein (1995) suggested the "overlap vs. gap hypothesis" to explain the unexpectedly high (e.g., fish) or low (e.g., amphipods) diversity of certain taxa associated with seagrass beds. In a highly variable environment such as the Indian River Lagoon, diversity of a particular taxa is related to its dispersal capabilities. For example, amphipods, lacking a planktonic phase, have limited recruitment and dispersal capabilities, whereas highly mobile taxa such as fish (which also have a planktonic phase) would tend to have overlapping species ranges and hence higher diversity (Virnstein 1995). For an extensive treatment of seagrass community components and structure including associated flora and fauna, see Zieman (1982).

For an extensive treatment of seagrass community components and structure, including associated flora and fauna, see Zieman (1982). The significance of seagrass beds as habitat, nursery and food source for ecologically and economically important fauna and flora as well as various management strategies for IRL seagrass beds are discussed by Dawes et al (1995).

Direct grazing on Florida seagrasses is limited to a number of species, e.g., sea turtles, parrotfish, surgeonfish, sea urchins and perhaps pinfish. Other grazers e.g., the queen conch scrape the epiphytic algae on the seagrass leaves (Zieman 1982). One hundred and thirteen epiphytes and up to 120 macroalgal species have been identified from Florida's seagrass blades and communities respectively (Dawes 1987).

Notes on Special Status: Virnstein (1995) stressed the importance of considering both geographic scale and pattern (landscape) in devising appropriate management strategies to maintain seagrass habitat diversity in the Indian River Lagoon. It was suggested that goals be established to maintain seagrass diversity and that these goals should consider not only the preservation of seagrass acreage but more importantly, the number of species of seagrass within an appropriate area. By maintaining seagrass habitat diversity, the maintenance of the diverse assemblage of amphipods, mollusks, isopods and fish, associated with seagrass beds, will be accomplished (Virnstein 1995).