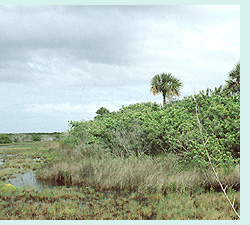 Species Description: Brazilian pepper, Schinus terebinthifolius, is a highly invasive non-native species that is widespread throughout Florida. It grows as an evergreen shrub or a small- to medium-sized tree with a short trunk or trunks typically giving rise to a dense tangle of numerous intertwining branches (Hall et al. 2006).

Leaves are compound and alternately arising off of branches, and comprised of typically 4-6 paired lateral leaflets and a terminal leaflet all arising from a narrow leaf axis. The leaflets are oblong-elliptical, 2.5-5 cm long, dark green above and paler below with readily apparent lateral veins arising from a central leaflet midrib. Leaflet margins may be somewhat toothed. The leaves are highly aromatic when crushed, giving off a peppery or turpentine-like smell (Ferriter 1997, Langeland and Burks 1998, Hall et al. 2006).

Small (2 mm long) white, flowers with 5 petals occur in short-branched clusters at the leaf axils of stems produced in the current season. The fruit grow as bunches of 5-6 mm diameter bright-red, spherical and berry-like drupes that each contain a single pit and seed. The highly visible fruit gives S. terebinthifolius the alternate common names Florida holly and Christmas Berry (Ferriter 1997, Langeland and Burks 1998).

S. terebinthifolius also bears some resemblance to some trees in the mastic family, including the false mastic (Sideroxylon foetidissimum) with which it co-occurs in the IRL watershed. The fruits of the mastic are larger than those of Brazilian pepper, are yellow-orange in color, and edible with a gummy pulp.

Regional Occurrence: The native South American range of S. terebinthifolius includes Brazil, Argentina, and Paraguay (Langeland and Burks 1998). It occurs elsewhere, often intentionally introduced for purposes of cultivation. More than 20 years ago, Brazilian pepper had already been reported as successfully naturalized in over 20 countries occupying the sub-tropical belts (15-30°) of both the northern and southern hemisphere (Ewel et al. 1982).

Within the U.S., Brazilian pepper is a highly invasive species in Florida and Hawaii. It is still grown as an ornamental plant in Texas, Louisiana, Arizona, and California. The Florida distribution of S. terebinthifolius now includes most of the peninsula, extending north to at least Levy County on the Gulf coast and all the way to the Florida-Georgia border on the Atlantic coast. Within its introduced range, S. terebinthifolius readily invades a wide variety of natural, disturbed, and urbanized habitats in mesic to wet lowland environments, including coastal shorelines, riparian zones, wetlands, forested areas, scrub, range/grasslands, agricultural lands, and urban spaces (Woodall 1982, Laroche 1994, Langeland and Burks 1998).

Age, Size, Lifespan: S. terebinthifolius is often encountered as a shrub or small tree growing to a height of 3-7 m. It can grow to be substantially taller, to as much as 13 m (Ferriter 1997, Langeland and Burks 1998). Some individuals can live as long as 35 years (Hall et al. 2006).

Male flowers only last 1 day, while female flowers can last up to 6 days (Hall et al. 2006). The plant depends on diurnal insect pollinators including a number of true flies, bees and wasps, and butterflies. The syrphid fly Palpada vinetorum may be particularly important. Outcrossing is the general rule for the species (Ferriter 1997).

The main flowering season occurs from September to October or November, although in Florida some plants can usually be seen in flower an any time of year. Large numbers of small flowers are produced. This is followed by a winter period of fruit production from November through February, during which female trees produce a tremendous amount of fruit that may persist ripe for as much as 8 months. A small number of trees (less than 10%) also flower from March to May (Ewel et al. 1982, Ferriter 1997, Langland and Burks 1998, Hall et al. 2006).

Embryology: Ripe fruits are consumed by birds and mammals and this is an important dispersal route for the seeds. Germination success is enhanced if seeds are exposed to dilute acid in the lab, and seed passage through the acidic environment of an animal's digestive tract may have a similar positive effect (Hall et al. 2006). Water and gravity are secondary dispersal agents (Ewel et al. 1982, Ferriter 1997). Seedling survival rate is high and seedlings rapidly take advantage of canopy breaks to gain a foothold in new area (Hall et al. 2006).

Temperature: Brazilian pepper has thrived in many subtropical areas into which it has been introduced, but cold intolerance precludes expansion of the species into more temperate regions (Ferriter 1997). Cold sensitivity also restricts the distribution of S. terebinthifolius to somewhat protected sites in central Florida (Hall et al. 2006).

Fire: S. terebinthifolius seeds are readily killed by fire. Seedlings and saplings are killed back by fire as well, though approximately 20% of seedlings resprout after a fire. In contrast, fire has proven to be a poor control tool for mature peppers (trees greater than 1 m tall. Fire management programs has been shown effective if they target plants before that attain fire-resistant heights (Nilsen and Muller 1980, Loope and Dunevitz 1981, Ferriter 1997, Hall et al. 2006).

Associated Species: Brazilian pepper relies on a variety of insects to pollinate its flowers, and fruit-eating birds and mammals to disperse its seeds. It tends to outcompete and crowd out other types of vegetation as it grows into and overtakes both natural and disturbed areas.

Invasion History: The bright red fruit, shiny green leaves, and ease of cultivation led to widespread use of Brazilian pepper as an ornamental plant as far back as the mid-19th century. The plant was listed in seed catalogs as early as 1832 and was imported to Florida as a cultivated ornamental some time in the 1840s (Barkley 1944, Mack 1991, Hall et al. 2006).

Brazilian pepper apparently remained under controlled cultivation in Florida for approximately the next 80 years. Then, in the mid-1920s a horticulture hobbyist living in Punta Gorda gave hundreds of seedling pepper plants he had grown away to friends who planted them in their yards and along Florida city streets Morton 1978, Ferriter 1997). Even so, Ewel et al. (1982) note that S. terebinthifolius did not become conspicuous as an invasive pest until the 1950s. A survey of the plants of the Everglades by Davis (1942) made no mention of Brazilian pepper. By 1969, however, Everglades National Park staff biologists had recognized the threat posed by S. terebinthifolius and its capacity to invade and dominate the natural areas of much of south Florida (Morton 1978, Ferriter 1997).

Potential to Compete with Natives: Brazilian pepper is listed as a Category I invasive exotic plant in Florida, indicating that the species is currently altering native plant communities by displacing native species and changing community structures or ecological functions. S. terebinthifolius is also listed by ISSG as as among "100 of the Worst" global invasive organisms.

Once it invades an area, S. terebinthifolius can quickly form dense, monotypic stands that shade out or physically exclude native species. This typically lowers the habitat value for the animals associated with the native system, and may dramatically alter natural fire regimes as well (Florida Department of Environmental Protection). A number of natural Florida communities are susceptible to invasion by S. terebinthifolius. Even mature mangrove stands and upland forests are vulnerable to infestation (EPPO Reporting Service 2005).

Allelopathy (chemical inhibition of potential competing species) has long been suspected in S. terebinthifolius, based on the well-documented ability of the leaves, flowers, and fruits to produce or accumulate chemical irritants (Gogue et al. 1974, Morton 1978, Ewel et al. 1982). Morgan and Overholt (2005) demonstrated that aqueous extracts from the leaves of Brazilian peppers could suppress germination and growth of some native Florida plant species under laboratory conditions. Field evidence confirming allelopathy and quantifying its contribution to the competitive success of S. terebinthifolius remain lacking.

S. terebinthifolius in Florida has displaced local populations of imperiled species including the federally listed (Endangered) beach clustervine, Jacquemontia reclinata, and the state listed (Endangered) beach star, Remirea maritima (Langeland and Burks 1998). Curnutt (1989 reports that both abundance and diversity of birds communities were lower in areas dominated by S. terebinthifolius than in native pinelands and forest-edge habitats.

Possible Economic Consequences of Invasion: Arguments can be made that Brazilian pepper is of some potential or actual positive economic value. Historically, S. terebinthifolius was of economic benefit as a cultivated landscape ornamental. Commercial use was banned in 1990, but utilization as an ornamental plant had ceased well before this time (Ferriter 1997).

Utilization as a commercial timber species is impractical for a number of reasons, including poor strength characteristics and harvesting and processing difficulties. Limited exploration of the possibility of harvesting Brazilian pepper for the paper pulp industry has been conducted (Morton 1978).

In its native range, Brazilian pepper is used in a variety of folk remedies for an array of ailments, including skin ulcers, bronchitis, gout, arthritis, diarrhea and infertility (Morton 1978).

Florida S. terebinthifolius populations are perhaps most valuable for the role they play in the state's honey industry. It is an efficient producer of nectar even if the honey it produces is not universally regarded as high quality (Sanford 1988). S. terebinthifolius is important for winter honeybee colony maintenance; Florida beekeepers sell from 6 to 8 million pounds of Brazilian pepper honey each year (Ferriter 1997).

The actual or potential positive economic aspects of S. terebinthifolius in Florida must be considered along with the negative consequences of infestation. Federal, state, and local government agencies and a number of private conservation groups spend untold sums of money and time on Brazilian pepper control efforts. Mechanical harvesting and hand-application of herbicide to cut stumps are typical components of most Brazilian pepper removal programs, and both are costly. Furthermore, the tendency of S. terebinthifolius to resprout from cut stumps, even after herbicide application, necessitates expensive follow-up treatments.

In addition to the direct costs associated with S. terebinthifolius removal, the negative impacts on Florida's nature-based tourist industry must be considered. S. terebinthifolius infestation reduces biodiversity and habitat value for associated wildlife, therefore diminishing the value of Florida wildlands as eco-tourism destinations. There is also some negative cost associated with human health impacts related to Brazilian peppers. Some individuals experience allergic reactions or contact dermatitis when they encounter the leaves or sap. Additionally, the smoke from burning Brazilian peppers is noxious and may cause or exacerbate respiratory ailments (Morton 1978, Ewel et al. 1982, Ferriter 1997).

Laroche F.B. and G.E. Baker. 1994. Evaluation of several herbicides and application techniques for the control of Brazilian pepper. Aquatics 16:18-20.

Nilsen, E. and W. Muller. 1980. A comparison of the relative naturalization ability of two Schinus species in southern California. I. Seed germination. Journal of the Torrey Botanical Society 107: 51-56. 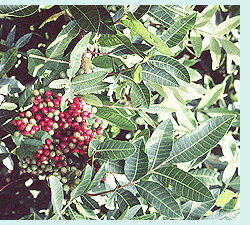