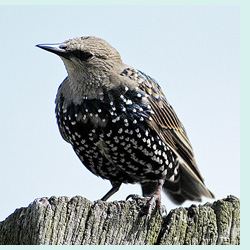 Species Description: The European starling (Sturnus vulgaris) is a small bird native to Europe but now widely distributed throughout the U.S. In both males and females, the nape, breast and back are covered in iridescent green glossed feathers while the wings are black, sometimes with a sheen that is green or purple in color. The breast may become flecked with white during the winter months. The legs are reddish brown and the irises are dark brown, and the bill is yellow during mating season and black for the remainder of the year (Weber 1979, Craig and Feare 1999, Chow 2000).

The vocalizations of S. vulgaris are variable and complex, consisting of warbles, clicks, whistles, creaks, chirrups, chips, gurgles and other component sounds (Chow 2000).

Potentially Misidentified Species: The physical characteristic noted above should be sufficient to identify S. vulgaris by sight. The species is noted to be an accomplished mimic, however, and misidentification of the vocalizations of this species is therefore possible (Chow 2000).

Regional Occurrence: Introduced to North America in 1890, S. vulgaris now occurs throughout most of the continent. The greatest densities in the U.S. occur in the Midwest and Mid-Atlantic states, but the species can also be found throughout Florida.

IRL Distribution: S. vulgaris is established throughout the state, including the 6 counties of the IRL watershed.

Age, Size, Lifespan: Adult European starlings reach a length of 21.5 cm and a weight of 70-100 g. They are long-lived; one wild individual is documented to have lived more than 15 years. Banding studies have shown individuals may live up to 21 years (Chow 2000, CWBO 2004).

Abundance: S. vulgaris is one of the world's most abundant birds (Kahane 1988; Craig and Feare 1999).The 1994 U.S. S. vulgaris population was estimated at 140 million birds and the expanding population is likely now to be substantially larger. Migrating flocks may consist of up to 3,000 individuals (Chow, Kern 2001). In the late spring through late summer, starlings are commonly encountered in Florida as dispersed pairs.

In the fall and winter, they aggregate as large migrating flocks, although a year-round Florida population exists as well (Chow 200, Kern 2001).

Reproduction: Reproduction is sexual and oviparous. The breeding season generally persists from late spring through mid-summer. In the Northern Hemisphere the season typically occurs from late March and to early July, and in the Southern Hemisphere, from September through December.

Clutch sizes average 4-6 eggs and females may produce up 3 clutches over the course of a breeding season. The species is polygynous, with males breeding with multiple females (Kahane 1988, Craig and Feare 1999, Kern 2001).

Embryology: Nest incubation lasts from 11-15 days. Nesting duties are shared between males and females, but females possess a more prominent incubation patch (a defeathered abdominal area with thickened skin and a rich blood vessel bed) and incubate the eggs for the majority of time.

Hatchlings are helpless at birth and feeding and nestkeeping chores are shared by both parents. Male parental care is minimal for clutches they may sire late in the season. Young are fed only soft animal food initially, and over time the diet expands to include a vider variety of animal and plant material. Young remain in the nest for 21-23 days and may rely on parents to feed them for a few days beyond this. Young birds leave the nest to form flocks with other young birds (Kahane 1988, Craig and Feare 1999, Chow 2000, CWBO 2004).

Temperature: At environmental temperatures between 15-40°C S. vulgaris can maintain its body temperature without energetic expenditure. They can survive at lower temperatures by expending energy to produce body heat (Collins 2007).

Invasion History: Native to Eurasia and North Africa, Sturnus vulgaris was intentionally introduced to North America in 1890-1891. Accounts reveal that a New York industrialist inspired by the portrayal of the bird in the plays of William Shakespeare released 100 individuals in Central Park, although several other attempts at introduction were also made (Chapman 1966). The birds introduced to New York rapidly multiplied and expanded their introduced range. The species was first reported from Florida in 1918, less than 30 years after the initial introduction, and the first report of nesting activity in Florida dates to Pensacola, 1932. By 1949, Sturnus vulgaris nesting had expanded to Orlando (Sprunt 1954).

In the U.S. the species is considered to be established and expanding, and eradication is not considered to be a plausible form of management (ISSG). High fecundity, polygynous reproductive behavior, and broad generalist dietary and habitat requirements facilitate the ability of S. vulgaris to rapidly multiply and invade new areas (Craig and Feare 1999; Kahane 1988).

Potential to Compete with Natives: European starlings are aggressive competitors capable of displacing native populations. The generalist feeding habits and efficiency at foraging for invertebrates as well as seeds and fruits suggests Sturnus vulgaris are likely to come into direct competition with a wide range of co-occurring birds.

Possible Economic Consequences of Invasion: Although Sturnus vulgaris is an important consumer of crop-damaging insects, the net economic effect of this introduced species is negative. The primary impact of Sturnus vulgaris is related to the agricultural crop damage the species causes. Large migrating flocks can inflict massive damage to fruit and grain crops. Starlings also harbor a number of diseases that pose serious health risks for human populations, including blastomycosis, beef measles, and histoplasmosis. Additionally, they are a nuisance species that poses an airstrip hazard, and can damage roof linings amd other human-made structures (Weber 1979, Kahane 1988, Craig and Feare 1999, Chow 2000, Adeney 2001).

Sturnus vulgaris is listed by ISSG as as among "100 of the Worst" global invasive organisms. 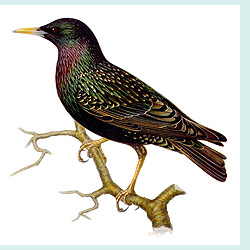