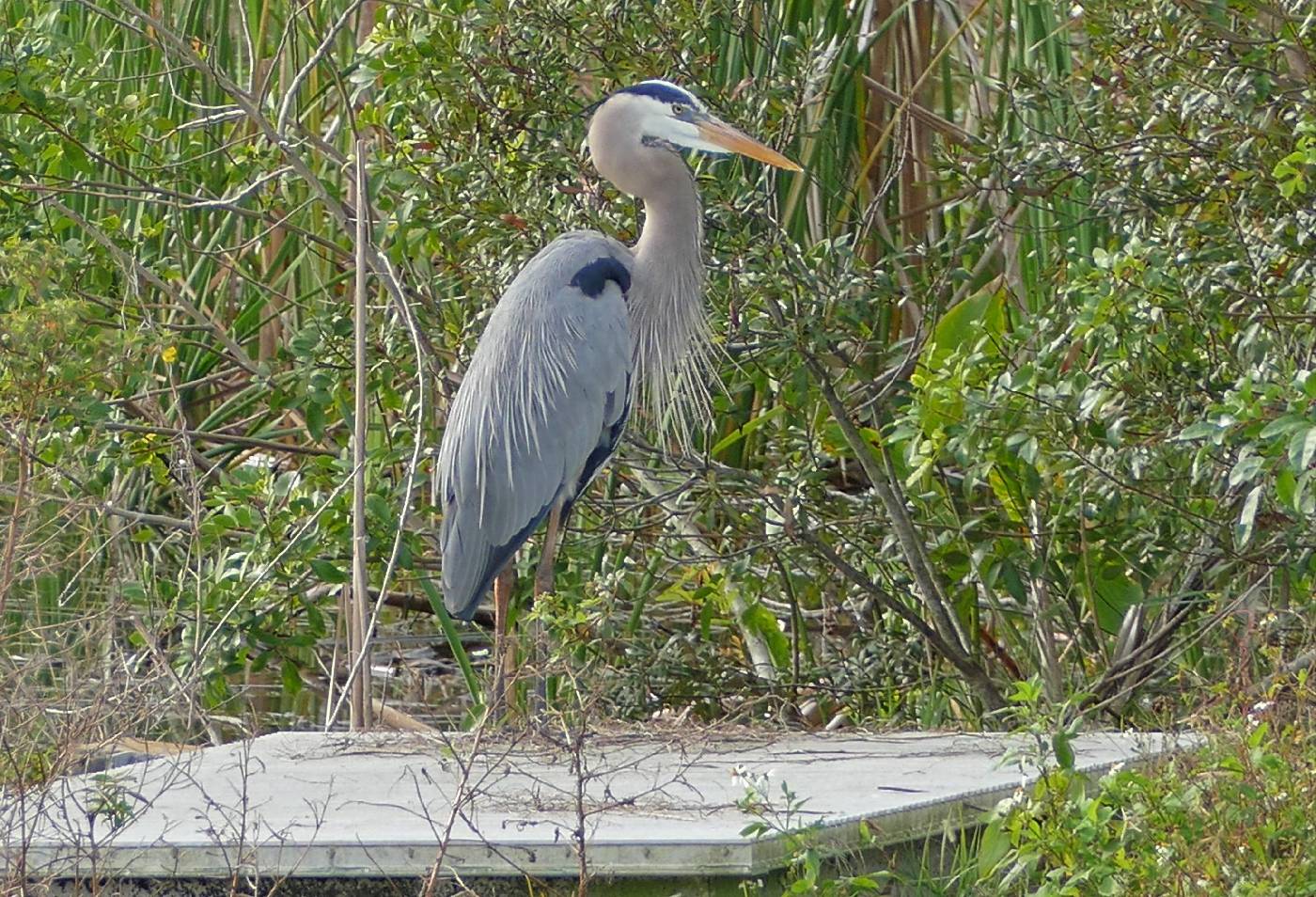 Species Description: Ardea herodias is a tall, long-necked wading bird of the Order Ciconiiformes (herons and storks), and is the largest of the North American herons. The sexes are similar in this species, with overall body color a dull blue-gray. It has a thick yellow bill, black shoulders, and legs that generally match the body color. A major identifying trait is the white face that has a black streak extending from behind the eye to the back of the head.

IRL Distribution: A. herodias is distributed throughout the Indian River Lagoon.

Age, Size, Lifespan: The largest heron in North America, great blue herons attain a height of 38 inches, with a wingspan of 70 inches.

Abundance: The great blue heron is generally the most well known and widespread heron species in North America. It is common throughout the Indian River Lagoon.

Reproduction: Though sympatric with other species of wading birds, the great blue heron forms monospecific breeding colonies. This behavior differs from species such as the snowy egret and white ibis that nest in large mixed flocks. Colony size in great blue herons can be large, ranging between 5 - 500 nests per colony, with an average of approximately 160 nests per colony.

Nesting in the Florida Everglades and Lake Okeechobee begins between late November through mid-March and April, with nests sometimes located as high as 20 m above the ground (Butler 1993; Smith 1997). Clutch size ranges from 3 - 6 eggs, with 1 brood being raised each year. Should eggs be abandoned or destroyed, a replacement clutch can be laid (Ehrlich et al. 1988).

Reproductive success in great blue herons is limited by the ability of parent birds to gather food. Energy availability (as measured in food resources) appears, in part, to determine when eggs will be laid. Butler (1993) observed that egg laying in great blue herons occurs after a threshold level for successful egg laying is surpassed for several consecutive days. Chicks are generally present after parental food availability peaks. This leads to a potential problem in nourishing nestlings. Parental birds have been shown to consume up to 4 times as much food when they are feeding young chicks than when egg laying or incubating eggs (Butler 1993); however, chicks do not reach their metabolic peak until approximately 26 - 41 days after birth. Thus, if food availability has already peaked before chicks appear, it is then potentially more difficult for parents to nourish nestlings. There is some data to support this view. Collazo (1981) found that starvation was not only the primary cause of nestling mortality, but that it most often coincided with the peak energy demands of 3 - 6 week old chicks.

A. herodias is negatively affected by human disturbance, particularly during the early stages of the breeding cycle. Repeated human intrusion into nesting areas often results in nest failure, with abandonment of eggs or chicks (Carlson and McLean 1996). Great blue herons thus tend to choose nest sites in undisturbed wetland areas around lakes or rivers, well removed from roads (Gibbs and Kinkel 1997) and other signs of human activity. In one Ohio study, foot traffic was observed to be the most detrimental disruption to breeding great blue herons, sometimes leading to nest abandonment. Nesting birds were shown to tolerate routine mechanical disturbance, even if loud, as long as no humans were nearby (Carlson and McLean 1996). Nest success increased when nest sites were chosen near barriers such as fencing, ditches or moats that excluded human intrusion. Nests located in areas with this type of buffer zone, even if small in overall area, had higher nest success and fledging rates than those located near disturbed areas.

Embryology: Eggs are incubated for approximately 28 days and hatch asynchronously over a period of several days (Custer and Peterson 1991). The first chick to hatch becomes more experienced in food handling and aggressive interactions with siblings, and so often grows at a faster rate than its nestmates. Male and female chicks show little difference in hatching weight, but males tend to grow somewhat faster than females. By the time fledging occurs, males often weigh up to 13% more than females. Young fledge after 56 - 60 days (Ehrlich et al. 1988).

Temperature: A. herodias is eurythermal. This species has been known to overwinter as far north as British Columbia and New England. There are also records of great blue herons overwintering in bays along the Alaskan coast. However, many of these Alaskan birds do not survive harsh winters.

Trophic Mode: As large wading birds, great blue herons are able to feed in deeper waters, and thus are able to exploit a niche not open to most other heron species. Primary feeding behaviors in this species include standing crouched, standing upright, and wading slowly. Great blue herons have high striking efficiency (the percentage of strikes that result in the capture and ingestion of prey) when standing crouched on banks. However, this behavior is used less often than either standing upright or wading slowly. This suggests that the goal for great blue herons may not be achieving maximum feeding efficiency; but rather, maximizing food intake through the infrequent capture of high quality prey (Willard 1977). Data seem to reinforce this point, as it has been shown that great blue herons that utilize the rather inefficient slow wade as a feeding strategy tend to feed upon more large fish such as eel and perch (Willard 1977).

In a Canadian study of great blue herons, Butler (1993) found that A. herodias fed primarily upon sticklebacks, shiners, sea perch, pipefish, sculpins, etc., and that they require approximately 30% more energy above basal metabolic costs to fuel their activities.

Activity Time: Butler (1993) stated that the nocturnal feeding behavior observed in great blue herons was important to resource partitioning and reduced competition among wading birds. In a Cedar Key, Florida study, Black and Collopy (1982) found great blue herons to be equally active in either daylight or evening hours, though most evening feeding occurs during early evening low tides than later in the evening.

Associated Species: A. herodias is generally considered a solitary feeder, though it has been observed to associate with other wading birds of various sizes while feeding. While breeding, A. herodias avoids mixed flocks in favor of nesting in monospecific colonies.

Special Status: Great blue herons are among the most well known and most common of the wading bird species. It is not federally listed as either threatened or endangered, nor is it listed in Florida as a Species of Special Concern (SSC). 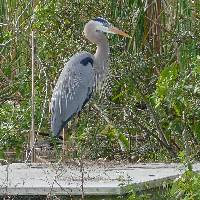