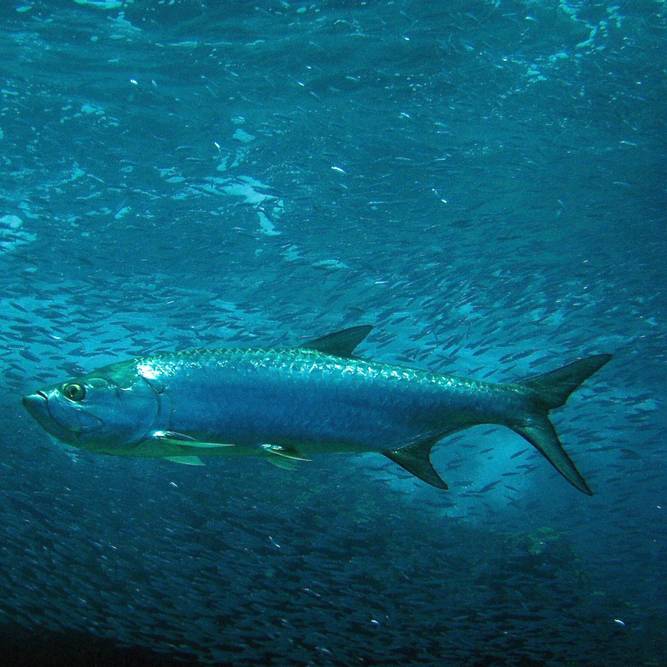 Species Description: Tarpon (Megalops atlanticus) are large, deep-bodied fish commonly found in coastal and inshore waterways. Body color on the dorsal surface is generally dark blue or green to black, The sides and ventral surface are silver. Pelvic fins are abdominal, the caudal fin is deeply forked, and the single dorsal fin is short with a long, filamentous terminal fin ray. The scales of this species are large and cycloid, with 40-48 lateral scale lines. The mouth is large, with a protruding lower jaw. Members of the family Elopidae have pronounced gular plates that span the lower jaw bones on the underside of the head.

Regional Occurrence: Megalops atlanticus occurs in the Western Atlantic Ocean from Nova Scotia to Brazil, including Bermuda, the Caribbean, and the Gulf of Mexico. It is most common south of the Carolinas.

IRL Distribution: Tarpon are distributed throughout the Indian River Lagoon.

Age, Size, Lifespan: M. atlanticus can attain a size of 8 feet in length (2.4 m), weighing as much as 280 pounds (128.4 kg). Tarpon are sexually dimorphic, with females growing larger than males. A study by Crabtree et al. (1995) showed that of the 1,469 tarpon examined, mean fork length (FL) of large females sampled from the recreational fishery was 167.7 cm FL. Mean fork length among males sampled was 144.7 cm. Otolith examination shows that tarpon can also be extremely long-lived. Crabtree et al. (1995) reported that the oldest female tarpon examined in their study, which measured 204.5 cm in fork length, was approximately 55 years old, while the oldest male, which measured 171 cm fork length, was 43 years old.

Abundance: Tarpon are common from the Atlantic coast of central Florida, around the Florida peninsula, the Gulf of Mexico, and the Caribbean. On the Western Florida coast, they are often observed in large schools 2-5 km offshore during the mid-summer spawning season. They become far less common north of North Carolina (Boschung et al. 1983), however, tarpon are known to occur as far north as Nova Scotia.

It has been suggested that lunar phase may be an important trigger for spawning activity. Data from Crabtree et al (1995) show that successful hatching of tarpon eggs occurs 3 - 5 days following a full moon, and 0 - 7 days following a new moon.

The leptocephalus stage persists for 2 - 3 months (Crabtree 1995). during this period, leptocephali are transported on currents from offshore waters back to coastal waters, and eventually into estuaries where they complete development. Metamorphic larvae are most often found in mangrove-lined estuaries and in Spartina saltmarshes (Harrington 1958, Crabtree et al. 1995).

Physical Tolerances: Tarpon are obligate air breathers (Edwards 1998) and are physostomous, meaning they possess a duct that connects the gas bladder to the esophagus. This anatomical feature allows the gas bladder to act as a lung, and enables tarpon to live in oxygen-poor waters (Bond 1996).

Trophic Mode: Tarpon occurring in Florida and throughout the Gulf of Mexico feed primarily on species such as sardines, anchovies, mullet, snook, cichlids, and crabs (Whitehead and Vergara 1978). In a Costa Rican study (Chaverri 1994), smaller juvenile tarpon (<9 cm) fed primarily on copepods (40%), insects (23%) and detritus (26%) while larger juveniles (>9cm SL) fed primarily on fishes (30%), and insects (30%). A study conducted in Columbia (Catano and Garzon-Ferreira 1994) showed that smaller tarpon (12 - 53 cm) have diets which very according to habitat type and season. In spring, (March through May), tarpon sampled from river mouths in Columbia fed primarily on mullet (39%) and other fishes (43%).

However, in fall (October to December), mollies and other poecilids composed the bulk of the diet (56%), with mullet (8%) and insects (17%) also included. Tarpon sampled from swamps in Columbia showed a similar pattern. In spring, mullet (37%), insects (21%) and penaeid shrimp (11%) composed the bulk of the diet; but in the fall, poecilids (65%) and insects (19%) are more prominent.

Benefit in IRL: The tarpon is highly prized as a recreational fish due to its tremendous strength and fast swimming speed. However, it is not valued as a food fish.

Economic Importance: The Indian River Lagoon generates approximately 731 million dollars annually to the Florida economy. Of this, approximately 465 million dollars is generated by recreational activities such as sport fishing, boating, water sports, hunting, and ecotourism activities (data provided by St. Johns River Water Management District). As the tarpon is among the most important of Florida's recreational species, it directly contributes to Florida's economy.

Since 1989, implementation of a permit system in the tarpon fishery requires anglers to pre-purchase a $50.00 permit in order to harvest a tarpon. This process has resulted in a tremendous increase in catch-and-release fishing for this species, with approximately 100 fish per year legally harvested (Crabtree et al. 1995). Data from Edwards (1998) shows that release mortality in the tarpon fishery is low when fish are hooked in the jaw, are brought to the boat and released within a relatively short period of time, and are not removed from the water while being released. Fish handled in this manner were shown to recover quickly and resume normal activities within a short period of time.

Crabtree, R.E., 1995. Relationship between lunar phase and spawning activity of tarpon (Megalops atlanticus), with notes on the distribution of larvae. Bull. Mar. Sci. 56(3):895-899. 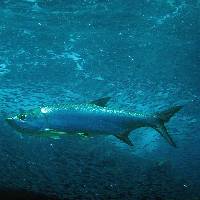