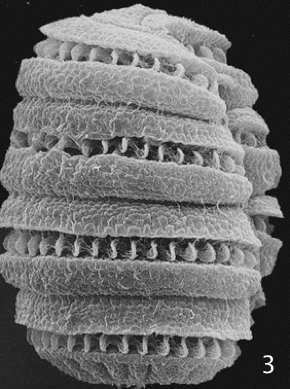 Species Description: Polykrikos schwartzii is a barrel-shaped non-thecate pseudocolonial species with mostly 4 (Figures 2, 3 ) or 8 (Figure 1) slightly compressed cells (occasionally 16), each individual of which has the general form of a Gymnodinium. Each individual, called a zooid, is closely appressed to its neighbor without separating cell membranes, each with a median cingulum but all sharing a common sulcus. The number of nuclei is normally one half the number of zooids. The zooids possess numerous prominent nematocysts, lack chloroplasts, and the cytoplasm is a transparent green or pink. Cysts are sometimes seen, and these are brown and covered with honeycomb-like ridges that produce a coarsely rugose appearance (Figure 5).

Potentially Misidentified Species: P. schwartzii resembles P. kofoidii in general appearance, but the latter is distinctly ridged on the hypotheca (hyposome) of each zooid, the cinguli are more displaced on each zooid, and the pseudocolony normally has only 4 cells. The cysts of the two species are almost indistinguishable. Polykrikos lebourae has 8 zooids, but has golden-brown chloroplasts (thus photosynthetic) and is benthic.

Habitat: The species is planktonic, mostly confined to coastal waters and estuaries.

Regional Occurrence: P. schwartzii apparently has a worldwide distribution in neritic environments, except for polar seas. However, confusion with P. kofoidii makes its exact distribution uncertain.

Trophic Mode: Nutrition is holozoic, by phagocytosis of diatoms, dinoflagellates and other protists. Prey is probably captured by means of stinging nematocysts.

Apical Groove: Groove located at the anterior part of many dinoflagellate species, extending posteriorly on both the ventral and dorsal surfaces of the cell; also known as the acrobase.

Apical Plates: Plates that surround and touch the cell apex.

Apical Pore Complex: A pore or hole at the cell apex that may have one or more tiny accessory plates; sometimes abbreviated as ‘APC’.

Areolate: Ornamentation of the thecal plates that consists of depressions of variable depth and form.

Cingular Plates: Plates that are located in the cingular, or girdle, groove around the cell.

Cingulum: A furrow encircling the cell that contains the rotatary flagellum.

Dorsal Side: Back side of the cell, opposite of the front ventral side where the sulcus is located.

Epicone: The part of a dinoflagellate cell above the cingulum; usually refers to an ‘unarmored’ (lacking cellulose plates) cell; may also be known as the epitheca or episome.

Epitheca: The part of a dinoflagellate cell above the cingulum; usually refers to a thecate (with cellulose plates) cell; may also be known as the epicone or episome.

Flagellar Area: The vicinity of the origin of the two flagella.

Hypocone: The part of a dinoflagellate cell below the cingulum; usually refers to an ‘unarmored’ (lacking cellulose plates) cell; may also be referred to as the hypotheca or hyposome.

Hypotheca: The part of a dinoflagellate cell below the cingulum; usually refers to a thecate (with cellulose plates) cell; may also be referred to as the hypocone or hyposome.

Lists: Membranous extensions of the cingulum and/or sulcus that extend beyond the cell wall boundary; found in thecate dinoflagellates, especially those from the order Dinophysiales.

Median Cingulum: A cingulum that encircles approximately the midpoint of the cell.

Pores: Openings in the theca that can be involved in the extrusion of certain structures from the cell; genetically variable and used for identification of species; also known as trichocyst pores.

Postmedian Cingulum: A cingulum that encircles the cell below the midpoint.

Premedian Cingulum: A cingulum that encircles the cell above the midpoint.

Thecate: One of many dinoflagellates having a cell wall of cellulose plates, which have special designations and symbols according to their location on the cell. Number and location of thecal plates is often genus-specific. 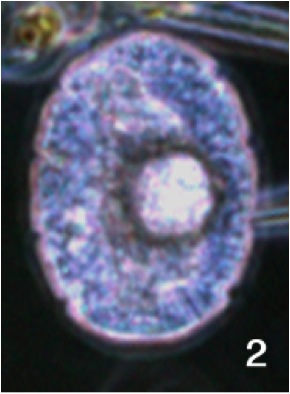 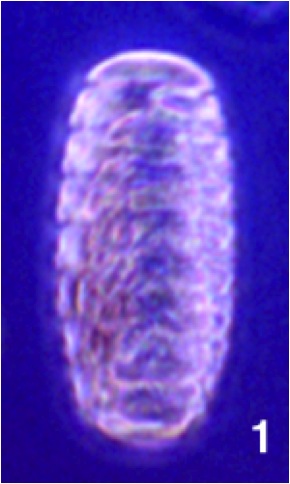 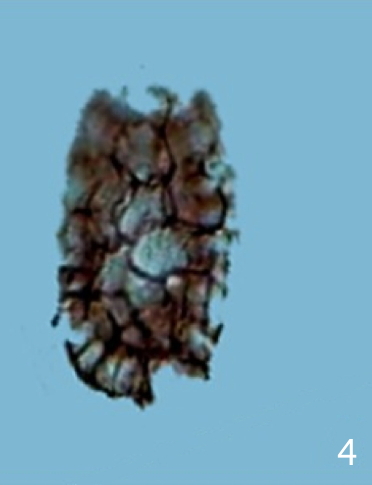