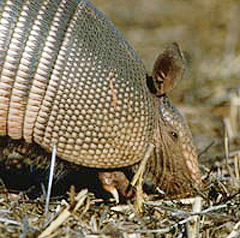 Species Description: The nine-banded armadillo, Dasypus novencinctus is an easily recognized small mammal considered non-native to the state of Florida. The leathery skin and the carapace of bone-like dermal plates on the back, sides, tail, and top of the head are the prominent identifying features of this animal. The carapace is flexible at the body mid-section due to the presence of a series of overlapping/telescoping bands of dermal plate connected to each other by pliable and hairless skin. Despite the common name, these bands vary in number from as few as 7 to as many as 11. Nine bands are typical in the central portion of the distribution range, but individuals from the northern and southern parts of the range more typically exhibit only eight bands. The head is small, tapering to a pig-like snout adapted for rooting, and the relatively large ears are about half the length of the head (McBee and Baker 1982, Fox 1999).

Forelimbs possess four digits and the hind limbs have five. The short, muscular limbs and the long, sharp, curved claws are additional adaptations for a digging/rooting forager. The teeth are reduced with incisors and canines lacking. The teeth the animal does possess are simple and peg-like and lacking enamel in adults (McBee and Baker 1982, Fox 1999).

Regional Occurrence: Dasypus novencinctus is originally from South America, and has historically occurred from Peru and northern Argentina north into the southern part of Texas. Range expansion within the United States has been occurring since the 1850s and the animal now occurs throughout most of Texas and is typically also found east into Louisiana, Alabama and Florida and as far north as Oklahoma and Kansas (Wolfe 1968, Fox1999). The animal is occasionally encountered in Missouri and South Carolina (Schaefer and Hostetler 2003). Van Deelen et al. (2002) reported a single dead specimen from central Illinois and indicated this was the northernmost record of the species east of the Mississippi River.

IRL Distribution: Schaefer and Hostetler (2003) report that Dasypus novencinctus now occurs in upland habitats throughout Florida including the entire IRL watershed. Only the Keys and parts of the Everglades and Big Cypress swamp remain free from established armadillo populations.

Age, Size, Lifespan: Individuals range in size from 60-80 cm total length and 3.6-7.7 kg with males tending to be larger than females. They are long-lived animals, surviving for as long as 20 years (Fox 1999, Schaefer and Hostetler 2003).

Reproduction: Dasypus novencinctus become reproductive shortly into their second year of life. Young born in the spring are capable of breeding in the early summer of the following year. The breeding season begins in July, and by the end of the month, approximately half of reproductive females have become pregnant (Davis and Schmidly 1997). Actual gestation lasts for five months, but delayed implantation (see below) results in a pregnancy that persists for approximately three additional months (Schaefer and Hostetler 2003).

Embryology: The embryology of Dasypus novencinctus is notable in several ways. Within a week of mating, the fertilized ovum forms a blastocyst and is passed to the uterus. There, development ceases and the blastocyst remains unattached in the uterus but nevertheless receives oxygen and nutrition from uterine secretions. Implantation is delayed until November, more than three months after fertilization. At the time of implantation, the blastocyst divides to form four distinct embryonic growth centers which attach to the uterus via a shared placenta. This phenomenon, termed specific polyembryony, results in litters typically consisting of identical quadruplets. After implantation, embryonic development then proceeds normally. A litter is born fully formed and with eyes open in approximately 4 months, usually in March. The young are highly precocial, walking within hours of birth and foraging with their mother within a few weeks. They likely wean within two months but may remain with their mother for a few months more (Davis and Schmidly 1997).

Delayed implantation may facilitate the success of pioneering armadillos in temperate climates. Rather than being born around the start of winter, delayed implantation allows young to be born in spring when survival odds are greatest (Davis and Schmidly 1997).

Temperature: The lack of a dense coat of hair and insulating body fat leaves armadillos, particularly younger animals, susceptible to the effects of climate (Nixon 1995). Seasonal behavioral thermoregulation is utilized to mediate body temperature. Individuals are most active in the cool evening hours during the summer months, but in the winter they shift their diel patterns such that they are most active in the heat of mid-afternoon. Nine-banded armadillos do not hibernate and they are not physiologically capable of surviving prolonged winters. (Davis and Schmidly 1997).

Along with rainfall (see below), temperature is the likely determinant of the northern limits of persistent, reproductive Dasypus novencinctus populations in North America. Nixon (1995) suggests that stable colonies fail to become established if the average January temperature is below -2°C.

Trophic Mode: Dasypus novencinctus is a rooting generalist forager that consumes primarily animal matter such as insects and other arthropods, earthworms, other invertebrates, small reptiles and amphibians. Plant matter and carrion are also eaten, and on occasion, birds and small mammals. The diet is broad and opportunistic; analysis of the stomach contents of more than 800 individuals revealed nearly 500 different dietary items, with animal matter comprising more than 90% of the diet by volume (Davis and Schmidly 1997).

Carrion is readily eaten when available, and dead carcasses of animals frequently are visited not only for the carrion present but also for the maggots and pupae of flies found on or near them.

Associated Species: Nine banded armadillos are solitary foragers with overlapping home ranges (McDonough, 1994). They are natural carriers of the prokaryote Mycobacterium leprae, the pathogen causing lepromatid leprosy. D. novemcinctus and humans are the only mammals known to naturally contract the disease Fox 1999). M. leprae is cultured in the foot pads of captive armadillos in leprosy research laboratories.

Historic natural range expansion of D. novemcinctus into the U.S. was first documented in 1854 with an occurrence in extreme southern Texas along the Rio Grande (Fox 1999). Natural range expansion in the subsequent 150 years is impressive, and has likely been facilitated by anthropogenic habitat alteration, including predator removal and livestock grazing activity. Average rates of range expansion vary from 4-10 km/year in the absence of physical or climatic barriers. Invasion is most rapid in riparian habitats parallel to water courses where armadillos are capable of traversing rivers both through breath-holding and walking across and by ingesting air to impart buoyancy. River and stream banks are probably important avenues for dispersal (Davis and Schmidly 1997).

Armadillos were first introduced to Florida in 1924; the present-day Florida population of D. novemcinctus is derived from several sources of introduction. The western population resulted from westward range expansion of the Texas population into the Florida Panhandle, and the Atlantic coast population resulted from several human-facilitated introductions (including escape from zoos and from the pet trade) from the 1920s to the 1970s. The Panhandle and peninsular populations expanded and eventually merged so D. novemcinctus can now be found in upland habitats nearly statewide (Greenbaum 2002, Schaefer and Hostetler 2003).

Potential to Compete With Natives: The rooting activities of to Dasypus novencinctus can damage below-ground portions of native vegetation through exposure to air, sunlight, and desiccation (Greenbaum 2002).

D. novemcinctus occasionally prey on the young of ground-nesting birds. Armadillos may also occasionally eat the eggs of quail, turkey, and other ground nesters, although gut analyses have demosntrated minimal importance of eggs in the diet (Davis and Schmidly 1997, Fox 1999). On the other hand, armadillos in Florida have been implicated in the destruction of sea turtle nests and the impacts may be significant. In some areas (e.g., Hobe Sound) where studies have been conducted, D. novemcinctus has raided as many as 14% of all sea turtle nests, accounting for as much as 95% of all nest raiding. As this behavior had not been documented until 1988, it may represent a newly-learned behavior of this highly adaptable invader (Engeman et al. 2002, Greenbaum 2002).

Possible Economic Consequences of Invasion: Some commercial crop damage is attributable to Dasypus novencinctus, although it is moderate compared to the damage caused by feral pigs. Armadillo burrowing activity can exacerbate erosion and has on occasion undermined structural foundations (Greenbaum 2002).

Although D. novemcinctus has been implicated as a vector for leprosy in humans, the species is probably of overall positive benefit with regard to the disease because it serves as an important leprosy research model. Armadillos are also used as medical research models in the fields of multiple births, organ transplants, birth defects, as well as typhus and trichinosis pathology (Fox 1999, Greenbaum 2002).

Armadillos may be of positive economic effect with regard to their imact on populations of insect pests (Davis and Schmidly, 1997). In Latin America and in small pockets within the southern U.S., armadillos are also utilized by humans as food (Fox 1999). 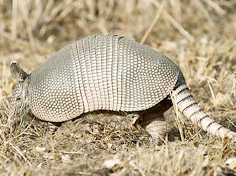