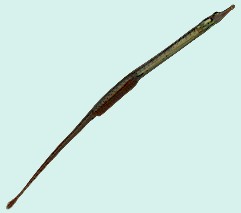 Species Description: The gulf pipefish, Syngnathus scovelli, is a slender, elongate fish that grows to 6 inches. It ranges from Florida and Louisiana through the Gulf of Mexico, Central and South America to Brazil (Targett 1984, Amos and Amos 1997). It typically inhabits shallow (< 6 m), densely vegetated, nearshore and estuarine waters. It is the only species among the 24 North American pipefishes that is known to enter freshwater areas (Amos and Amos 1997). S. scovelli exhibits sexual dimorphism, with females generally having deeper bodies and V-shaped silvery stripes along the trunk (Jones and Avise 1997). Body color is also different between the sexes, with females being an olive brown color, and males being much lighter. S. scovelli has no pelvic fins, but the elongate dorsal fin transverses 3 bony rings of dermal armor on the body and 5 on the tail. S scovelli is the most abundant pipefish in Florida and around the Gulf of Mexico (Brown 1972, Dawson 1982, Targett 1984).

Regional Occurrence: Syngnathus scovelli ranges from Brazil north through Central America and along the coastline of the Gulf of Mexico to Louisiana and Florida. The northern limit for this species was historically thought to be around the mouth of the St. John's River, in east central Florida (Dawson 1982, Targett 1984), however, an established breeding population was discovered on the northern Georgia coast by Targett in 1984.

S. scovelli is typically found in seagrass beds and drift algae habitats; however, the Georgia population of this species is not associated with seagrasses or drift algae, but instead utilizes soft bottom sediments (Targett 1984).

IRL Distribution: S. scovelli occurs lagoon-wide in the Indian River Lagoon, most commonly in seagrass habitats and among drift algae.

S. scovelli has a lifespan of approximately 3 years (Watley 1969).

Abundance: S. scovelli is the most abundant pipefish along the east coast of Florida, and the Gulf of Mexico (Brown 1972, Dawson 1982, Targett 1984).

Reproduction: Members of the families Syngnathidae and Hippocampidae (pipefishes and sea horses) exhibit atypical reproductive behavior and parental care. Maternal and paternal brooding roles are reversed in these groups, with females producing large telolecithal eggs that are fertilized as they are deposited into the male brood pouch (Azzarello 1991). Jones and Avise (1997) suggested that the mating system in this species tends toward genetic polyandry, with a high likelihood that S. scovelli females are able to split a single batch of eggs among several males. Males brood from 1 - 3 clutches of eggs per season (Watley 1969).

In the Georgia population of S. scovelli, the brood pouch of the largest male was found to contain 296 embryos (Targett 1984). This is a significantly higher number of embryos than had been previously observed in other populations, where between 150-175 embryos was more common (Brown 1972, Joseph 1957). Targett (1984) postulated the higher number of embryos was in part due to the larger overall body size of males in this population compared with those of other populations.

Embryology: S. scovelli is ovoviviparous, with role reversal of the usual brooding pattern. In the families Syngnathidae, as well as in the Hippocampidae, males incubate the large telolecithal eggs deposited by females. Eggs are fertilized upon deposition into the male brood pouch (Azzarello 1991). Embryos, which measure from 5-10 mm depending on maturation stage, are arranged lengthwise in the brood pouch, in parallel rows. Larval development lasts approximately 12 - 21 days depending on taxon. Newly hatched juveniles measure approximately 13 mm, and are capable of swimming, feeding and osmoregulating (Quast and Howe 1980, Azzarello 1991).

The brood pouches of both Syngnathus scovelli, the gulf pipefish, and Hippocampus erectus, the lined seahorse, are both anatomically and histologically similar; however, they appear to have physiologically distinctive roles. In both the seahorse and the pipefish, the brood pouch functions to buffer newly deposited eggs by bathing them in a solution that is isosmotic to fish blood. The ions in these isosmotic fluids are derived from the blood of the parent rather than from the external environment (Quast and Howe 1980).

During incubation, the sodium concentration in S. scovelli brood pouches is maintained at blood osmolality, while in Hippocampus brood pouches, the ion concentration is gradually shifted to be isosmotic to the external environment. Differences in habitat may account for this observation: Hippocampus species are principally marine, so the ability to adjust pouch fluid to match the generally stable marine environment may confer some selective advantage. In Syngnathus species, which are principally estuarine in nature, maintaining pouch fluids at blood osmolality, rather than subjecting developing embryos to widely varying changes in salinity, allows embryos to develop efficiently and perhaps decreases development time (Quast and Howe 1980).

Quast and Howe (1980) suggested that the osmotic role of the Syngnathus brood pouch may enhance the reproductive success of this species in freshwater habitats. Azzarello (1991) concluded that the brood pouch is non-essential for nutritional survival, and that it serves and important osmoregulatory function only in embryos smaller than 4 mm, the time period preceding the development of gills, excretory chloride cells and kidneys.

Temperature: S. scovelli is a eurythermal species and has been captured in Florida waters with temperatures ranging from 13 °C to 30 °C; however, temperature tolerance in this species is significantly lower than 13 °C, based on observations that in the Georgia population, estuarine water temperatures range from 5 - 7 °C over prolonged periods of time (Targett 1984).

Salinity: S. scovelli is euryhaline, and is the only species of the 24 pipefishes that regularly utilizes freshwater areas. It has been captured in waters with salinities ranging from 0 - 35 ppt (Targett 1984). Some species in this genus have been shown to breed in freshwater (Whatley 1969, Quast and Howe 1980).

Trophic Mode: S. scovelli is heterotrophic, and like the sea horses, has an elongate, tubular snout, and a small terminal mouth (Bergert and Wainwright 1997). These somewhat unusual structural elements have lead investigators to suggest the pipette-like feeding structure in Syngnathid fishes is one specialization for suction feeding (Branch 1966, Osse an Muller 1980, Muller 1987, Bergert and Wainwright 1997).

Motta et al. (1995) reported S. scovelli to have the narrowest diet of the 9 abundant fish species investigated in Tampa Bay, Florida. Larger individuals (>35 mm) of S. scovelli feed primarily on amphipods and cypris larvae (Motta et al. 1995) in seagrass beds, but it also feeds alternatively on copepods, isopods, gastropods, and juvenile shrimp (Kulczycki, Virnstein and Nelson 1981). This species has a low dietary overlap with other species, and a relatively low degree of herbivory (Motta et al. 1995). Seasonality also plays a role in the diet of S. scovelli. Livingston (1982) reported that S. scovelli is specialized to feed on amphipods during the winter and throughout the spring, but shifts its dietary preferences to shrimp in the fall months. Algae of various types are often found among gut contents; however, ingestion of algae is believed to be incidental, and results from feeding on the small crustaceans living in algal communities (Motta et al 1995).

Habitat: In the Indian River Lagoon, there was a positive correlation in capture rates of this species with the amount of drift biomass present, especially during the evening hours. (Kulczycki, Virnstein and Nelson 1981). However, Targett (1982) noted that S. scovelli does not have an absolute requirement for either seagrass or drift algal habitats, but can utilize soft bottomed habitats as well. S. scovelli does well in disturbed habitat areas (Watley 1969). 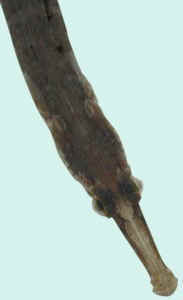