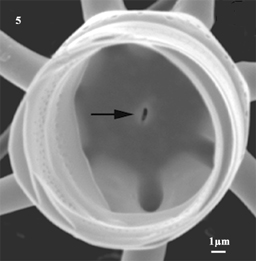 Species Description: Cells are united into chains, mostly 4-16 cells long, with a complex three dimensional structure.  Each cell is cylindrical, with a deep mantle (Fig.1, chain in girdle view, modified from Pavillard 1916).  The valve surface has a circular array of 6-8 setae that emerge from the valve in the axis of the chain, then turn perpendicularly to the chain axis and fuse with setae of the adjacent cell. At about one third the seta length, each fused seta bifurcates and bends toward the posterior end of the chain.

Cell diameters vary from about 6-24µm, with a pervalvar axis of 25-50µm.  There are numerous small discoid chloroplasts.  This is a tropical species, more common in neritic areas, but also oceanic in Atlantic, Pacific, and Indian Oceans. In the IRL, it was found rarely in the Jupiter Inlet area in August 2008 and in the Haulover Canal in October 2010. 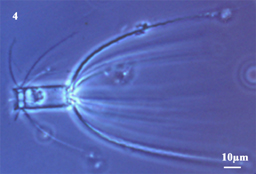 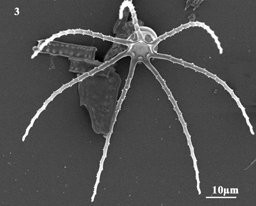 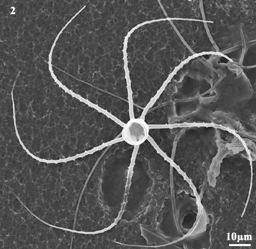