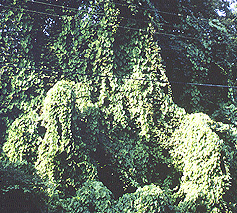 Species Description: Air potato, Dioscorea bulbifera, is an invasive plant not native to Florida but whose present-day distribution includes most of the state. It is a vigorously twining, long-stemmed herbaceous vine which may arise from an underground tuber, although often tubers are inconspicuous or absent. The stems are round to slightly angled in cross section and they twine coutner-clockwise. Conspicuous aerial tubers (called bulbils) are pale, round to globose in shape, up to 13 cm wide and are formed in leaf axils. It is these bulbils that give D. bulbifera the common name "air potato."

The leaves are attractive, alternate, broadly heart-shaped, up to 20 cm long and attached by long petioles. They are divided longitudinally into lobes by prominent arching veins all radiating out from a single point of origin where the petiole attaches to the leaf. Flowers rarely occur in D. bulbifera; where occurring, they are small, pale green and fragrant, arising from leaf axils. The fruit is a capsule and the seeds partially winged (Langland and Burks 1998, Langeland 2001).

Potentially Misidentified Species: Florida is foster home to another invasive non-native Dioscorea, the water yam (= winged yam) Dioscorea alata. D. bulbifera and D. alata are superficially similar in appearance but distinguishing the two is straightforward. D. alata has a stem that is squarish in cross-section with wide ridges or wings, whereas the D. bulbifera stem is round in cross-section. Leaves are opposite in D. alata and alternate in D. bulbifera. The underground tubers of D. alata are also enormous, some weighing more than 45 kg, whereas the underground tubers D. bulbifera are small and may even be absent altogether (Langeland and Burks 1998).

Non-native Dioscorea species in Florida may also be mistaken for either of two native wild yams, D. floridana and D. quarternata. The native plants are only infrequently encountered in north and west Florida hammocks and floodplains. Where overlap with the exotic species occurs, the lack of aerial tubers in the native species can aid in identification (Langeland and Burks 1998).

Regional Occurrence: The broad native distribution of Dioscorea bulbifera includes much of Asia and Africa and the plant has been widely introduced to new tropical and subtropical areas including the Americas (Coursey 1967, Schultz 1993). In the U.S., D. bulbifera now occurs in Florida, Mississippi, Louisiana, Texas and Hawaii. D. bulbifera also occurs in Puerto Rico. In Florida, air potato now occurs throughout almost the entire peninsula.

Age, Size, Lifespan: The stems of Dioscorea bulbifera can attain lengths of 20 m and can grow as much as 20 cm/day in the summer.

Abundance: Statewide infestation by Dioscorea bulbifera prompted the Florida Exotic Pest Plant Council to include the species in its list of the top 10 Most Widespread Invasive Plants in Florida, i.e., nonindigenous plants with the most county occurrence records.

Reproduction: Dioscorea bulbifera can propagate through both sexual and asexual means, In Florida, flowering is rare and sexual reproduction is therefore only a minor contributor to propagation of the species.

Dioscorea species are dioecious, with male and female flowers occurring in separate plants. Flowering is uncommon in the Florida populations but the flowering that does occur takes place in summer. Pollination is dependent on insects, commonly thrips, and the seeds are wind dispersed (Langeland and Burks 1998, Hammer 1998).

The chief means of reproduction in D. bulbifera is asexual and is dependent on vegetative growth from underground tubers and above-ground bulbils. Tubers and bulbils generally sprout in the spring and the new shoots often climb the dead stems of the previous year to reach the tree canopy. In the summer (June-July), a large number of new bulbils are produced which fall to the ground in late August. By the time seasonal stem die-back begins around October, a single vine may have put out as many as 200 bulbils.

Embryology: In areas where they are produced, Dioscorea bulbifera seeds are wind-dispersed (Hammer, 1998). Even where flowering occurs more regularly, sexual reproduction via seed is still likely of secondary importance. Seeds of D. bulbifera and other members of the genus are believed to undergo an obligate dormancy period of several months before they germinate. This strategy is probbably an evolutionary adaptation to ensure the presence of viable seeds in the seed bank when breaks in forest canopy cover occur. A laboratory germination regime for viable, non-dormant D. bulbifera seeds indicates that germination occurs in approximately 21 days at 30°C (Ellis et al. 1985).

Bulbils can last a year or more on the ground and still sprout, and soil contact in not necessary for sprouting. They also float and may be dispersed by flood waters and appear to be little impacted by feeding from raccoons, feral pigs, and other animals (Coursey 1967, Morisawa, 1999).

Temperature: Cold intolerance appears to be the key factor limiting expansion of the U.S. introduced range of Dioscorea bulbifera beyond the tropical/subtropical to warm-temperate areas it now occurs in.

Salinity: Air potato is not salt tolerant and is an unsuccessful invader of marine and estuarine shorelines (Morisawa 1999).

Associated Species: Dioscorea bulbifera occurs in a variety of natural and disturbed habitats. It is an aggressive invader that will overgrow understory community associates and also canopy species if canopy gaps allow it to gain a foothold (Hammer 1998, Horvitz et al. 1998).

Invasion History: The plant was first introduced to the New World during the slave trade, and subsequently transported to Florida in 1905 as a USDA sample sent for horticultural examination (Coursey 1967, Schultz 1993). The Florida horticulturist who received the samples quickly saw the potential danger this aggressive potential invader posed for the state.

Vigorous asexual reproduction via bulbils has facilitated the continued spread of this invasive vine throughout most of the state. Martinez (1993) reported that Dioscorea bulbifera had become "rampant on undeveloped land" around Tampa. By 1996, the plant had been reported from natural areas in 23 Florida counties (Langeland and Burks 1998). As of 2007, the Florida Exotic Pest Plant Council Early Detection and Mapping System indicates D. bulbifera now occurs in at least 46 (of 67) Florida counties.

In 1999, D. bulbifera was added to the Florida Department of Agriculture and Consumer Services Noxious Weed List, banning introduction, possession, transport, or release of the species in Florida without a permit (Langeland 2001).

Potential to Compete With Natives: Long Dioscorea bulbifera vines can blanket forest canopies, shading out understory species and eventually overgrowing and choking canopy species as well. The resulting loss of native plant diversity, combined with the relative unpalatability of the tubers and bulbils typically diminishes the habitat value for faunal community associates.

The species is adapted to take advantage of stochastic opportunities ranging from treefalls that open up forest canopy to hurricanes that readily disperse the small, buoyant bulbils. Horvitz et al. (1998) report that air potato quickly became a dominant species in the south Florida hammock community canopy in the wake of Hurricane Andrew.

Possible Economic Consequences of Invasion: Dioscorea bulbifera is listed as a Category I invasive exotic plant in Florida, indicating that the species is currently altering native plant communities by displacing native species and changing community structures or ecological functions. Asexual propagation by means of bulbils that drop off of parent vines to the ground in abundance ensure that eradication of the plant is exceedingly difficult once it has invaded an area.

In many parts of the world the tubers and bulbils of D. bulbifera are used as food and the plant is cultivated as an agricultural crop. The plant has also long been used as a folk medicine including use as an analgesic, aphrodisiac, diuretic, and a rejuvenative tonic. The steroid diosgenin, an active component of birth control pills, is extracted from the plant as is the anti-fungal compound dihydrorodioscorine (Fox undated).

Coursey, D.G. 1967. Yams: an account of the nature, origins, cultivation, and utilization of the useful members of Dioscoraceae. London: Longmans, Green and Co. Ltd. 230 pp.

Morton J.F. 1976. Pestiferous Spread of Many Ornamental and Fruit Species in South Florida. Proceedings of the Florida State Horticulture Society 89:348-353. 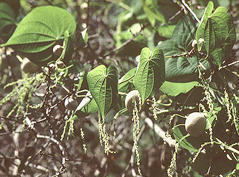