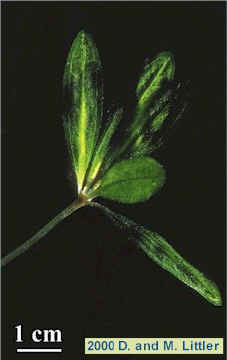 Regional Occurrence: Halophila engelmannii occurs in Florida, the Bahamas, Texas and the West Indies (Eiseman 1980). Along the northwestern shelf of Cuba, Halophila engelmannii was found at depths up to 14.4 meters, but accounted for only 0.2% composition of the seagrass assemblage in the area (Buesa 1975).

IRL Distribution: Halophila engelmannii is patchily distributed throughout the Indian River Lagoon (IRL), but less common in the south of the lagoon and usually in deep water (Virnstein 1995). In 1980, Eiseman reported that H. engelmannii was found only in the northern part of the Indian River Lagoon, near Haulover Canal, where it grows under the cover of a mixed bed of Syringodium filiforme and Halodule wrightii.  Eiseman speculated that its distribution was probably more widespread than was observed.

Distribution, biodiversity, productivity and ecological significance of seagrasses in the Indian River Lagoon are summarized by Dawes et al (1995). Seven species of seagrass, including all 6 species occurring throughout the tropical western hemisphere, as well as Halophila johnsonii, known only from coastal lagoons of eastern Florida, occur in the IRL. Halodule wrightii is the most common. Ruppia maritima is the least common and is found in the most shallow areas of the lagoon. Syringodium filiforme can be locally more abundant than H. wrightii. Thalassia testudinum occurs in the southern portion of the IRL, from Sebastian Inlet south. Halophila decipiens, Halophila engelmannii and Halophila johnsonii can form mixed or monotypic beds with other species. Because of their abundance in deeper water and high productivity, the distribution and ecological significance of the 3 Halophila species may have previously been underestimated.

Distributional Changes: Changes in seagrass distribution and diversity patterns in the Indian River Lagoon from 1940 to 1992 are discussed by Fletcher and Fletcher (1995). These authors estimate that seagrass abundance was 11% less in 1992 than in the 1970's, and 16% less than in 1986 for the entire Indian River Lagoon system. Decreases in abundance occurred particularly north of Vero Beach into the Melbourne area. In this region of the lagoon, it was also estimated that maximum depth of seagrass distribution has decreased by as much as 50% from 1943 to 1992. Alteration of such factors as water clarity, salinity and temperature could affect the diversity and balance of seagrasses in the Indian River Lagoon system and should be considered when developing management strategies for this resource (Fletcher & Fletcher 1995).

Age, Size, Lifespan: Growth of Halophila engelmannii, Ruppia maritima, Halodule wrightii, Syringodium filiforme and Thalassia testudinum was investigated in the laboratory at various light intensities. Optimum growth for all five species was obtained at light intensities of 200 - 450 foot-candles. At light intensities above or below this range, growth was much slower for all species (Koch et al 1974).

A study in the northern section of the Indian River Lagoon, FL showed that the seagrass communities composed of Halophila engelmannii, Halodule wrightii and Syringodium filiforme responded to a number of interrelated physical and biological variables some of which varied seasonally (temperature, light, epiphytes). Other variables such as sediment deposition and resuspension vary continuously. Vegetative growth of all three species occurred in the spring and to a lesser extent during the fall (Rice et al 1983).

Abundance: H. engelmannii is among the least common of the seagrasses in the IRL. Its highest abundance occurs in the northern area of the lagoon system.

Reproduction: Seasonality of both growth and biomass is exhibited by all species of seagrass in the IRL, being maximum during April to May, and June to July respectively. The significance of seagrass beds as habitat, nursery and food source for ecologically and economically important fauna and flora, as well as various management strategies for seagrass beds of the IRL are discussed (Dawes et al 1995).

Water temperature, moreso than photoperiod, appears to be more influential in controlling floral development as well as subsequent flower density and seed production in seagrasses. Laboratory experiments showing flowering induction under continuous light suggests that photoperiod probably plays a limited role in sexual reproduction (Moffler & Durako 1987). McMillan (1982) concluded that temperature was more important in regulating flowering in Halophila engelmannii. Temperatures of 22.0 - 27.5°C and a photoperiod of more than 12 hours was needed for sexual reproduction to occur in Halophila engelmannii.

Temperature: Under laboratory conditions, temperatures between 22.0 - 27.5°C and a photoperiod of more than 12 hours was required for sexual reproduction to occur in Halophila engelmannii.

Salinity: In a salinity tolerance study of seagrasses occurring in Redfish Bay, Texas, "some" Halophila were able to withstand a salinity of 74 ppt without chlorophyll levels being affected (McMillan & Moseley 1967). In this study, the reoccurrence of Halophila from fragments that were thought to be dead, suggested that Halophila had a higher salinity tolerance than Syringodium.

Habitat: Halophilia engelmannii is generally found to be more common in northern areas of the IRL system, and is found in somewhat deeper water than other seagrasses.

Associated Species: For an extensive treatment of seagrass community components and structure, including associated flora and fauna, see Zieman (1982). The significance of seagrass beds as habitat, nursery and food source for ecologically and economically important fauna and flora as well as various management strategies for IRL seagrass beds are discussed by Dawes et al (1995). Virnstein (1995) suggested the "overlap vs. gap hypothesis" to explain the unexpectedly high (e.g., fish) or low (e.g., amphipods) diversity of certain taxa associated with seagrass beds as habitat. In a highly variable environment such as the Indian River Lagoon, diversity of a particular taxa is related to its dispersal capabilities. For example, amphipods, lacking a planktonic phase, have limited recruitment and dispersal capabilities, whereas highly mobile taxa such as fish (which have a planktonic phase) would tend to have overlapping species ranges and hence higher diversity (Virnstein 1995).

Direct grazing on Florida seagrasses is limited to a number of species, e.g., sea turtles, parrotfish, surgeonfish, sea urchins and perhaps pinfish. Other grazers e.g., the queen conch, scrape the epiphytic algae on the seagrass leaves (Zieman 1982). At least 113 epiphytes and up to 120 macroalgal species have been identified from Florida's seagrass blades and communities respectively (Dawes1987). 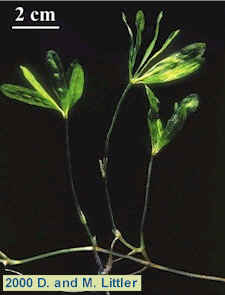