Species Description: In a recent publication, definition of the genus Haslea was expanded significantly (Sterrenburg et al. 2015). Haslea species are characterized by a sandwich-structured valve consisting of an internal grate-like basal layer and an external tegumental layer perforated by continuous longitudinal fissures. These two layers are shored by longitudinal “bulkheads” (saepes) that are perforated so that they form fence-like rows of columns. The valve contour of many of the 30+ species is fusiform or lanceolate. In Sterrenburg et al. (2015) H. amicorum is defined in part as: valve rather broadly lanceolate, 32−39µm long, 7.5–8.5µm wide. Striae are transverse radiate, circa 11 in 10µm; longitudinal striae strongly curved, circa 22 in 10µm; expanded central areas visible in SEM, and central raphe endings straight. The holotype and isotype of H. amicorum are presented here as Figs. 1 & 2. In Fig. 1 (adapted from holotype, light microscope by Herwig in Sterrenburg et al. 2015, figure 65) the basal layer is clearly defined. The isotype (Fig. 2, SEM of exterior, modified from Sterrenburg et al. 2015, figure 67) shows the slightly expanded central area, the interrupted proximal longitudinal fissures, and the straight raphe endings

The IRL has at least two Haslea species that are very similar to H. amicorum but differ in ways whose taxonomic significance is uncertain. The first species was found in the Mosquito Lagoon and differs from H. amicorum in that: it lacks an expanded central area, the longitudinal striae are not interrupted (Fig. 3, valve exterior SEM), the central raphe fissures are slightly deflected to the same side (Fig 4, detail of Fig. 3, central raphe fissures deflected to the same side [arrows], sample ML104), and the size (14.7 X 2.9µm) is too small for H. amicorum. The second species was found in the northern IRL, is similar in size and apical raphe endings to H. amicorum, but differs in the same ways as the Mosquito Lagoon example (Fig. 5, external (lower) and internal (upper) views of valves of the same cell, SEM; Fig. 6, detail of median external valve from Fig. 5, with central raphe fissures deflected to the same side [arrows], sample B12S15). Because the range of morphological variability within the recently described H. amicorum is unknown, these variants are included as belonging to that taxon with the caution that they may eventually be described as novel species.

The species is known only from Birdrock, LaJolla, CA, and possibly the IRL. 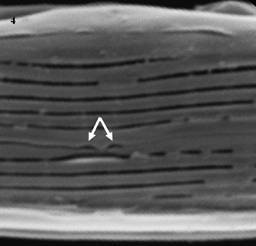