Species Description: Valves of this species are narrowly lanceolate with acute or subacute apices (Fig. 1, living cell, brightfield; Fig. 2, partly covered valve, SEM). As with other Haslea species, the outer (tegumental) layer of the cell wall consists of longitudinal fissures (Fig. 3, central area of valve exterior, SEM), while the inner (basal) layer (Fig. 4, central area of valve interior, detail of Fig. 2 SEM) is composed of a grate-like layer of quadrate structures arranged in transverse and longitudinal rows (Sterrenburg et al. 2015). The central area is not expanded (Fig. 3, Fig. 4). The central raphe ends are very slightly deflected to the same side on the exterior (Fig. 3) but do not overlap (Fig. 4, interior). At the valve apex, a crescent of microforamina surrounds the straight raphe terminus (Fig. 5, detail of Fig. 2). Distal to the raphe ending, a slightly raised ridge runs parallel to the raphe (Fig. 5)

Cells are normally 60-120µm long and 6-12µm wide, though these ranges are extended in culture (Gastineau 2011). The grate-like structures number about 35-40 in 10µm; at or below the resolution limit of optical microscopes. Of particular interest is the production of a water soluble blue pigment with antioxidant, antibiotic, and allelopathic activity, called ‘marennine’ (Gastineau et al. 2014). Marennine, also found in other Haslea species, is responsible for ‘greening’ of oyster tissue in the French aquaculture industry, affecting their marketability. Although globally distributed and widespread in the IRL system, H. ostrearia does not appear to be abundant, and ‘greening’ of oysters has not been observed locally. 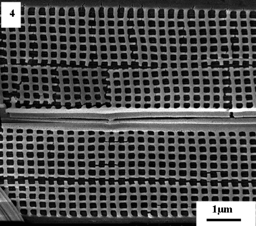 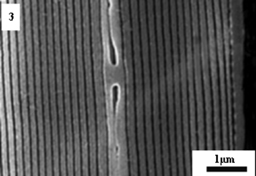