Species Description: The most commonly reported species of this genus is Paralia sulcata. Many of the novel species described in this genus are distinguished by ultrastructural details and/or molecular criteria. Accordingly, there have been about a dozen extant species described. Many of the extant species appear rather similar in living cells (Fig. 1, living cells, brightfield): tightly appressed cells in a linear chain, with few cingular bands, heavily siliceous cell walls, and numerous chloroplasts.

In addition to P. sulcata, the IRL contains another species that is close to, but not exactly like, P. allisonii as described in MacGillivaray & Kaczmarska (2012). This species differs from the original description in that it is slightly larger (to 15.5µm, Fig. 2, intercalary valve, SEM), but corresponds in general morphology, including girdle view (Fig. 3, SEM), internal striae (Fig. 4, SEM) and number of pores in the interstriae (Fig. 5, SEM).

There may be several unidentified species of Paralia in the IRL system that cannot be identified to species without electron microscopy, so the distribution of this species in time and space is unknown. P. allisonii has been reported from Jamaica and Panama (MacGillivary & Kaczmarska 2012), and these authors also report a "P. longispina-like" species from the Bahamas and Florida's west coast. At least one additional species has been seen resembling P. sulcata, but its morphology in SEM differs from that described by Crawford (1979). 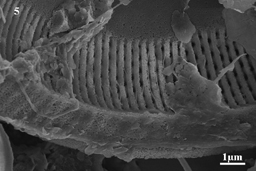 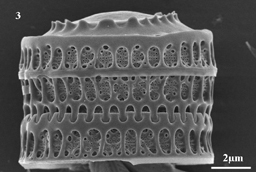 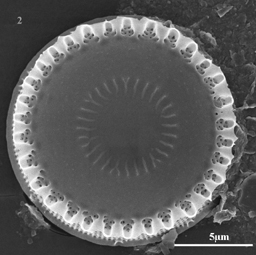