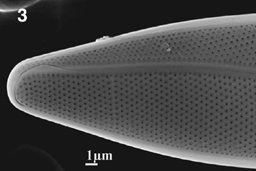 Species Description: Valves only slightly or not sigmoid, broadly lancolate with slightly rostrate apices. The raphe is somewhat sigmoid (Fig. 1, entire valve exterior, SEM) and sharply hooked at the apices (Fig. 3, detail of Fig. 1), with the central raphe endings highly variable, according to Sterrenburg (2001), but seen here somewhat deflected to opposite margins and not overlapping (Fig. 2, detail of Fig. 1). In contrast to most species of Pleurosigma, the external foramina of the areolae are circular rather than slit-like (Fig. 2) 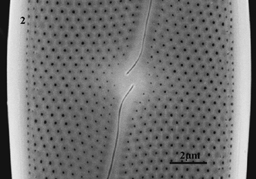