Species Description: Valves are narrowly lanceolate with acute apices (Fig. 1, SEM), and lacking the usual sigmoid shape of Pleurosigma species. The raphe is straight, sometimes becoming slightly excentric near the apices; in the center it is somewhat undulate, and the ends bend slightly to the same side (Fig. 2, valve center, SEM). At the apical terminus (Fig. 3, SEM), the raphe is hooked and is accompanied by a calcar (an accessory fissure; arrowhead in Fig. 3) and a small apical pore (Fig. 3, black arrow). On the valve interior, the raphe endings are straight and subtended on both sides by short curved siliceous bars (Fig. 4, SEM). The valves seen are 212-251µm in length and 14.9-18.1µm in width. Transverse striae are 25-26 in 10µm; diagonal striae are 21-22 in 10µm, crossing at a 60-62 degree angle. Excepting size range and the apical pore, these characteristics correspond well with the isolectotype material examined by Sar et al. (2012). Hustedt (1955) notes that the cells he found in North Carolina corresponded to Grunow’s P. intermedium var. mauritania, distinguished by “more slender valves’ (such as those in the IRL), but he suggested that these would be better regarded as formae rather than a variety. Living cells are highly motile and have vermiform chloroplasts (Fig. 5, living cell, phase contrast). The species has a worldwide distribution in warmer waters; it was fairly common throughout the IRL system, though Navarro (1982) found it rarely. 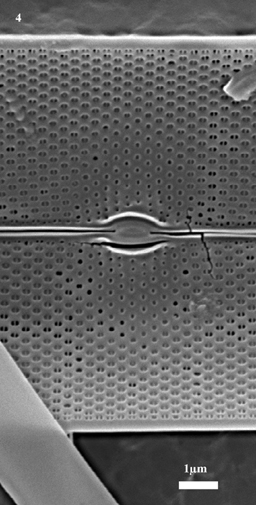 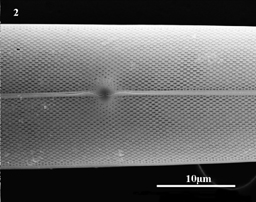