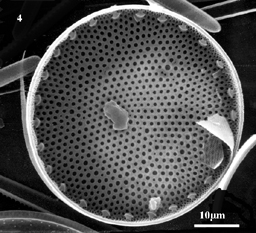 Species Description: Cells of R. tesselata are solitary and discoid, coin-shaped in girdle view, with flat valves that are circular (Fig. 1, phase contrast; Fig. 2, brightfield) to slightly elliptical or ovate (Fig. 3, phase contrast) in shape. A prominent pseudonodulus is present on the valve surface, separated from the valve margin by 1-3 areolae (Fig. 1, arrow). Rimoportulae (labiate processes) occur in a continuous single ring around the junction of the valve face and valve mantle (Fig. 4, SEM). The rimoportulae are slightly oblique to the margin and coupled with curved ridges on the external valve face-mantle junction, often giving the cells a scalloped appearance (Fig. 1, 2). These ridges increase in size away from the pseudonodulus and are largest on the opposite rim (Fig 1, 2). The areolae are arranged in a radial pattern near the margin, but become abruptly linear in a major part of the central area (Fig. 1-3).

Valve diameters in the literature are 18-97µm, with 5-10 areolae in 10µm on the valve face and 8-13 in 10µm on the mantle. Rimoportulae number 1-3 in 10µm, with 4-8 areolae between adjacent rimoportulae. Dimensions and morphological variation may be considerably different between warm water and cold water forms (Lee & Lee 1990). Further observations on this species are found in Fryxell et al. (1986) and Hasle (1976).

Roperia can be distinguished from Coscinodiscus by its pseudonodulus, from Actinocyclus by the areolar pattern, and from Eupodiscus, which has two or more ocelli (rather than a pseudonodulus). The only valid species appears to be R. tesselata, since R. excentrica (Chin et al. 1980) falls within the morphological range of R. tesselata and was invalidly published.

The species has a very wide distribution. It is found in colder north and south areas of both Pacific and Atlantic Oceans, and throughout the tropics in oceanic and coastal waters. It appears in the temperature range 15-30 °C, and mostly at salinities above 32 PSU. Its presence in the St. Lucie Inlet probably represents inflowing coastal water, and its morphology is consistent with warm water forms. 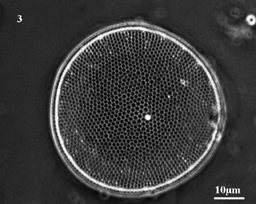 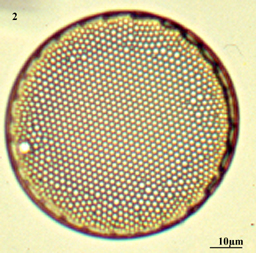 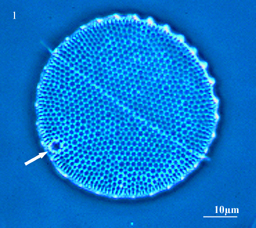