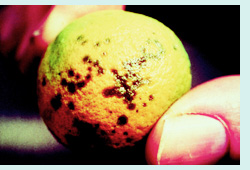 Species Description: Citrus canker is a disease of cultivated citrus plants caused by nonindigenous bacterial pathogen Xanthomonas axonopodis pv. citri ('Xac'). Genus Xanthomonas consists of gram-negative, rod-shaped, polarly-flagellated bacteria whose members commonly occur as serious plant pathogens. Colonies are typically yellow in color due to the presence of a particular carotenoid pigment identified through relatively simple screening procedures and generally indicative of the genus (Starr and Stephens 1964). The pathogen expresses itself in infected citrus plants as brown, raised lesions on leaves and fruits with oily, water soaked and necrotic margins and a surrounding yellow halo. Affected areas of leaves may fall out in time, leaving holes. Microscopic examination of tissue sliced from the edges of active lesions on infected plants reveals streaming masses of rod-shaped bacteria (DACS 2002, ISSG).

Potentially Misidentified Species: There are multiple strains or pathotypes of the Xanthomonas spp. citrus canker bacterium. The most devastating of these is X. axonopodis pv. citri pathotype A, also known as Asiatic citrus canker. Also present in Florida are pathotypes B and C of X. aurantifolia pv. aurantifolia and at least two pathotypes of the congeneric bacterium X. campestris, responsible for bacterial leaf spot disease in citrus (Integrated Plant Genetics Inc. undated, ISSG). An outbreak of bacterial leaf spot disease in Florida in 1984 was previously misidentified as a citrus canker outbreak (ISSG). Recent molecular studies have suggested that X. axonopodis pv. citri should be reinstated to species status as X. citri. Florida citrus trees are now additionally under threat from citrus greening disease (also called huanglongbing, HLB, or yellow dragon disease), also a bacterial disease, that is believed to be capable of worse damage than canker. The responsible pathogen (unnamed as of 2007) is also not native to the U.S., and is considered by some to be the most serious worldwide citrus disease. Citrus greening disease was first reported from Florida in 2005. Disease symptoms are dissimilar to those of citrus canker, and include yellowing of shoots, leaf mottling or discoloration, and the production of lopsided poor-quality fruit.

Regional Occurrence: Citrus canker is likely native to southeast Asia and India, but has now spread worldwide into to warm, moist, citrus-growing coastal regions. The pathogen is now also established in Australia, Japan, the Middle East, Africa, Papua New Guinea and elsewhere in the Pacific, and the Americas (Gotwald et al. 2002, Kumar et al. 2004). In Florida, citrus canker has been reported from 24 counties as of January 2006. Recent northward spread of citrus canker into central Florida is believed to be a consequence of the hurricanes of 2004 and 2005 (Gaskalla 2006).

Abundance: Citrus canker was known to occur in 24 Florida counties as of January 2006.

Reproduction: Reproduction in genus Xanthomonas is similar to that of other bacteria, occurring through asexual binary fission in which each dividing clonal daughter cell receives an identical copy of the parental genome (Campbell et al. 1999).

Temperature: Xanthomonas axonopodis pv.citri thrives in subtropical regions of the world where citrus grows. Its invasive range, like the range of its various host species, is temperature limited, although the first reported incidence of the pathogen in Florida in 1910 was reported in the northern part of the state from near the Florida-Georgia border.

Trophic Mode: Xanthomonas axonopodis pv.citri is a heterotrophic bacterium that derives nutrition from the tissues of the plants it infects.

Associated Species: The larval form of a moth known as the Asian citrus leaf miner (Phyllocnistis citrella), non-native in Florida, facilitates spread of the citrus canker bacterium through its leaf-burrowing activities which expose disease-causing X. axonopodis pv.citri to transport through wind and rain.

Invasion History: Citrus canker was first identified in Florida approximately a century ago in 1910. Aggressive measures were taken to combat the disease and it was declared eradicated from the state in 1933. After an apparent absence of more than 50 years, citrus canker was again detected in Florida, in Manatee County in 1986. Once again, steps were taken to contain the disease and it was in 1994 again declared eradicated (Gaskalla 2006).

Canker-infected plants were in 1995 again reported from south Florida, in the vicinity of Miami International Airport. An aggressive USDA-administered eradication program was established but proved unsuccessful. The Florida 2004 and 2005 hurricanes facilitated the spread of citrus canker in the state to the point that eradication was no longer deemed possible. Federal funds for eradication were withdrawn in 2006 and the response strategy shifted to a management and containment plan (Gaskalla 2006).

Although individual plant quarantines have been eliminated, a USDA statewide quarantine remains in effect which places restrictions on the transport of harvested citrus or plant stocks out of the state. Transport of material to other citrus-producing states is prohibited. Prior to the 2006 lifting of individual quarantines, more than 600,000 ha of Florida land had been placed under enforced quarantine (FDOACS undated, Gaskalla 2006).

The citrus canker pathogen was first reported in Palm Beach County in 1999 and in Martin County from a commercial citrus grove in 2001. Citrus canker in the IRL region north of Martin County largely did not occur until after the 2004 hurricanes. The post-hurricane appearance of canker was first reported from St. Lucie County in December 2004, from a sentinel survey site in Port St. Lucie. The first reports from Indian River County were post-hurricanes, December 2004, in a grove near the Indian River/St. Lucie county line. Confirmed reports of the disease in Brevard County as of 2005 were confined to a handful of residential sites.

The citrus canker pathogen has been spread through the transport of fruit, plants, and equipment, and dispersal appears to be greatly facilitated by wind and rain. Overhead irrigation systems may also facilitate movement of citrus canker as does the leaf-burrowing activity of larval P. citrella.

Potential to Compete with Natives: The biological impact of X. axonopodis pv. citri is primarily as a plant pathogen; competition with native microbial species remains unreported.

Possible Economic Consequences of Invasion: X. axonopodis pv. citri is a serious disease agent of citrus crops in Florida and elsewhere. Infected trees exhibit a gradual decline in health and fruit production until they eventually succumb to the disease. As of January 2006, more than 15 million commercial trees in groves and nurseries had been destroyed in Florida as a result of efforts to eradicate citrus canker. Nearly 1 million residential trees were destroyed as well (Gaskalla 2006).

Transport of live citrus plants in and out of Florida is currently prohibited. Homeowners who wish to plant citrus trees must purchase certified symptom-free citrus plants through nurseries registered with the state (FDOACS 2006). 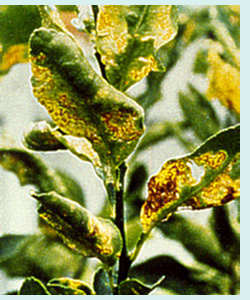