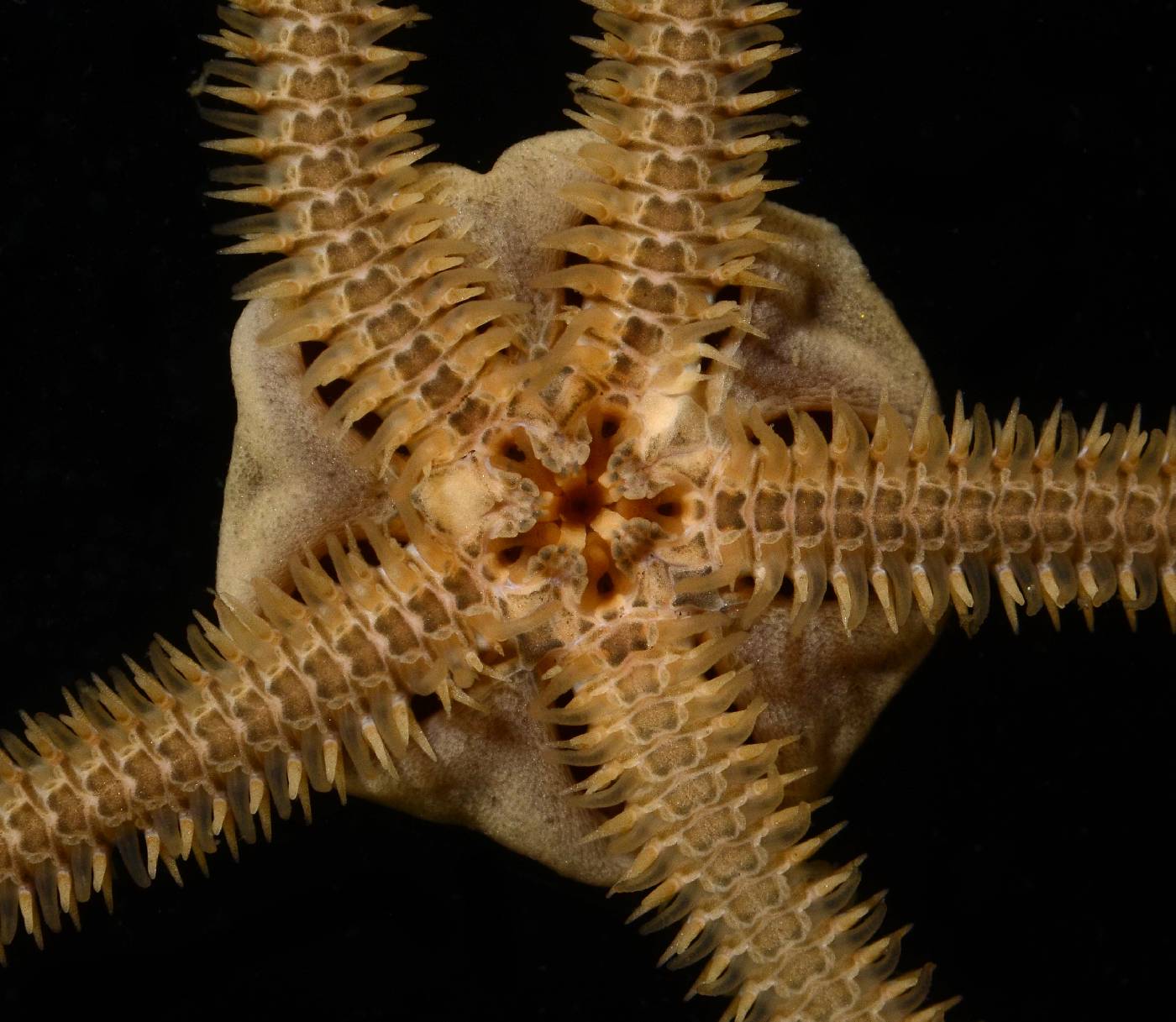 Species Description: Fine scales cover the disk of Amphiodia pulchella, and the pairs of radial shields on the dorsal surface of the disk are closely joined (Hendler et al. 1995). Primary plates are prominent on the disks of smaller specimens, but are usually absent on larger individuals. The middle arm spine is dorsoventrally flattened, with a truncate, echinulate tip. The tips of the other two spines are bluntly rounded. Both distal pairs of oral papillae are elongate with blunt tips, and each of the tube feet have a bulbous tip.

The color of the disk can vary from gray to brownish gray, with reddish or purplish gray marking the primary plates and other large scales. The radial shields are dark near the center of the disk with a pale distal tip. Reddish brown pigmentation of the stomach may be visible through the body wall. The color of the arms is variable, often pale gray, blotched or having dark gray, brown or reddish brown bands. A dusky internal spot is usually visible on the arm spines, and a light mid-dorsal arm stripe is sometimes evident (Thomas 1962), which is likely from the visibility of the vertebrae through the thin dorsal arm plates (Hendler et al. 1995).

Potentially Misidentified Species: In some parts of its range, A. pulchella may be confused with the similar but slightly larger A. atra.  However, A. atra is reportedly absent in southern Florida and the Florida Keys (Hendler et al. 1995). Furthermore, A. pulchella is easily distinguished from A. atra and other shallow-water Amphiodia and Amphipholis species by the presence of only a single tentacle scale.

Habitat & Regional Occurrence: A. pulchella occupies shallow burrows in soft sediments at depths from 1 to 71 m, often in back reef areas along with seagrasses and sponges, or among coral colonies and clumps of algae such as Halimeda (Hendler et al. 1995). Burrowing individuals will frequently extend two to four arms across the sediment surface, while the disk and other arms remain inside the burrow.

The range of A. pulchella extends along both coasts of Florida, throughout the Florida Keys and Dry Tortugas, throughout the Gulf of Mexico, Cuba, Jamaica, Puerto Rico, the Windward and Leeward Islands of the Lesser Antilles, Tobago, Mexico, Belize, Brazil and Argentina (Hendler et al. 1995).

IRL Distribution: The distribution of A. pulchella within the IRL remains undocumented. However, this cryptic species likely occurs in soft sediments and seagrass beds throughout the IRL, especially in the southern lagoon.

Size: A. pulchella is one of several species of small brittle stars found in and around the IRL. The diameter of the central disk rarely exceeds 5 mm, and the five slender arms are only 40-50 mm long (Hendler et al. 1995).

Reproduction & Embryology: The small oocytes of A. pulchella measure only 0.65 mm in diameter, implying that the developing larvae have low yolk reserves. Therefore, A. pulchella is believed to have a planktonic, feeding larval stage (Hendler & Littman 1986).

Associated Species: A. pulchella has been collected along with several other brittle star species in sand, seagrass beds and mats of filamentous algae at Looe Key, Florida (Hendler et al. 1995). 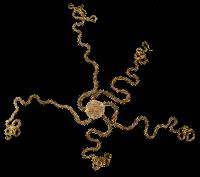 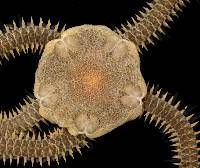 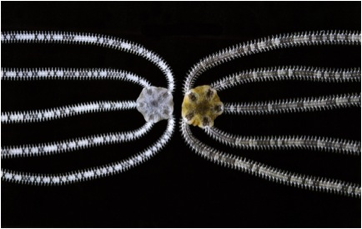