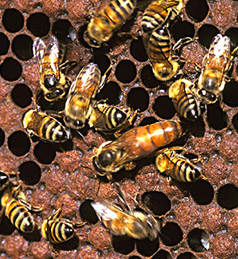 Species Description: Africanized honeybees (AHB), Apis mellifera scutellata, are the hybrid offspring resulting from the crossing of domestic or naturalized honeybees (Apis mellifera) of European descent and descendants of the more aggressive African honeybee strain, A. m. scutellata, that was intentionally brought to the New world for cultivation and later accidentally released to the environment. They are sometimes dramatically referred to as "killer bees."

African honeybees have bodies that are covered in fuzz with an abdomen that is ringed with black stripes. They are very similar in appearance to European honeybees, although they are slightly smaller (Kaplan 2004, ISSG 2005).

Potentially Misidentified Species: It is exceedingly difficult for a non-entomologist to positively distinguish Africanized honeybees from common European honeybees. Aside from genetic analysis, comparison of as many as twenty different body measurements remains the only way to distinguish the strains with certainty (Kaplan 2004).

Apis mellifera scutellata are most easily recognized for their behavioral dissimilarities to European honeybees. They respond quickly and aggressively to disturbance, defend hives more intensely than European honeybees and will chase the source of the disturbance for a mile or more (Sanford and Hall 2005).

Regional Occurrence: The native range of Apis mellifera scutellata is the eastern and southern portions of Africa. Introduction to the New World began with the intentional importation and subsequent accidental release in Brazil followed, in turn, by spread of the strain through Central and South America and into the southern U.S. (Sanford and Hall 2005).

IRL Distribution: As of March 2006, Africanized honeybees had been reported from 14 Florida counties, including the southern three counties (St. Lucie, Martin, Palm Beach) of the IRL watershed.

Age, Size, Lifespan: Adult Apis mellifera scutellata workers attain a body length of around 19 mm, which is only slightly smaller than the average European honeybee length. Female worker bees live for around a month while male drones survive for 5-10 weeks. Queens typically live for 1-3 years (ISSG 2005).

Abundance: Africanized honeybees have been found in 14 Florida counties and are now considered to be established in the state.

Reproduction: Reproduction is fascinating, complex, and an extensively studied facet of honeybee life history. A cursory overview is presented here:

When queen honeybees mate with male drones, the fertilized eggs that are produced are destined to hatch into sterile female workers unless, as larvae, they are fed large quantities of royal jelly secreted by hive workers. The royal jelly diet causes larvae to mature into young reproductive queens. Queens can also produce unfertilized eggs, which mature into reproductive male drones (Breed 2003).

The actual mating between honeybee queens and drones occurs during swarming events when the old queen, young queens, drones, and about half of an established colony's workers leave the nest to establish new ones. Seasonal synchrony in reproductive swarming ensures that drones from many different colonies are available to mate with emerging queens, thus minimizing the effects of inbreeding. Queens are capable of mating with multiple drones whose sperm they then store and use to fertilize eggs for their entire lifetime (Breed 2003, Collins 2006).

European honeybees and Africanized honeybees exhibit important differences in swarming behavior that are key to the successful spread of the Africanized strain. Where both strains co-occur, European honeybee queens mate disproportionately with Africanized drones. This is believed to happen both because Africanized bees produce more drones per colony than European bees and also because queens inseminated by both Africanized and European drones will preferentially use the African semen first in the production of the next generation of offspring. Additionally, Africanized colonies mature at a faster rate, allowing more swarms to split off from a hive in a given amount of time, again conferring an advantage upon the Africanized reproductive individuals (Kaplan 2004). Other reproductive differences conferring a competitive advantage on Africanized honeybees are described below.

If young queens are isolated from Africanized colonies, they will have only resident European drones with which to mate. Such mating results in offspring with diluted African tendencies toward aggression (Sanford and Hall 2005). As the numbers of Africanized colonies increase in an area, however, the incidence of mating between Africanized queens and drones will also increase, resulting in more aggressive progeny.

Embryology: Africanized honeybee queens are capable of producing 1,500 eggs a day. Most of these are destined to become workers, some will become drones, and a few will become new queens. Larvae hatch out is just three days, as opposed to more than a week in European bees. Initial growth is also extremely rapid. Fed nectar and pollen by adult workers, larvae attain 900 times the initial weight of the egg in under one week (Winston 1992).

Temperature: Africanized honeybees are descended from stocks that evolved in the tropics and, as such, are ill-equipped to withstand prolonged cold winters. They are believed to be limited to tropical and subtropical habitats.

A study by Abramson et al. (1997) supports the belief that Africanized honeybees are behaviorally and physiologically unsuited to low temperatures. Bees abandoned a hive experimentally maintained at 9°C after 14 days, while survivorship of individual bees exposed to 0°C for 4 hours was low.

Water Availability: Apis mellifera scutellata evolved in the arid environment of eastern and southern Africa. Until quite recently (ca. 2005, but see below) migration of A. m. scutellata eastward from Texas had been largely suppressed. Villa et al. (2002) suggest that the relatively high precipitation (greater than 125 cm/year) in the southeastern United States was a key reason why Africanized bees failed to establish populations east of Texas.

Trophic Mode: Like all honeybees, Apis mellifera scutellata feeds on nectar and pollen. Pollen is the chief source of dietary protein and nectar (and honey, once it is made through partial digestion of nectar by workers), is the chief source of carbohydrate. Honey is stored in honeycombs in the hive, and the honey stores are relied on heavily during the winter or when foraging conditions become poor. However, the tropical A. m. scutellata does not stockpile honey to the degree that European bees do (ISSG 2005).

Africanized honeybees are more solitary in their foraging than European bees and they often forage in adverse conditions where European bees would cease foraging (Camazine and Morse 1988, Winston 1992). They are also more likely to abandon their nests during periods of low food availability to establish new nests elsewhere. This behavior is characteristic of tropical honeybee strains evolved in areas experiencing frequent, prolonged adverse environmental conditions (Camazine and Morse 1988, Schneider 1990).

Associated Species: Apis mellifera scutellata co-occurs with and typically hybridizes with or outcompetes the European honeybee strain in Florida.

Invasion History: The history of the introduction of Apis mellifera scutellata to the Americas is well-documented. The strain was first domesticated in the scrub desert environment of central South Africa and became known as an aggressive but productive, disease-resistant strain that produced quality honey.

Growth of the honey industry in Brazil In the 1950s was tempered by relatively poor performance of imported European honeybees. In 1956 the Brazilian government sent a geneticist named Warwick Kerr to collect African honeybee queens to bring back for experimental breeding. Interbreeding African queens and European drones (via artificial insemination) produced the hybrid strain that came to be known as Africanized honeybees (Kerr 1967, Winston 1992).

The accidental release by a Brazilian beekeeper of more than two-dozen AHB queens in 1957 led to widespread hybridization with naturalized European honeybee populations. The reasonable assumption that outcrossing would quickly dilute the aggressive tendencies of the Africanized strain proved to be incorrect as reports of feral bee swarms attacking livestock began to multiply.

Africanized honeybees spread rapidly through continued outcrossing with naturalized honeybee populations, from Brazil up though South America and into Central America and Mexico. The strain first arrived in the United States in 1990, when they were identified near Hidalgo, TX (Kaplan 2004).

From 1995-2005, A. m. scutellata were captured in bait hives maintained by Florida Department of Agriculture and Consumer Services staff at shipping ports such as Jacksonville, Miami and Tampa. Throughout this period, Africanized bees appeared unable to gain a foothold in the state (Woods 2005).

As of 2005, however, established A. m. scutellata populations have been documented in more than a dozen counties in peninsular Florida. The arrival in Florida appears to be disjunct to the spread of A. m. scutellata from Texas. More likely, Florida introductions were human-facilitated as shipping, trucking, and/or rail transport may have accidentally carried undetected Africanized bees into the state.

Potential to Compete With Natives: The rapid spread of Apis mellifera scutellata into new areas is largely accomplished through hybridization with naturalized European honeybees. The reproductive advantages enjoyed by A. m. scutellata (see above) typically allow it to eventually dominate areas formerly occupied by naturalized European strain colonies (Kaplan 2004).

European honeybee colonies can also be directly taken over by Africanized bees. Takeovers are perpetrated by swarming or absconding queens and a contingent of workers and appear to primarily be a means to gain access to favorable nest sites, food resources, and/or large worker populations (Vergara et al. 1993). Queenless colonies and small or failing colonies are most likely to be taken over but large, strong colonies can be infiltrated as well (Rinderer and Helmich 1991) The actual process of colony takeover is complex and not entirely understood, but it involves the initial acquisition of the resident colony odor by invading Africanized bees prior to hive invasion and killing of resident queens if present (Vergara et al. 1993).

Possible Economic Consequences of Invasion: Honeybees may be the most economically important insects in the world. The first European honeybees were brought to the New World perhaps three centuries ago, and the economic benefit of this historic introduction here and elsewhere throughout the world is incalculable. In addition to producing honey and beeswax, honeybees also pollinate a great many agricultural crops. A 2007 New York Times article cited a Cornell University study estimating the annual value of honeybee crop pollination in the U.S. at more than $14 billion.

The notion that African honeybees are "killer bees" is largely hyperbole, although a handful of U.S. fatalities (and at least 175 from Mexico since 1985) indicate that Africanized hives should be treated with caution. Although the sting of a single Africanized bee is no worse than that of a single European bee, Africanized bees do swarm more readily and defend the hive more aggressively than European varieties.

If the number of Africanized bee colonies continues to expand, takeovers of cultivated European hives by Africanized queens during periods of high swarming could cause considerable problems for Florida beekeepers. Potential economic problems for Florida beekeepers if their stocks became Africanized are probably those relating to the tendencies of A. m. scutellata for producing less stored honey and for excessive swarming and nest abandonment (absconding). None of those attributes are desirable in cultivated honeybee hives.

Villa J.D., Rinderer T.E., and J.A. Stelzer. 2002. Answers to the puzzling distribution of Africanized bees in the United States or "Why are those bees not moving east of Texas?" American Bee Journal 142:480-483. 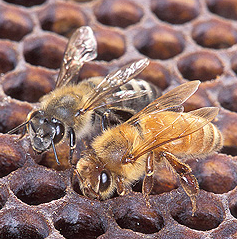