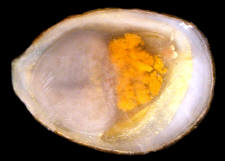 Species Description: The family Calpytraeidae is made up of three genera: Crepidula (slipper shells), Crucibulum (cup and saucer shells) and Calyptraea (hat shells). All of the species have limpet-shaped shells with an internal shelly septum. The genera are distinguished by shell morphology. In Crepidula the shell apex is directed posteriorly and the internal septum is a flat shelf that attaches along both sides of the shell. In Crucibulum the shell is conical with a central apex and a cup-shaped internal septum. In Calyptraea the shell is conical with a central apex but the internal shelly septum is a coiled ramp. Shells are often not diagnostic on the species level. Cryptic species often co-occur but they can usually be distinguished on the basis of developmental characters and body pigmentation. There are 6 species of Crepidula, one Crucibulum and one Calyptraea reported from Florida: Crepidula ustulatulina, C. depressa, C. atrasolea, C. aculeata, C. maculosa and C. fornicata, Crucibulum auriculum, and Calyptraea centralis.

Crepidula atrasolea (formerly C. cf. plana) can be distinguished from other Crepidula species by the following suite of characters. The flat white shell ranges from recurved to somewhat convex depending on the habitat of the individual. Animals from exposed substrates are often oval and convex with a more robust shell. The shelf is flat in convex shells and convex in recurved shells, with a notch on the right side where it attaches to the shell and also a depression in the center of the shelf margin. Muscle scars are absent. Apex at the shell margin usually directly posterior, sometimes slightly recurved to the right. The shell is white, inside and out.

Potentially Misidentified Species: Crepidula atrasolea is easily confused with 2 congeners, C. depressa and C. plana; both of which occur in the North Atlantic. C. atrasolea co-occurs with C. depressa along the coast of Florida and can be distinguished from C. depressa by the black pigmentation on the foot and direct development. C. plana has a white foot and planktonic larvae, like C. depressa but occurs from Nova Scotia south to Georgia and its range may extend into Florida. These three North Atlantic species cannot be distinguished on the basis of adult shell morphology. Species with similar shells also occur in California, Chile, New Zealand, and the Mediterranean. C. atrasolea has both a flat, white shell and a black or sooty foot.

Regional Occurrence: Crepidula atrasolea occurs on both the Gulf and Atlantic coasts of Florida, including the Florida Keys, and extending north to north through the Carolinas to eastern Canada.

Age, Size, Lifespan: Males of Crepidula atrasolea (formerly C. cf. plana) are characteristically smaller than females. Minimum, typical and maximum sizes for males are: 1, 5 and 8 mm respectively; for females, these sizes are: 5, 10 and 16 mm. Longevity for males is typically 6 months but females can live for 2 years. However, the size and sex change of Crepidula atrasolea often depends on the social structure of a population as well as on environmental conditions.

Reproduction: All calyptraeids are protandric hermaphrodites. Small, young animals are males that later change to females as they grow. All species copulate. Females are able to store sperm for several months. The females deposit eggs into transparent capsules that they brood between the neck and the propodium. In some species, swimming larvae hatch from the capsules; in others, benthic juveniles crawl away from the capsules. Crepidula atrasolea has as many as 6 reproductive periods per year, producing from 100 to 200 young. Reproductive seasonality peaks during the summer for this species.

Embryology: Eggs in Crepidula atrasolea are brooded. Typical larval development time is 21 days, but can range from 14 to 28 days. Development is direct. Uncleaved eggs average 335mm in diameter and there are usually fewer than 20 eggs/capsule. Hatchlings with mean shell length of 1.02 mm crawl away from the mother.

Salinity: Crepidula atrasolea is oligohaline to euryhaline. Salinity ranges; recorded from a data logger in the Indian River Lagoon show that this species tolerates salinities between 15 - 38 ppt.

Habitat: Crepidula atrasolea prefers epibenthic habitats in shallow oyster reefs, often near mangroves. It is most common intertidally to subtidally, but prefers slow moving waters with with low wave exposure. Typical maximum water depth is to at least 20m. In the Florida Keys, it is commonly found subtidally in shells inhabited by hermit crabs. 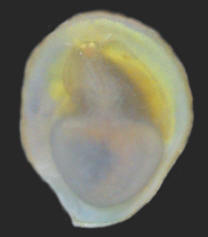 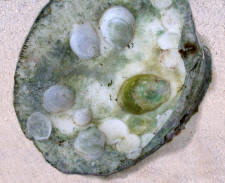