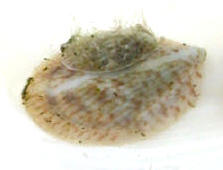 Species Description: The family Calpytraeidae is made up of three genera: Crepidula (slipper shells), Crucibulum (cup and saucer shells) and Calyptraea (hat shells). All of the species have limpet-shaped shells with an internal shelly septum. The genera are distinguished by shell morphology. In Crepidula the shell apex is directed posteriorly and the internal septum is a flat shelf that attaches along both sides of the shell. In Crucibulum the shell is conical with a central apex and a cup-shaped internal septum. In Calyptraea the shell is conical with a central apex but the internal shelly septum is a coiled ramp.

Shells are often not diagnostic on the species level. Cryptic species often co-occur but they can usually be distinguished on the basis of developmental characters and body pigmentation. There are 6 species of Crepidula, one Crucibulum and one Calyptraea reported from Florida: Crepidula ustulatulina, C. depressa, C. atrasolea, C. aculeata, C. maculosa and C. fornicata, Crucibulum auriculum, and Calyptraea centralis.

Crepidula ustulatulina is distinguished from other species by the following suite of characters: the shell is small (usually less than 1.5 cm), smooth, and convex. It is often cream with distinct chestnut brown spots or streaks, sometimes it is brown overall with darker spots or streaks. The internal septum is flat and white, and the animal's left side usually extends somewhat farther forward than does the right side. The margin is straight or slightly bowed. There is an oval muscle scar just anterior to the shelf on the animal's right side. The small apex is usually directly posterior and is slightly rostrate in animals living on small snails but not in those from flat substrates. The external body color is light to dark gray with opaque white or cream on the tips of the tentacles and the lips. There are usually large yellow pigment splotches on the mantle, neck and sometimes foot, visible only in life.

A sister species to C. ustulatulina, C. convexa, occurs along the coast of New England at least as far south as Georgia. Since the southern extent of its range is not known, it is possible that C. convexa occurs in Florida. It can be distinguished from C. ustulatulina by the fact that the hatchlings crawl away from the mother, by the morphology of the salivary glands, and by differences in allozymes and DNA sequences.

Other similar but distinct species occur in the southern Caribbean (Crepidula cf. convexa from Panama and C. navicula). These have small convex shells but instead of being spotted or streaked the shells are flecked with cream and dark brown and there is no muscle scar anterior to the septum in these species.

Regional Occurrence: This species occurs throughout the Gulf of Mexico and along the east coast of Florida north to at least Fort Pierce. It is common in the low intertidal and shallow subtidal, often on dead clam shells and on columbellids and cerithids in or near seagrass. Those living on large flat substrates are oval in shape, but those on small snails are highly arched and often compressed on the left side.

IRL Distribution: Crepidula ustulatulina is likely to occur throughout the IRL, to date however, it has not been documented north of Ft. Pierce.

Locomotion: Crawls. Hatchlings are briefly planktonic, swimming freely for approximately an hour before settling to the benthos.

Reproduction: All calyptraeids are protandric hermaphrodites: small, young animals are males that later change to females as they grow. All species copulate. Females are able to store sperm for several months. The females deposit eggs into transparent capsules that they brood between the neck and the propodium. In some species, swimming larvae hatch from the capsules; in others, benthic juveniles crawl away from the capsules. Crepidula ustulatulina embryos hatch as swimming pediveligers.

Embryology: The large eggs (300-340mm) produce direct developing embryos with a smooth shell, and an average length of 744mm at hatching. The large embryonic velum is not absorbed prior to hatching and the embryo hatches as a swimming pediveliger. The non-feeding larvae settle within an hour of hatching. There are between 3 and 16 eggs in each capsule and the number of eggs per capsule increases with female size.

Habitat: Crepidula ustulatulina is common in the low intertidal and shallow subtidal, often on dead clam shells and on columbellids and cerithids in or near sea grass. Those living on large flat substrates are oval in shape but those on small snails have highly arched and often compressed on the left side.