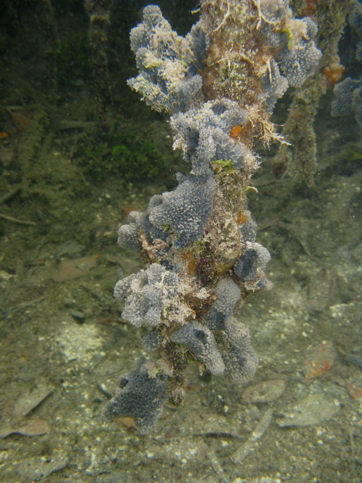 Species Description: The ethereal sponge, Dysidea etheria is a massive to semi-encrusting, commonly lobate species (Wiedenmayer 1977). The lobes are often elongate, lamellar or digitate. Live specimens are light blue throughout, although the exopinacoderm may be brownish grey. The consistency in life is softly spongy, highly compressible and limp. Dried specimens are quite fragile. Sharply pointed conules 3 mm apart and at least 1 mm high adorn the sponge surface. The oscules are frequently located on the tops of the lobes, 5-10 mm wide, with thin, transparent iris-membranes. The openings in the oscular membranes are sometimes compound. The exopinacoderm is thin and semitransparent, and the choanosome is fleshy. The skeleton is an irregular, loose fibroreticulation, with white fibers loaded with calcareous debris. The secondaries are not very distinct and contain less foreign material. The primaries usually branch and connect at low angles.

Habitat & Regional Occurrence: D. etheria occurs in lagoons on unconsolidated sediment, attached to algae or blades of turtle grass, Thalassia testudinum (Wiedenmayer 1977). This species is also found encrusting rocky bottom areas, or growing over organisms such as hard corals or other sponges.

Predators: Although chemicals produced by D. etheria serve as a defense against many predators (e.g., Waddell & Pawlik 2000), some organisms have been observed to prey upon the sponge. These predators include the sea star Echinaster echinophorus, and most notably, the nudibranch Hypselodoris zebra (e.g., Grode & Cardellina 1984).

Associated Species: Several other sponge species can be found along with D. etheria. However, the ethereal sponge appears to have a competitive advantage over other sponges and is rarely overgrown by its neighbors (Engel & Pawlik 2005).

Apopyle: Outlet from a flagellated chamber to an excurrent canal in leuconoid sponges.

Archaeocytes: Large cells with large nuclei; phagocytic and play a role in digestion; also known to be totipotent, capable of transforming into other cell types needed by the animal. Archaeocytes serve a variety of functions from engulfing large food particles to transporting nutrients, and in some sponges, they play a pivotal role in reproduction.

Choanocytes: Cells responsible for moving water through the sponge and for obtaining food; ovoid with one end adjacent to the mesohyl and the opposite end projecting into the spongocoel and bearing a flagellum surrounded by a collar of microvilli.

Incurrent Canals: Tubular invagination of the sponge pinacoderm that leads into the flagellated chambers.

Leuconoid: Refers to a type of sponge organization built around flagellated chambers and an extensive system of canals that increases the efficiency of water movement. The largest species of sponge have this body type.

Mesohyl: A gelatinous, proteinaceous matrix that lies beneath the pinacoderm, containing skeletal material and ameboid cells; equivalent to the connective tissue of other metazoans; sometimes referred to as the mesenchyme.

Microscleres: Spicules that are considerably smaller than the structural megascleres.

Ostium: A small opening perforating the surface of asconoid sponges; also called a incurrent pore, from which the name Porifera is derived.

Pinacocytes: Epithelial-like flattened cells which cover the outer surface, making up the pinacoderm.

Porocyte: A ring-shaped cell that extends from the external surface to the spongocoel, making up each pore.

Prosopyle: Internal opening of a sponge through which water flows from the incurrent canal into a radial canal or flagellated chambers.

Sclerocytes: Cells involved in the secretion of spicules in calcareous sponges.

Spiicules: Can be siliceous or calcareous and of various morphologies or shapes, including simple rods (monaxons) to more complex forms with three (triaxons), four (tetraxons), or more (polyaxons) axes. Spicules, along with spongin, provide structural support, and are considered to be an anti-predator mechanism. They are also a helpful diagnostic tool for sponge identification.

Spongin: A collagenous, fibrous protein that, along with the spicules, forms the “skeleton” of most sponges.

Spongocoel: Interior cavity of the sponge, also known as the atrium, into which water flows.

Syconoid: Radially symmetrical sponges that have a body wall folded into radially-oriented canals.