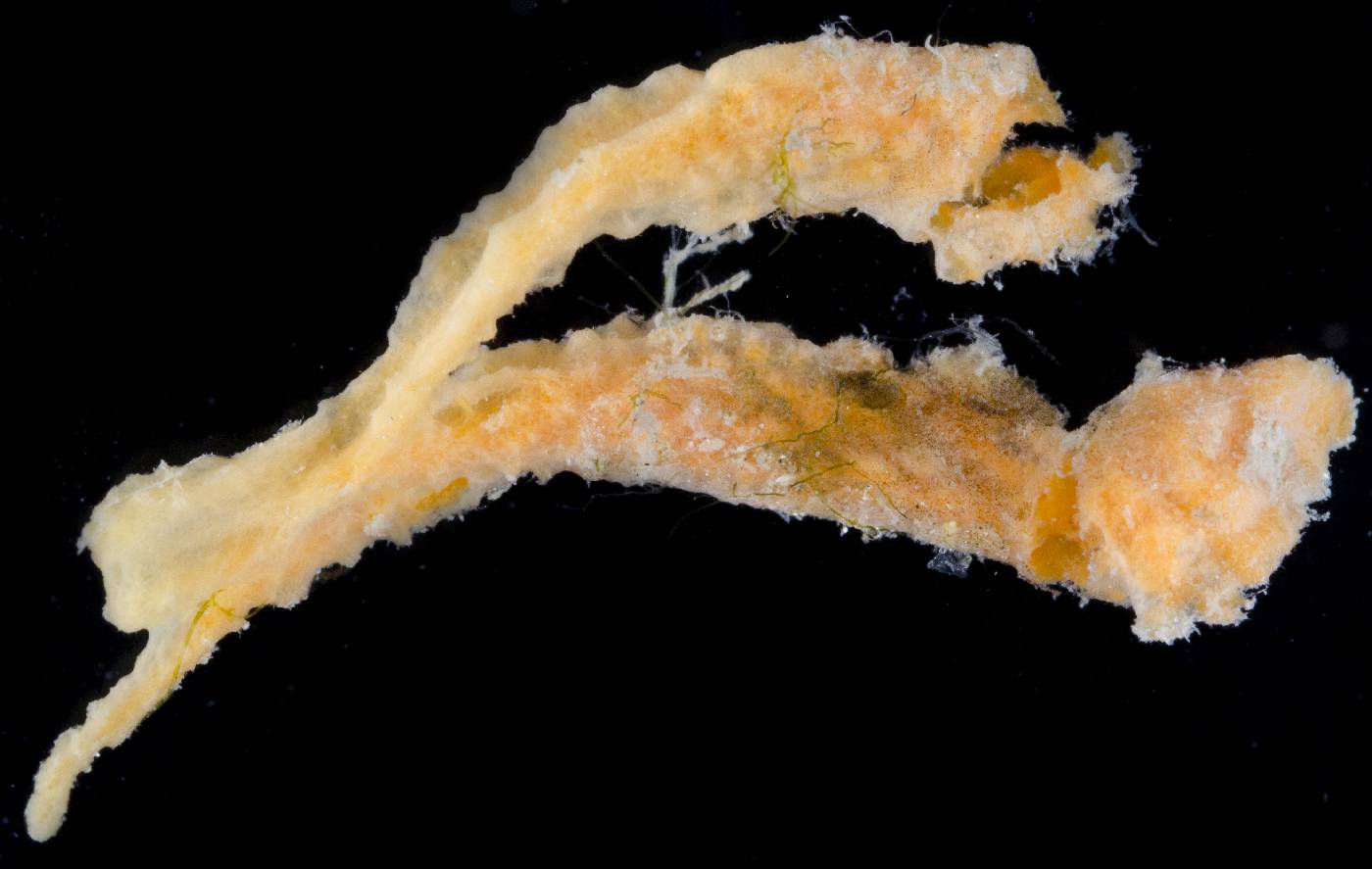 Species Description: The sun sponge, Hymeniacidon heliophila, is amorphous-lobulate in shape (Wiedenmayer 1977). The base is 1-3 cm thick, with crowded, erect chimneys, fistules and uneven digitations that rise from a few millimeters to 4 cm high. Live specimens are generally yellow to yellow-orange, with a soft, limp, and fragile consistency. Specimens growing under high sunlight are lighter yellow to olive, while those in shady areas are often a more intense orange to reddish-orange (Ruppert & Fox 1988). Dried individuals are off-white and brittle (Wiedenmayer 1977). The underside and interstitial surfaces are smooth, and the sides and projections are finely conulose, denticulate or lacinulate. Fasiculate or denticulate ridges usually appear on the chimneys. Algae, sediment, shells and rock fragments often cover the surface. The oscules are inconspicuous, hidden in the interstices or on top of the chimneys. Tangentially placed spicules are found in the ectosome, with a few feathery tracts where spicules are less abundant. Echinating spicules are found in the longitudinal ridges and laciniulae. The choanosome is cavernous, with spicules haphazardly arranged in papyraceous sheets or in random tracts. The spicules are variable in size, straight or slightly curved, usually fusiform, from 150 to 440 μm long and 4 to 7 μm wide.

Potentially Misidentified Species: H. heliophila is similar to Lissodendoryx stigmata, although the two species do not commonly occur in the same area (Wiedenmayer 1977). L. stigmata is more brilliant orange-red externally, and usually displays a difference in color between the ectosome and the choanosome. The surface is rarely smooth, bearing more pronounced, coarser lacinules and tubercules. The choanosomal tracts are stouter than those in H. heliophila.

Habitat & Regional Occurrence: According to surveys of Bahamian populations, H. heliophila appears to prefer shallow, sheltered, euryhaline areas (Wiedenmayer 1977). This species has been found in deeper oceanic waters subject to tidal currents, although these specimens lacked the digitate processes characteristic of their shallow-water counterparts.

Associated Species: The loose, open organization of this sponge provides habitat for a variety of smaller animals, including the spiny brittle star, Ophiothrix angulata (Ruppert & Fox 1988) and the nematode, Leptosomatum acephalatum (Timm 1953).

Economic Importance: Like many other species of marine sponges, the sun sponge produces chemical metabolites that are isolated, identified and studied for potential pharmaceutical and antifouling uses (e.g. Henrikson & Pawlik 1995).

Apopyle: Outlet from a flagellated chamber to an excurrent canal in leuconoid sponges.

Archaeocytes: Large cells with large nuclei; phagocytic and play a role in digestion; also known to be totipotent, capable of transforming into other cell types needed by the animal. Archaeocytes serve a variety of functions from engulfing large food particles to transporting nutrients, and in some sponges, they play a pivotal role in reproduction.

Choanocytes: Cells responsible for moving water through the sponge and for obtaining food; ovoid with one end adjacent to the mesohyl and the opposite end projecting into the spongocoel and bearing a flagellum surrounded by a collar of microvilli.

Incurrent Canals: Tubular invagination of the sponge pinacoderm that leads into the flagellated chambers.

Leuconoid: Refers to a type of sponge organization built around flagellated chambers and an extensive system of canals that increases the efficiency of water movement. The largest species of sponge have this body type.

Mesohyl: A gelatinous, proteinaceous matrix that lies beneath the pinacoderm, containing skeletal material and ameboid cells; equivalent to the connective tissue of other metazoans; sometimes referred to as the mesenchyme.

Microscleres: Spicules that are considerably smaller than the structural megascleres.

Ostium: A small opening perforating the surface of asconoid sponges; also called a incurrent pore, from which the name Porifera is derived.

Pinacocytes: Epithelial-like flattened cells which cover the outer surface, making up the pinacoderm.

Porocyte: A ring-shaped cell that extends from the external surface to the spongocoel, making up each pore.

Prosopyle: Internal opening of a sponge through which water flows from the incurrent canal into a radial canal or flagellated chambers.

Sclerocytes: Cells involved in the secretion of spicules in calcareous sponges.

Spiicules: Can be siliceous or calcareous and of various morphologies or shapes, including simple rods (monaxons) to more complex forms with three (triaxons), four (tetraxons), or more (polyaxons) axes. Spicules, along with spongin, provide structural support, and are considered to be an anti-predator mechanism. They are also a helpful diagnostic tool for sponge identification.

Spongin: A collagenous, fibrous protein that, along with the spicules, forms the “skeleton” of most sponges.

Spongocoel: Interior cavity of the sponge, also known as the atrium, into which water flows.

Syconoid: Radially symmetrical sponges that have a body wall folded into radially-oriented canals. 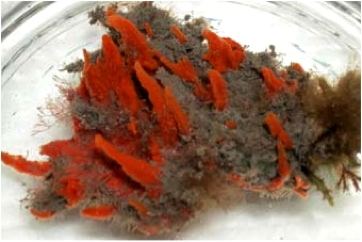