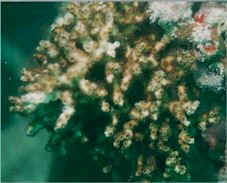 Species Description: Occulina diffusa generally forms dense colonies up to 12 inches in diameter on short, crooked branches. Color is often a yellow-brown, but this feature can be obscured by other organisms which encrust the coral. This species prefers shallow areas high in sedimentation, to depths of 3 - 75 feet, though it rarely occurs below 40 feet.

IRL Distribution: While it does occur within the Indian River Lagoon, O. diffusa is found primarily on nearshore reefs off east central Florida.

Abundance: Oculina diffusa is common in nearshore reefs off Florida, though it can be found within the Indian River Lagoon, especially around inlet areas.

Reproduction: Single polyps which have been sexually produced settle and attach to a substratum where they bud asexually to give rise to entire colonies.

Salinity: Salinities recorded for Oculina diffusa off Ft. Pierce, Florida ranged from 26 - 36.4 ppt. In the Indian River Lagoon, salinities for O. diffusa may be as low as 15 ppt.

Habitat: Oculina diffusa can be found on nearshore limestone ledges of 0.5 - 2.0 m relief. It is also found in the Indian River Lagoon and the Intracoastal Waterway. Typically, it is found at depths from 2 - 3 meters to 10 - 20 meters.

Benefit in the IRL: Oculina diffusa has a positive economic impact in the Indian River Lagoon by providing habitat for commercially and recreationally important fish and crustaceans, as well as some mollusks and annelids.

Goreau TF. 1959. The physiology of skeleton formation in corals. I. A method for measuring the rate of calcium deposition by corals under different conditions. Biol Bull 116: 59-75.

Acrorhagus: Cnidocyte-covered elevation on specialized sweeper tentacles or on the column of anthozoans.

Cnidocil: A short, stiff, bristle-like cilium that is borne on the cnidocyte and acts as a trigger for the cnida or nematocysts.

Coelenteron: The body cavity and gut of cnidarians and ctenophores; gastrovascular cavity.

Hydrorhiza: Horizontal rootlike stolon of a hydroid colony that grows over the substratum.

Mesoglea: Connective tissue layer between the epidermis and gastrodermis of cnidarians and ctenophores.

Ocellus: A small cluster of photoreceptors; a simple eye.

Oral Disk: Area around the mouth of an anthozoan polyp which bears eight to several hundred hollow tentacles.

Pedal Disk: In some sea anemones, a flattened disc at the aboral end of the column for attachment.

Planula: A cnidarian larva that is elongated and radially symmetrical but with anterior and posterior ends.

Septum: A double-walled tissue partition in the radial plane of a cnidarian.

Spirocyst: Cnida with a long adhesive thread that functions in capture of prey and in attachment to a substratum.

Tentacle: Evagination of the body wall surrounding the mouth which aids in the capture and ingestion of food.

Zooxanthella: A golden-brown alga, usually a dinoflagellate, that is symbiotic with various marine animals, especially cnidarians.