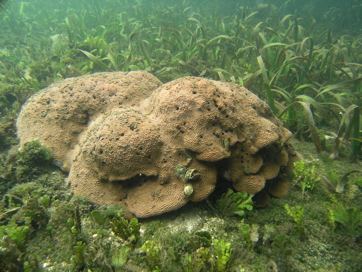 Habitat & Regional Occurrence: S. radians commonly occurs in Florida, the Bahamas and throughout the Caribbean (Humann 1993). Colonies generally inhabit shallow rocky reefs from the low tide line to about 10 meters, though specimens have been found down to 30 meters. In shallow water, small colonies may roll freely across the bottom with the surge, often in beds of turtle grass, Thalassia testudinum (Kaplan 1988, Humann 1993).

Environmental Tolerances: The lesser starlet coral is considered one of the most stress-tolerant coral species in the Caribbean. Colonies are often found in disturbed locations under less-than-ideal environmental conditions (Lewis 1989, Lirman et al. 2002). Studies of small colonies near Miami, Florida revealed that the coral can quickly regenerate lost tissue from remnants remaining deep within the corallites (Lirman et al. 2002). Colonies that were devoid of tissue on the exposed outer surfaces were completely recovered within 6 weeks.

Size & Growth: Colonies of S. radians are generally small, ranging in diameter from about 10 to 30 cm (Humann 1993). Unattached spherical colonies rolling through tropical seagrass beds are typically 2.5 cm in diameter (Kaplan 1988). Studies have suggested that the free-living morphology of some S. radians colonies gives the species a competitive advantage. In the absence of competition for space, these mobile colonies can grow larger than their encrusting counterparts (Lewis 1989).

Embryology & Reproduction: S. radians is considered a brooding coral species. Sperm from male colonies are released into the water column and transported to the females by waves and currents. Females take the sperm into their polyps where the egg cells are held. Once fertilization occurs, each egg develops into a planula larva. Planulae are released through the mouth of the polyps at an advanced stage, and generally settle onto hard surfaces shortly after spawning. S. radians spawns year round in Panama, where a single flattened elliptical egg measuring approximately 0.7 x 0.3 mm was observed per ovary, with 28 ovaries per polyp (Soong 1991). Planula larvae measuring 0.8 mm in length were also released throughout the year, most often before full moons.

Acrorhagus: Cnidocyte-covered elevation on specialized sweeper tentacles or on the column of anthozoans.

Cnidocil: A short, stiff, bristle-like cilium that is borne on the cnidocyte and acts as a trigger for the cnida or nematocysts.

Coelenteron: The body cavity and gut of cnidarians and ctenophores; gastrovascular cavity.

Hydrorhiza: Horizontal rootlike stolon of a hydroid colony that grows over the substratum.

Mesoglea: Connective tissue layer between the epidermis and gastrodermis of cnidarians and ctenophores.

Ocellus: A small cluster of photoreceptors; a simple eye.

Oral Disk: Area around the mouth of an anthozoan polyp which bears eight to several hundred hollow tentacles.

Pedal Disk: In some sea anemones, a flattened disc at the aboral end of the column for attachment.

Planula: A cnidarian larva that is elongated and radially symmetrical but with anterior and posterior ends.

Septum: A double-walled tissue partition in the radial plane of a cnidarian.

Spirocyst: Cnida with a long adhesive thread that functions in capture of prey and in attachment to a substratum.

Tentacle: Evagination of the body wall surrounding the mouth which aids in the capture and ingestion of food.

Zooxanthella: A golden-brown alga, usually a dinoflagellate, that is symbiotic with various marine animals, especially cnidarians. 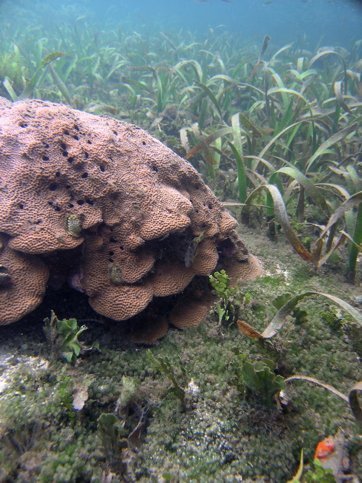