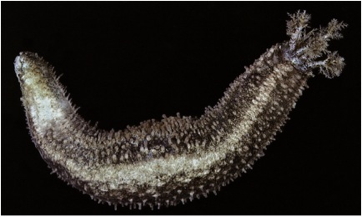 Species Description: The body of the striped sea cucumber, Thyonella gemmata, tapers toward a bluntly rounded mouth and narrows more severely toward the stiff anal cone (Hendler et al. 1995). The skin is rigid and rough, due to a thick body wall and dense layer of ossicles. The midbody exhibits conical tube feet, arranged in two distinct rows along the radii and scattered over the interradial areas, with the largest and most numerous tube feet occurring on the ventral surface. Conical papillae are found near the ends of the body. Ten bushy tentacles surround the mouth, the two smallest of which are on the ventral surface. Five calcareous plates surround the anus, one at the end of each radius. Five enlarged conical papillae are found anterior to each plate.

The body wall ossicles consist of buttons, baskets, rods and perforated plates (Hendler et al. 1995). The knobbed buttons are irregular and vary in length. The baskets are tiny, shallow, and bear seven to nine marginal teeth. Tube feet are adorned with large perforated plates and rods. Large perforated plates are also found on both the anterior and posterior portion of the body, but are generally replaced with buttons and baskets along the middle portion.

Body coloration is variable, from mottled gray, brown or olive green to uniform tan or black (Hendler et al. 1995). A striped appearance is usually visible from the lighter radial and darker interradial areas. In live specimens, the tips of the tube feet may appear red because of hemoglobin contained in the cells of the water vascular system.

Habitat & Regional Occurrence: T. gemmata inhabits burrows in muddy or sandy sediments, often in beds of the seagrasses Halodule or Thalassia (Hendler et al. 1995). The burrows are U-shaped with two circular openings about 3-8 cm apart, and freshly excavated individuals retain the characteristic shape of their burrows (Ruppert & Fox 1988). Unlike other holothurians in and around the IRL, this species is rarely discovered beneath rocks. Juveniles have been collected from macroalgae in Conch Key, Florida (Hendler et al. 1995).

T. gemmata is usually found at the low tide mark to 6 m, although it was been documented from sediments dredged as deep as 20 m near Daytona Beach, Florida (Hendler et al. 1995).

The range of T. gemmata extends from New England to Florida, along the Gulf of Mexico coastline to Texas, Cuba and the Yucatán Peninsula.

Indian River Lagoon Distribution: The distribution of T. gemmata within the IRL remains undocumented. However, this common sea cucumber is likely found throughout the lagoon in sheltered seagrass beds and other areas characterized by soft, muddy sands.

Abundance: T. gemmata is one of the most abundant sea cucumbers in the eastern Gulf of Mexico, occasionally washing ashore in large numbers after turbulent storms (Hendler et al. 1995).

Trophic Mode: The striped sea cucumber is primarily a suspension feeder, catching food from the overlying water column. However, it does deposit feed on organic material in the sediments. The deposit feeding behavior of this and other sea cucumber species has indicated the ingestion of small plastic pieces broken down in the sediment from marine debris (Graham & Thompson 2009).